This post concerns the observation of an unusual object, made by Matt, an Adelaide man. His account is as follows.

It appeared as a large, orange ball. At one stage, its angular size was given as a 10 cent piece in the sky. At one point, it was close enough to see detail. The description given, is silver on the bottom, orange on top, with some black banding between the two. It was emitting its own light. It moved against the wind.

Matt took photographs and a video of the object. Here are two stills ( second is a zoom). 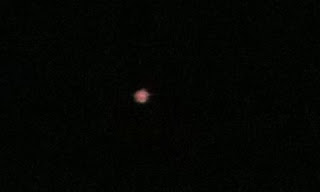 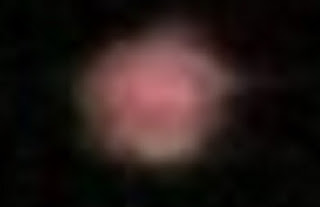 The question is, what was it?


Data
1. WebTrak:
I first consulted Air Service Australia's WebTrak secondary radar system website, to ascertain whether or not there were any aircraft in the sky at the time. 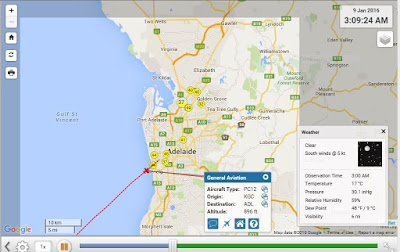 Above is an image of the secondary radar system from Adelaide airport for 3:09:24, As can be seen there was only one aircraft visible. An aircraft type PC12, flying between KGL and ADL was on approach to land at Adelaide airport. I ran the program between 0300 and 0330 and no other aircraft appears on the system.
2. Weather:
The weather details for Adelaide at 0300hrs were:
Temp =  18.4degC; 54% relative humidity; wind was calm; pressure 1019.1; no rain in last 24 hours.

3. Upper air winds:
Wind direction and wind strength at ground level, may of course be different from winds in the upper air. I checked the upper soundings for Adelaide airport for:
a. 1200hrs UTC on 8 January 2016 which equates to 2230hrs 8 January 2016 local Adelaide time, some 5 hours before the observation. 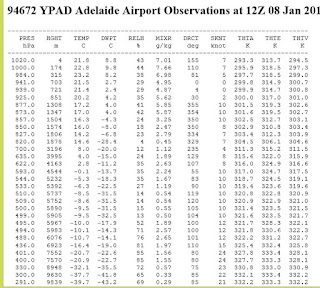 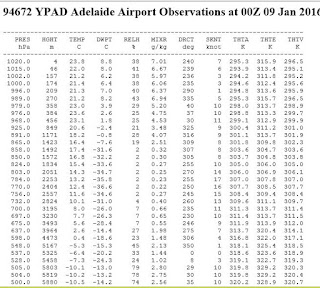 As can be seen from these tables, the winds at the surface are different to those at various heights above the ground.

I then went to an Internet based astronomical sky chart to ascertain what was in the sky at the time.

As can be seen on the above chart, the orange coloured planet Mars was low down on the eastern horizon.

Where were other planets?

The brilliant white coloured planet Jupiter was in the north-eastern sky, higher in elevation than Mars.


Questions
The observer kindly answered a number of questions which I posed to him. These were:
Q1. Did the light from the object flicker, or was it steady all the time?﻿
A1 "It was steady the entire time it was visible to me."

Q2. Have you ever seen hot air hoax garbage bag balloons? If so, how did this compare to what you saw on the 9 January?
A2. "Yes I have seen these and even launched one or two in my day. If it were to be one of these it was a very complex one, being spherical in shape with a silver  "undercarriage" attached to a possibly round orange garbag, points against this conclusion. The light was far brighter than emitted from what I have seen of these hoax's before. Steadily bright and visible for many kms, not being a geometry expert but 1km visible from horizon to horizon means many kms of travel. Travel across the prevailing wind direction. These hoax balloons travel on the wind  and with an elevation trajectory. I would launch a hoax balloon at a more reasonable time than 3.10am . Terrible timing if you wanting to start gossip."

Q3. What suburb were you in at the time?
A3 "Glenelg South."

Q4. What drew your attention to the object in the first place?
A4. "Outside on a clear night I notice what I called a unique coloured star low in the sky, as it was of the same size as the surrounding stars but the lowest of them all. As I watched, it grew in size as it moved towards me, ultimately not directly overhead but no less than 1 or 2 km south of me. Then continued on the same trajectory heading west."

Q5. How did you loose sight of the object?
A5. "I had clear sight of it right to the horizon, no buildings etc in my line of sight, then it was out of sight."

Q6. Did you see from where you were, the aircraft landing at Adelaide airport? How did it compare to the object?
A6. "No the airport is to the north of me, this object passed  south of me, hence I was between it and the airport. Again I have clear sight of the airport to the north and very familiar with incoming and outgoing flights, routes, trajectories and colours."

Discussion
1. Could the planet Mars have been the original stimulus?
The orange coloured planet Mars was indeed in the eastern sky, at the time. However, it does not move across to the western horizon in five minutes, and does not have the described structure. It was not the planet Mars.
2. Could it have been the International Space Station?
A check of the "Heavens Above" Internet astronomical website shows that there were no predicted passes of the ISS for that morning.  The size, and described structure does not fit the observation.
3. Could it have been an orange coloured hoax, hot air balloon? For three of my investigation reports which are very suggestive as to these balloons causing sightings, please see:
http://ufos-scientificresearch.blogspot.com.au/2015/09/report-from-cairns-queensland-17.html
http://ufos-scientificresearch.blogspot.com.au/2015/09/preliminary-investigation-report.html
http://ufos-scientificresearch.blogspot.com.au/2015/10/preliminary-investigation-report.html
There are some elements suggestive of such a balloon; orange coloured, steady trajectory; five minutes to go east to west horizon; wind direction which could have caused this at some altitudes; no noise. Against this is the reported silver on bottom, orange on top with some black banding between the two. In addition, the observer in answer to my question about hoax balloons, clearly sets out his reasoning for it not being one of these.
Conclusion
On the available information and data, I cannot see a mundane explanation which fits all the details of the observation. I would appreciate hearing from any blog readers who might have any suggestions as to what this object was. Of course, if anyone knows of any other observations of this particular object, please contact me via email keithbasterfield@yahoo.com.au
﻿