In a previous article, I located weather details for the date/time and location of the 4 March 2019 UAP photograph, taken by a weapon systems officer in a U.S. Navy aircraft. I utilized data available from the Upper Atmospheric Soundings database of the University of Wyoming.

Later that year, in July2019, several U.S. Navy Destroyers, reported a number of observations of what they referred to as "drones," off the West coast of the U.S.A. As part of a 23 March 2021 article on The Drive's War Zone blog, authors Adam Kehoe and Marc Cecotti, determined that one of the ships involved, the U.S.S. Russell (DDG-059) had reported numerous observations of "drones" on the evening of 15 July 2019. They secured a copy of the Russell's deck log for the period 14-16 July 2019 via a Freedom of Information Act request.

I wondered what the weather had been like at the location of the U.S.S. Russell on that night? Could obtaining the weather details led to any conclusions about the nature of the objects involved? Marc Cecotti kindly forwarded me a copy of the Russell's deck log. The observations stretched from 2115hrs local time to 2351hrs, with all but one seen between 2115 and 2237hrs. 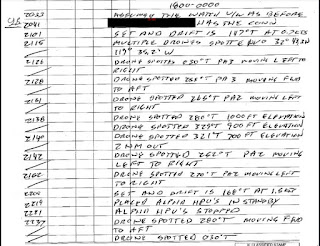 I was particularly interested that at 2140hrs the log recorded that a "drone" was sighted at a bearing of 321 degrees T, at a height of 700 feet and a range of 2 nautical miles. A trigonometrical calculation indicates this was a mere 3 degree elevation, above the horizon.

So, what was the weather like at the location of the Russell, given in the log as 32 degrees 43 minutes latitude North, and longitude 119 degrees 35 minutes West, at 2140hrs 15 July 2019? Given that this is a location at sea off the coast of California, the nearest land based Upper Atmospheric readings station was at San Diego. I considered this to be too far away to be accurate. I therefore turned to the National Data Buoy Center.  This Center is part of the National Oceanic and Atmospheric Administration's National Weather Service, and operates a large number of data collecting buoys at sea. 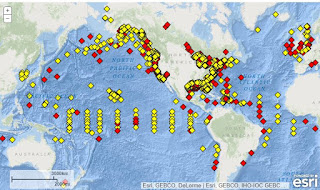 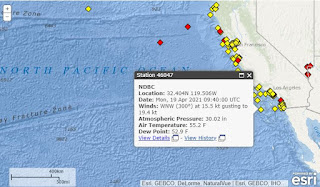 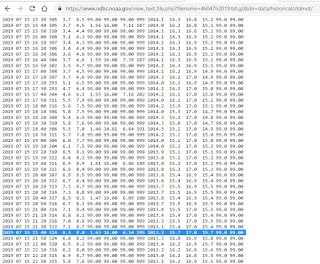 In summary, the relevant weather details from the buoy are that the wind at the time was from 324 degrees (roughly North West); at a speed of 6.3 metres per second (14 milers per hour); atmospheric pressure was 1013.2hPa; air temperature was 15.7 degrees C; and wave height was 1.63 metres. The visibility data is not available. The buoys do not record cloud details.

As a comparison, I also accessed details from the buoy's records for 2140hrs 14 July 2019, the previous night, when other destroyers, including the U.S. S. Kidd reported multiple 'drone" observations. A summary is as follows. the wind was from 295 degrees; at 5.5 metres per second; the pressure was 1015.7hPa; temperature was 14.8 degrees C; wave height was 1.68 metres. No visibility data available. 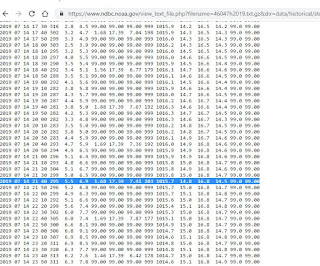 Marc Cecotti advised me that from other relevant ships' logs; he noted that it had been foggy at the time.

On the evening of the 15 Jul 2019 with the wind coming from 324 degrees (roughly North West) the Russell's log records the direction of observations as being from 030 degrees ( a single observation) through 252 degrees to 325 degrees (eight observations.) The 2140hrs observation was a bearing of 321 degrees T. The wind was blowing from almost exactly behind this "drone."

It seems to me, that it would be interesting to examine the bearings of "drone" observations made from all the ships involved; to see what relationship there is between the direction the wind was blowing; and the direction of observation of "drones."

In closing, I would like again to thank Marc Cecotti for sharing the Russell's deck log. It is this sharing of raw data, without withholding dates/times etc, which allows others to build on someone else's work. A most important aspect of networking. We are all in this together.

On 3 December 2020, an article authored by The Debrief's Tim McMillan revealed the existence of a UAP photograph taken from a United States military aircraft. The photograph was reportedly taken in the air by a weapon systems operator in an F/A-18 military jet aircraft, somewhere off the East coast of the U.S. McMillan reported having been told that the photograph had appeared in a 2018 intelligence report issued by the U.S. UAP Task Force (UAPTF.)

A check by me, of the metadata of the image shown by McMillan, indicated that this particular image was created on 4/03/2019, and not in 2018. I reached out to McMillan to point this out, and he advised that his understanding was that the image shown was a re-photograph of the original photograph. In other words, the metadata attached to the published photograph was not the original metadata. However, like me, a number of other commentators on the Internet felt that this was not a photo of a photo, but an original photograph taken on 4/3/2019. The earliest known appearance of the photograph within the UAP community, was traced back to February 2020.

In December 2020, detective work by Swedish based researcher, Roger Glassel, suggested that the reflection on the cockpit window was due to it being a reflection of the pilot's helmet. Glassel then deduced, that the aircraft was a U.S. Navy plane, belonging to Strike Squadron VFA-32. This squadron's home base was Naval Air Station Oceana, Virginia Beach, Virginia, U.S.A.

So, the best information at that point, was that the photograph was taken on 4 March 2019, off the east coast of the USA in a training area used by the VFA-32.

In an article dated 6 April 2021, Las Vegas journalist George Knapp revealed the existence of at least three UAP photographs taken on the same day, namely 4 March 2019. All by the same weapons system operator in an F/A-18 U.S. Navy aircraft; in the same geographic area, off the East coast of the U.S.A., and using nothing more sophisticated than an iPhone. These were:

3. At 3.14p.m. a photograph referred to as a "Metallic blimp," which appeared to have a  number of appendages.

Interestingly, another article on the unidentified-net, has the times of the photographs as 2.44; 3.02 and 3.16pm. and provides some metadata from all three photos, which I image below: 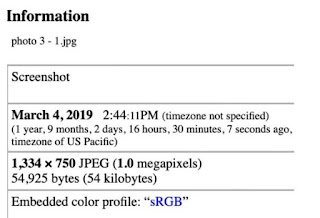 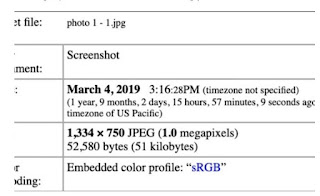 As the images provided by Knapp did not have any available attached metadata; I wondered where the unidentified website had gained the above three pieces of metadata?  A possible explanation lies in the unidentified website article, where the author writes that their understanding comes "...from a very informed source who actively had access to all photos and data..." Combined with Knapp's source of the photographs, it would appear that the UAPTF is leaking badly.

Initially, some researchers suspected that the photographs may not have been authentic. However, this was soon put to rest by U.S. researcher John Greenewald, who contacted the Pentagon.  The response, by Pentagon UAP spokesperson, Susan Gough, included the statement:

"I can confirm that the referenced photos...were taken by Navy personnel. The UAPTF included these incidents in their ongoing examinations."

Weather at the time

Each of the three UAP photographs in the Knapp article show blue sky with some cloud and appear taken from an altitude of perhaps 30,000 feet (9,100 metres.)   I checked the University of Wyoming's upper atmospheric soundings database for details. I image the information for the time nearest the UAP photographs, from station number 72402, situated at Wallops island, Virginia; and station 72403 situated at Stirling, Virginia. 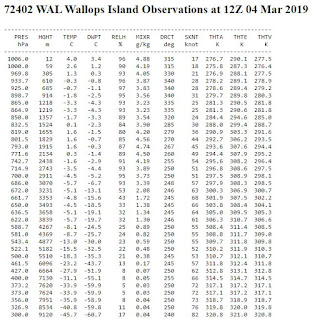 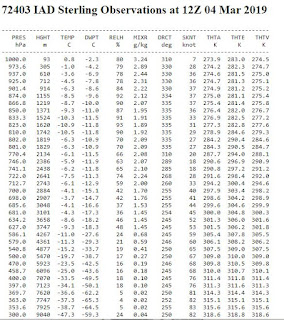 Here the outside temperature at 9,040m was -47.3 degrees Celsius; pressure was 300.0hPa; relative humidity 24%; wind from 250 degrees at a speed of 82 knots.
The above figures provided the best estimate of weather details at the location where the photographs were taken. I was particularly interested in the wind speed at that altitude, as there had been some mention that the "Acorn" object had been stationary at the time the photograph was taken; which on the available wind speed data above, meant that the object was holding position in an 82 knot wind from roughly the west ( which is 270 degrees.)
As for the weather at surface level, I found a site which provided the following data for Virginia Beach, Virginia. At 3p.m. the surface temperature was 45 degrees Fahrenheit; wind speed was 8 mph from the North. There was no precipitation. Cloud percentage was not given.
By Keith Basterfield at April 11, 2021 4 comments: