US researcher Barry Greenwood recently advised that the National Library of Australia's TROVE digitised newspaper collection, had announced that 33 more newspapers have been added.

In order to examine them for articles of interest to us, Melbourne researcher Paul Dean and I, divided these up, and each selected a number of newspapers to examine.

Paul reports on what he finds on his blog here. Below are five articles of interest which I found (post 24 June 1947.)


What did I find?

Firstly, Australians in the period 1947-1954 were being kept informed about the topic of "flying saucers" being reported and discussed elsewhere in the world. Here are two examples: 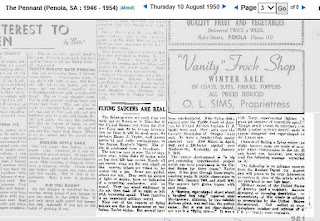 One Henry J Taylor, journalist and radio commentator in the August 1950 Reader's Digest states that flying saucers are made in the USA. 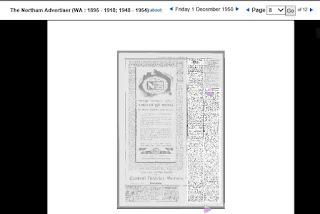 Reports from Denver that the bodies of 84 men ranging in height from 38 to 48 inches have been recovered from wrecked flying saucers.

A bright object was seen in the north eastern sky of Kalangadoo on Friday night." 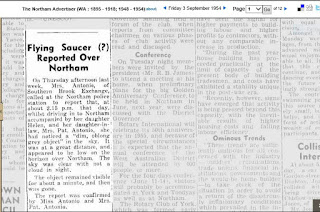 On Thursday afternoon last week, Mrs Antonio, of Southern Brook Exchange, called at the Northam Police Station to report that, at about 2.15pm that day whilst driving in to Northam accompanied by her daughter Helen, and her daughter-in-law, Mrs Pat Antonio, she had noted a "dim, oblong grey object" in the sky. It was at a great distance and appeared to be low on the horizon over Northam. The sky was clear with not a cloud in sight. The object remained visible for about a minute, and then was gone. The report was confirmed by Miss Antonio and Mrs Pat Antonio."

Thirdly, and this is new to me, I came across a reference to a "Flying Saucer Journal."

Apart from item five, these articles are representative of the hundreds already known from Australian papers.
By Keith Basterfield at January 10, 2016