Introduction
On 28 June 2012 I wrote a blog piece about the discovery of two Australian government files relating to the disappearance, in 1978, of pilot Frederick Valentich, over Bass Strait, Australia.
Last year, in September, while randomly checking the National Archives of Australia's RecordSearch database, I found a two part file which also relates to the disappearance.
The new file is NAA file series B638, control symbol M116/783/1047 parts 1 and part 2;  barcodes 10499635 and 10499636. Series B638 is comprised of 299 air safety, accident and incident files, where M stands for Melbourne.﻿

I immediately requested that the files, whose status was "Not yet examined" be examined. On 18 December 2015, I was advised that both parts of the file were now "open." I then submitted a request to have the file digitised, and paid the relevant fee.

The file had just been digitised. 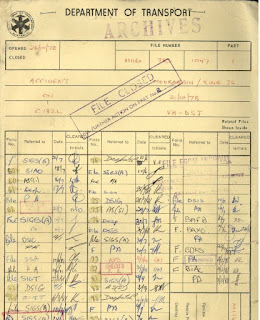 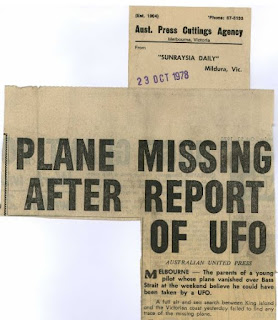 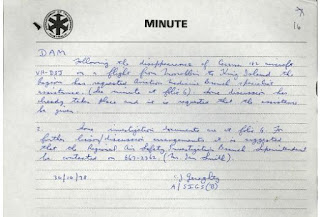 * a few, previously unseen typed and handwritten official minutes between individuals. However, even these really add very little to the debate as to what caused the disappearance. 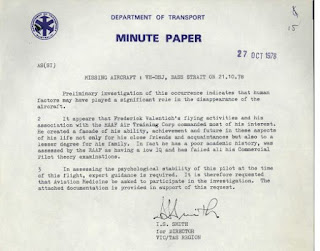 One interesting set of papers is a letter from Allan Brunt, Regional Director for South Australia for the Bureau of Meteorology. Allan was open to taking a look at UFO reports, and he and I had a series of discussions about specific sightings, such as the 1988 Knowles car lift case. 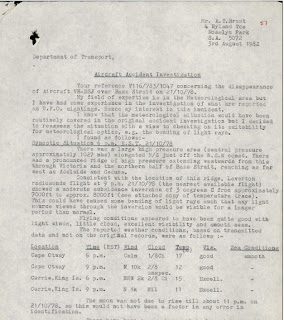 On 3 August 1982 Allan forwarded a three page letter to the Department of Transport about the disappearance. Amongst his comments was one in regards to the fact that the UFO reported by Valentich was not seen continuously but on three separate occasions. Allan wrote "This type of sighting is consistent with a multiple meteor observation or a "meteor shower" with not just one, but several phenomena in procession. From the evidence available, I am unable to rule out the possibility that the pilot of VH-DSJ was frightened by the appearance of one or more meteors and, fearing a collision, took evasive action, or being seriously distracted by the frightening phenomena, flew into the sea."
You can view the file
To take a look at the file for yourself, or to download the file's PDF, go to http://www.naa.gov.au and on the home screen type "dsj" into the "search the collection" window, and click on "go."
Finally, yet another Valentich file revealed
We now know of three Australian government files relating to the disappearance of Valentich. However, the latest file's inside cover reveals yet another, unknown file. This is a Department of Transport file number 123/1/30 titled "ASIB requests for information regarding accident to Cessna 182L aircraft VH-DSJ on 21/9/78." (This date of 21/9/78 is incorrect, it should be 21/10/78.) I checked the NAA's RecordSearch and this fourth file is not listed. I checked using words within its title, but found no trace of it in RecordSearch. Yet another mystery. ﻿
By Keith Basterfield at January 21, 2016

Email ThisBlogThis!Share to TwitterShare to FacebookShare to Pinterest
Labels: Valentich