Hal Puthoff talked about AATIP at MIT on 23 January 2019

"Excited to be in Cambridge, MA, where I'll be presenting a symposium today on advanced energy and propulsion at #MIT led by Charles Chase..."

"Nick is a best selling author of fifteen fiction and non-fiction titles in the US and the UK,...He is well known for his ground-breaking, best-selling non fiction work, "The Hunt for Zero Point." The book, published in 2002, reported on Cook's efforts to find out about the use of "anti-gravity" for propulsion. He interviewed a number of researchers in this field, as he travelled across the globe investigating the subject. It touched upon the UFO phenomenon. My co-blogger, Pauline Wilson, reported on the book, and Nick Cook in a 2010 post, which may be viewed here.

"The Independent Activities Period (IAP) is a special term at MIT that runs from early January until the end of the month. IAP 2018 will run from January 7, through February 1, 2019. IAP provides members of the MIT community (students, faculty, staff and alums) with a unique opportunity to organize, sponsor and participate in a wide variety of activities, including hot-to-sessions, forums, athletic endeavours, lecture series, films, tours, recital and contests."

One of the activities available is shown as "Advanced Propulsion."  The website advises that:

"The session will be led by Charles Chase, who recently retired from Lockheed Martin Skunk Works where he founded and ran the Revolutionary Technology Programs organization, developing a wide range of disruptive technologies. These included a new compact approach to hot fusion, novel electromagnetic beams, and engineered material for fusion and propulsion."

What was the session about? Again from the MIT website:

"We will be exploring the edges of our understanding of how to engineer the quantum vacuum and the space-time metric. We will have lectures from innovative professors and researchers in the field, and working salon-like discussions. We will cover theory, modeling, experimental approaches and fabrication techniques as we explore fundamental physical assumptions. We are focused on moving
the field forward, and based on discussions during the session, we will be developing the best next steps to further experimental and theoretical understanding..."

The list of speakers and topics is to be found here. 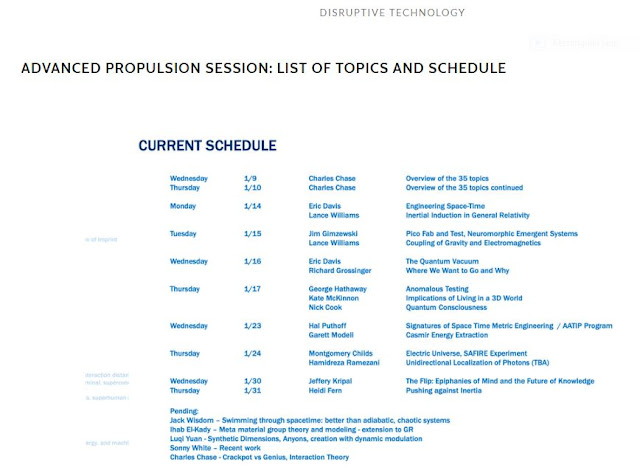 I look forward to seeing any documentation, lecture notes; symposium proceedings etc which this event generates.

One of the speakers, Richard Grossing has already published the full text of his talk. It can be viewed here.

I also just noticed that there is a list of 35 topics, apart from the speaker's schedule. 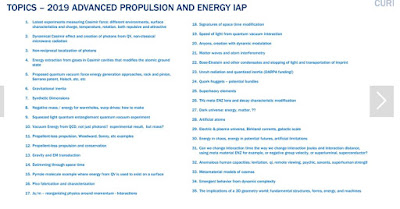