In a recent blog post, I noted that there had been a "secret" UAP study by the then Douglas Aircraft Company, around 1955. I just came across a further reference to this study, in Jacque Vallee's "Forbidden Science: Volume 1" page 286. In a diary heading of "Chicago Friday 30 June 1967," Vallee wrote:

"Now I am reading a letter to ATIC signed by  A H Rochlen, public relations vice-president, summarizing an independent analysis that was done by the Douglas Aircraft Corporation "within the framework of a study...having to do  with unconventional propulsion methods."

The study was headed up by Dr W B Klemperer, chief engineer of their missile division. The report was distributed to R M Baker and A M Chop, the same man who was in touch with Keyhoe in the early years and eventually became the spokesman for Project Blue Book. What was he doing on the staff of Douglas and what was the study of "unconventional propulsion?"

I wondered if it would be possible to locate a copy of the final report by Wolfgang Benjamin Klemperer? So, firstly I looked to see if papers by Klemperer had been archived somewhere. I found that the American Heritage Center, of the University of Wyoming, had 5.73 cubic feet, 10 boxes of his papers.  This collection "includes correspondence, photographs, reports and other materials regarding his career as an aviator and aeronautical engineer."

The University of Wyoming website has an inventory of these papers. However, a search through the inventory, although mentioning report titles such as "Report SM-11827: Preliminary Design of an Experimental World-Circling Spaceship" May 2, 1946, doesn't list a circa 1955 report on "unconventional propulsion."

However, when I conducted an Internet search using the keywords "W B Klemperer and unconventional propulsion" I came across a PDF which contained six documents from the study. I image these below: 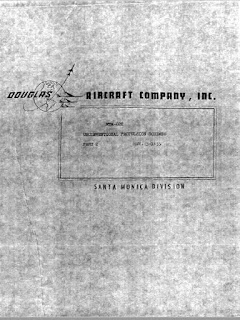 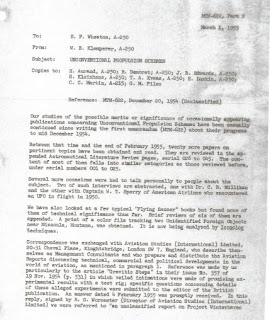 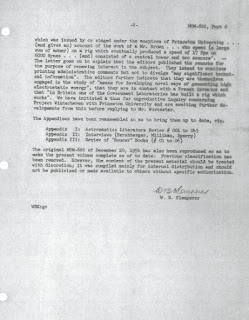 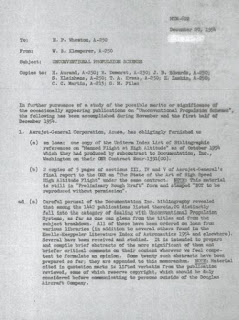 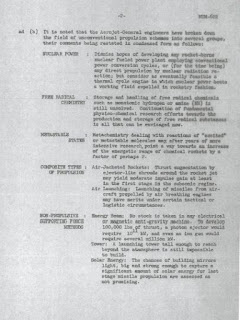 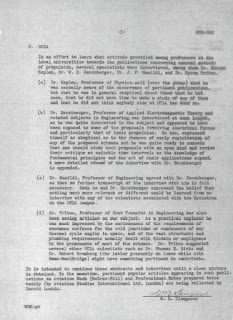 Image one is a cover sheet with the title "MTM-622 Unconventional propulsion schemes Part 2 REV 3-1-55."

Image two is a memo dated March 1, 1955 from W B Klemperer to E P Wheaton. It refers to them collecting papers on Unconventional Propulsion Systems. "Our studies of the possible merit or significance of occasionally appearing publications concerning Unconventional Propulsion Systems have been carefully continuing since the first memo (MTM-622) about the progress to mid-December 1954."

"Several more occasions were had to talk personally with people about the subject. Two such interviews are abstracted, one with Dr C B Millikan and the other with Captain W T Sperry of American Airlines who encountered a UFO in flight in 1950...We have also looked at a few typical "Flying saucer" books...A print of a color film tracking two Unidentified Foreign Objects near Missoula, Montana was obtained. It is now being analyzed by Iconolog techniques..."

1. Dr Clark Blanchard Millikin was a Professor of Aeronautics at the Californian Institute of Technology.

Gross reproduces a letter from the Douglas Aircraft Company to Wright-Patterson Air Force Base about the film. 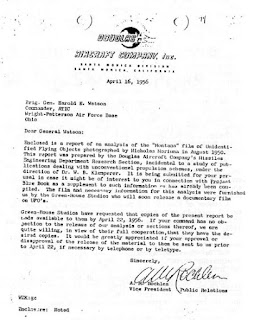 Image four is a memo dated December 20, 1954 from Klemperer to Wheaton listing publications obtained re unconventional propulsion schemes. It includes "the following has been accomplished during November and the first half of December 1954."

On another website I found  a piece titled "Full text of "1950's Top Secret Propulsion Documents Declassified Douglas Aircraft," and thought, is this the full study report? However, it turns out to be a part of the "Astronautical Literature Review" mentioned above, and not the full study.

On yet another website  I found 5PDF's of documents from the study:

PDF 1 was the 6 pages imaged above.

PDFs 2-5 are 42 pages from the "Astronautical Literature Review" section of the full report.

From the above material it is possible to list study participants. I provide links to information about them, where possible. They were:

One of the memos also lists people who received a copy of that memo. These are shown below, with links where possible:

At this point, I thought that I had obtained all the documents which I could, but deciding to be through I emailed the NICAP forum and asked if anyone had a copy of the full report? Next day, I received an email from Boston based researcher Barry Greenwood, our subject's premier historian. Barry sent me a 100 page PDF of documents from the study. These were: 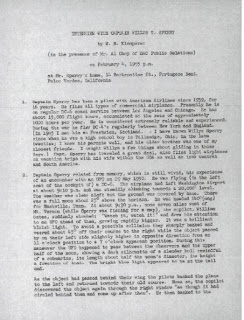 In 2016, an individual named William Tompkins came forward discussing his knowledge of UFOs and ETs. He was interviewed by radio show host Jeff Rense on 30 November 2016 and again on 9 December 2016. Links to these interviews are given below.

For my take on Tompkins book, please see my blog post  It should also be noted that Tompkin's name does not appear in any of the documents relating to the study, which I have seen.

The documentation so far located re the Douglas Aircraft Company 1954-1955 study of "Unconventional Propulsion Schemes/Systems" comprises:

* References to an analysis of the Montana movie.

It does show, that as part of the study they were interested in reviewing evidence for the topic of UFOs.

However, what we still lack is any sort of final report. I would welcome communication from any blog reader who might have this document.
By Keith Basterfield at January 11, 2019