I wondered if there had been any "secret" studies of UAP, undertaken by aerospace companies? So, I searched the UFO literature looking for any such studies. I came across the following:

In "Forbidden Science: Volume 2" p 336, Jacques Vallee has a diary entry which reads:

...I got an interesting call from a vice-president with Environmental Systems in Van Nuys who'd read Invisible College. As early as 1955 he belonged to a UFO group at Douglas Aircraft in Santa Monica. He worked there with Wheaten (now at Lockheed, in the submarine division) Ted Gordon, Klemperer and Dave Crook. They were asked by McDonnell management to assess cases from Blue Book, complete with photos and films. Their conclusion, which they were asked to "forget," was that the objects used multi-dimensional physics. He now claims they found no less than 2,000 sites in Owen Valley alone, including places where objects seem to go in and out of the solid ground."

Wood revealed the existence of a Project "BITBR" ("Boys in the Back Room".) During a management meeting in 1966 Wood said "...but the facts are that the UFO are indeed alien craft, and they have figured out some sort of gravity control device, as evidenced by their right-angled and high-g turns. So, the ONLY question in my mind is whether we are going to figure out how they work before or after Lockheed!"

So, McDonnell Douglas "opened up an account with an inspired title (Advanced Concepts) and internally called it the BITBR project...with this background we started a project to try to approach developing a gravity control device, principle or evidence."

* Joseph M Brown - who looked at the theoretical work - faster than light travel.

* Chan Thomas - "tremendous innovative mind. He was a total 'out of the box' thinker and a psychic.

* Paul Wilson - a retired detective to interview witnesses and assemble equipment for a company van to perform field work to observe and record UFOs - with no success.

*Stanton Friedman - to search the UFO literature looking for clues - which technologies to pursue. (June 1969-June 1970.) 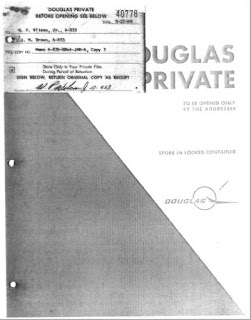 1. Can the speed of light be affected by a large magnetic field? Null results.

2. Any change in forces by spinning bar magnets in a number of different orientations with respect to gravity. Null results.

"The only contact with the Government about the project came towards the end in the spring of 1970, when there was interest expressed by one of the intelligence agencies. This resulted in a draft proposal to "mimic, imitate, or duplicate the observables associated with UFOs." We called this potential opportunity Project Skylite, and prepared a good deal of technical information in anticipation of contract work. It never materialised with McDonnell Douglas to my knowledge."

The project in total spent about US $500,000 over four years. Click here for a short YouTube of Wood discussing the project. To read the documents which came out of  the Project, click here.

"...Yesterday I received a phone call from a fellow who works with McDonnell-Douglas Astronautics. He told me that, "on a private basis," he was compiling a new close encounter database. I am not stupid enough to believe his company has no corporate interest in the matter. They have an on-going secret project, well-funded, with the blessing and official monitoring of the CIA and they're discreetly connected with major UFO groups, all of which love the secret intrigue of a link to the spooks..."

McDonnell-Douglas is continuing the quiet but well-funded study with John Scheussler, also monitored by the agency. They seem to be looking for exotic alloys."

Samples of materials found on the site of the alleged Aurora "crash" were sent "to John F Scheussler, Deputy Director of MUFON and Consultant in Aeronautics,on June 15. They have been submitted to laboratories of McDonnell Douglas in St Lois for their expert aanalysis."

I found no references to a publicly known Lockheed (Martin) UAP research study. However, in Vallee's "Forbidden Science: Volume 3" there is a diary entry for Tuesday 29 August 1989 which refers to a Lockheed employee, Ron Blackburn.

"Blackburn's ambitions in UFO research are very classic: He wants to compute mass and acceleration for physical UFOs, knowing the observed weight on the ground traces - the usual solid, engineering approach. It's a good plan, but would he bother with such hypothetical stuff if Lockheed held the real thing in a lab somewhere?"

On an Internet site  there is a statement that "Dr Ron Blackburn was a Lt. Colonel in the U.S. Air Force, and he has investigated UFOs for the Air Force and Military contractors." On another site  it is revealed that Dr Blackburn was a participant in the mid 1980's Advanced Theoretical Physics Project run by John B Alexander. This participation was confirmed in Alexander's 2011 book, "UFOs:Myths, Conspiracies & Realities."

There are numerous references to Ben Robert Rich, who joined the Lockheed Martin's, Advanced Development Project, and his reported statements about UFOs. But despite this, I couldn't locate details of any alleged UAP studies.

In addition, a former Lockwood Martin engineer, Boyd Bushman is said to have made a deathbed confession in 2014, about his knowledge of aliens and UFOs at area 51. Again, though no evidence of an actual study program.

BAASS received a several year contract from the US Defense Intelligence Agency under solicitation HHM402-08-R-0211 in September 2008 said to have been for at least US$M10. Details may be read in a series of blog posts at http://ufos-scientificresearch.blogspot.com

Aerospace company Lockheed-Martin was reported to have also been a bidder for the contract, according to Las Vegas journalist George Knapp in 2018. [However, see correction below in "Update: 18 February 2019.]

In the United Kingdom, British Aerospace Systems is a large aerospace company. Between the late 1980's and around 2005, it ran a small office, named Project Greenglow. It was staffed by British engineer, Ronald Evans, who was looking to see if somehow it was possible to control gravity, thus resulting in a new era for aircraft propulsion. No real results came from the Project.

Las Vegas journalist George Knapp issued a tweet, on Twitter, on 18 February 2019, to clarify the issue of who put in a bid for the DIA AAWSAP contract. The tweet read:

"I am told by two persons that Lockheed expressed interest in the contract but did not submit a bid. The general feeling was that it was too much work for too little money for Lockheed to take it on."
By Keith Basterfield at January 08, 2019