A "lapse in security"

On 7 August 2018, a story broke*, that there had been a "lapse in security" on a certain US website maintained by a team member of the To The Stars Academy (TTSA). This "lapse" meant that a number of  images of documents relating to the Advanced Aerospace Threat and Identification Program (AATIP) were publicly available for a period of time. These documents included an interview with one of the pilots (not Dave Fravor) involved in the 14 November 2004 USS Nimitz encounter; and a series of "briefing slides," concerning the AATIP.

How do we know these were genuine documents? Firstly, the website they were on, was verified as belonging to a TTSA team member. Secondly, the pilot's interview had already appeared on the TTSA's own website; minus the identifying names, phone numbers, emails etc of the crew members of the three aircraft involved, which were shown in  the "lapse" documents. Thirdly, the "security lapse" was rapidly fixed and the documents were removed from that website.

The purpose of this blog post is to take another look at the "briefing slides" and their contents; and provide images of them for others to debate and discuss.

There were seven jpeg files, each labelled as "aatip-brief-pdf-original," numbered 1-4 then 6-8. Missing is a jpeg file number page 5. When opened the slides are numbered 1-4, then 7-9. Slides numbered 5 and 6 are missing. The contents of the slides are as follows: 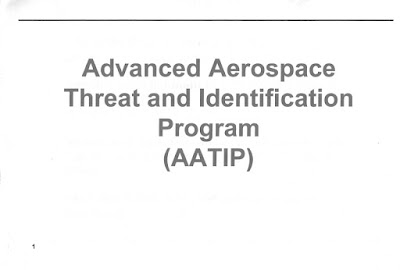 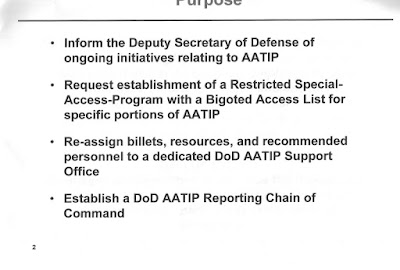 Slide 2 above - Purpose of the briefing. Notice that the second dot point is:

This is the exact same request as set out in a letter dated 24 June 200-9, authored by then Senator Harry Reid and sent to the Honourable William Lynn III, Deputy Secretary of Defense. The subject of the letter is the AATIP.  This puts the briefing slides as dated post 24 June 2009. You can read the full text of this Reid letter, here. 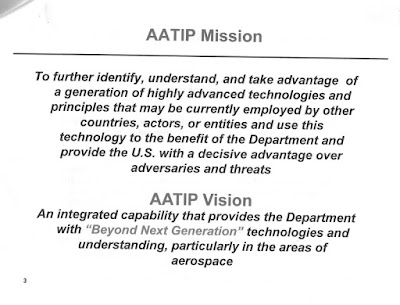 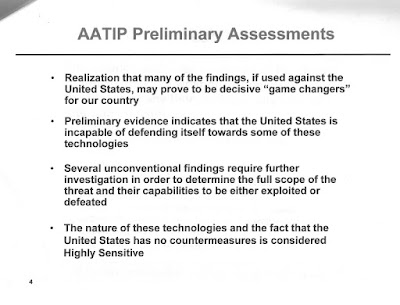 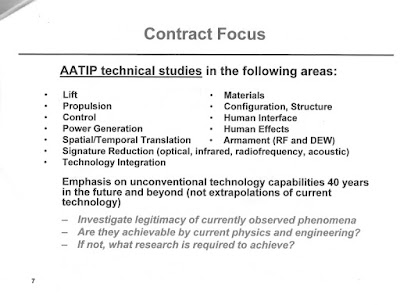 Slide 7 above - "Contract focus." Note that the 12 dot points, i.e. "lift" etc are the same items listed in "Statement of objectives for the Advanced Aerospace Weapon System Applications Program (AAWSAP). This statement is "Attachment A" to the August 2008 Defense Intelligence Agency solicitation for work on the AAWSAP, solicitation number HHM402-08-R-0211, issued by the DIA in August 2008.

Note also the use of the words "currently observed phenomena" not "advanced aircraft." 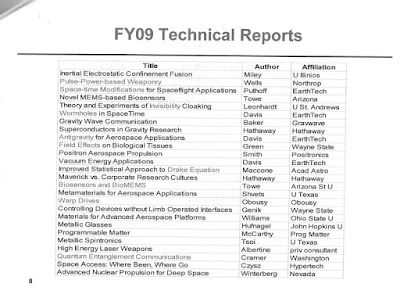 Slide 8 above - "FY09 Technical Reports." The technical reports shown in this slide, are some of the 38 Defense Intelligence Reference Documents (DIRDS) which have been discussed last year, and recently, in a number of Internet articles, and also on this blog. 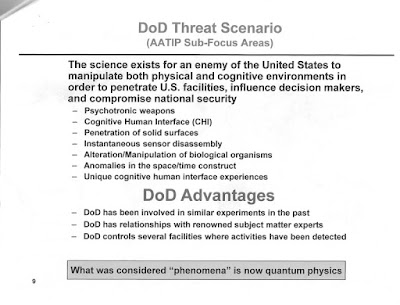 Slide 9 above - "DoD Threat Scenarios - AATIP Sub-Focus Areas." If, as some commentators have suggested, that the AATIP/AAWSAP was simply focusing on the possibility of advanced aircraft from Russia and China, then what do we make of words:

"Psychotronic weapons"; "Penetration of solid surfaces"; and "Anomalies in the Space/time construct."

These are clearly not related to advanced aircraft from other countries.


In summary
These genuine "briefing slides" for the AATIP/AAWSAP, indicate to me, that the "phenomena" being studied, was not simply Russian or Chinese advanced aircraft, but something else.

* The images were first revealed on Twitter.
By Keith Basterfield at January 20, 2019