Recently, I posted the account of one Neil McIntyre, who related a very close encounter, in mid 1947, which happened in Shepparton, Victoria. In that post I asked any blog readers who may be aware of other Australian 1947 sightings, to let me know details of them.Yesterday, I heard back from a Sydney research associate, who told me that Sydney researcher, Bill Chalker, had collected other 1947 sightings. Here are my summaries of Bill's details.

At 0200hrs at the Greta Army camp, near Maitland, New South Wales, an individual saw a light in the sky, approaching from the west. As it drew closer he saw it was a silver dome shaped disc, with blue flames underneath. It flew in a zigzag pattern, leaving behind a faint yellow or golden trail. It flew above an overhead cloud bank, and he saw the glow from flame in the cloud. The cloud suddenly lit up; the light then faded. There was no associated sound. {Source: Letter from witness to UFOIC dated 26 August 1971.]

A RAAF Flt. Sergeant Leslie W Bastin and daughter Jean, at home in Lawson, New South Wales; saw a pewter type metal structure hovering over a gully. It had a domed top; with a flange around the centre. Lights were visible above the flange area. It stayed for 30 minutes, then left silently, and quickly. [Source: Letter to Bill Chalker from Jean Bastin dated 11 February 1983.]

A 40 year old woman was on Bondi Beach, Sydney, New South Wales, at about 2100hrs. She heard a humming sound above her, and saw 'The Air ship.' It was a cigar shape, and a very pale blue colour. It was there a few minutes, and then disappeared in the dark sky. [Source: Letter from Mrs. A N.... to UFOIC dated 10 September 1978.]

Mr W Quinlan of Grafton, and his wife and son, were on the river, about 1430hrs, when looking at an aircraft saw some shiny discs in the sky. He described them as transparent and disc like in shape. 'They appeared to be caught in the eddy of the wind.' [Sources: The Daily Examiner (Grafton, NSW) dated Thursday 10 July 1947 p3. and Tweed Daily (Murwillumbah, NSW) dated Saturday 12 July 1947 p.2.] 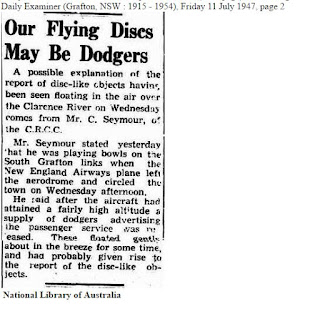 The next day, The Daily Examiner (p2.) featured a follow up account which stated that an aircraft had been dropping leaflets in that area at that time.