I have just obtained a copy of a previously unseen RAAF file from the National Archives of Australia. File series J229, control symbol 5/13/Air, barcode 21290309 has a date range of 1956-1966, and is titled 'Sighting of unidentified objects.' It originated from 10 (MR) Squadron RAAF, based at Townsville, Queensland, Australia. It is 130 pages in digital format. 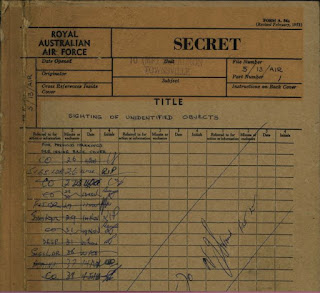 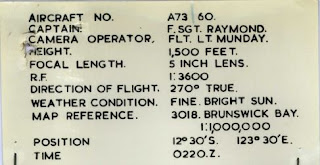 A memo from the Squadron photographic officer to the commanding officer, 10 Squadron, dated 29 May 1958, states in part:


'After normal processing film was numbered and assessed  for printing during which time object was discovered.'


His report and photographs were forwarded to Head quarters Home Command on 3 Jun 1958. HQ asked for a further surveillance run and low level visual inspection of Cartier Island, during the next regular surveillance overflight.

This second flight was carried out on 3 August 1958. Part of the resultant report read 'A visual survey of Cartier Island was carried out at low level. Nothing could be seen in the area off the western end of the reef in the vicinity of the reported unidentified object.'

The object, remained unidentified.
By Keith Basterfield at January 20, 2017