Readers will have noticed that I have been busy going through digitised issues of the Flying Saucer Review; NICAP's the UFO Investigator; the MUFON Journal, and the APRO Bulletin, in order to document Australian material in these overseas periodicals. Having Excel spreadsheet indexes of this material, makes it so much easier, when I am answering email from people, asking me about Australian sightings.

My latest small project was examining online resources, which contain files relating to the former USAF Project Blue Book, and checking these for Australian material. In all, I found 20 Australian sightings in these Blue Book files. 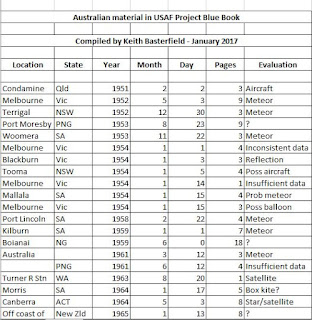 The best reference source I found, was Fold3. However, simply typing in such keywords as 'Australia;' Tasmania (as many Americans refer to Tasmania as if it were a separate country to Australia, whereas it is one Australian state); New Guinea etc., may not have revealed the full extent of Australian material. There may be additional sightings listed in other ways. I also found that you need to look at each page listed, as, for example, there were three reports for Melbourne, Victoria, dated 1 January, 14 January and 15 January 1954, all contained in the file dated 1 January 1954, Melbourne.  In addition, I found pages about non Australian sightings, attached as part of an Australian sighting file.

All in all, I found a total of 104 pages for the 20 sightings. Many of these sightings had Project Blue Book evaluations, e.g. Condamine, Queensland, dated 2 February 1951 was said to be a meteor; while the 20 August 1963 Turner River Station, Western Australia was listed as a satellite observation.

One example will illustrate the path these sightings took. On 12 June 1961 there was an observation by two residents of the Azerita Plantation, Papua New Guinea, at 0400hrs local time. Over a fifteen minute period the observers saw a shiny object which approached from the North East. It was shaped like the hollow in a New Moon, and could have been delta winged. Its estimated height was 15,000 feet. It kept moving back and forth, to and from the North East. Eventually, it returned back the way it had come and was lost to view.

The Blue Book case index card stated that the cause of the sighting was 'Probably atmospheric refraction in pre-dawn hours of planet or star.' Ultimately, though it was listed as 'insufficient information.'

If you'd like to read more about the early interaction between the RAAF and USAF as regards UAP reports then click here and here.