My examination of the newly available National Archives of Australia (NAA) file series A4090, control symbol 529/1/16 Part 1, titled 'DSTO records of Unidentified Aerial Phenomena,'  combined with the earlier comprehensive work of Sydney based researcher Bill Chalker, has now given us a detailed look into the intelligence and scientific interest about UAP, within the Australian Department of Defence, in the period 1968 to 1981.

I now see three phases of this interest:

These two phases were described by Bill Chalker in his review chapter ('The Australian Military and the Official Government Response') in the book 'UFOs and Government: A Historical Inquiry' (2012. Swords, Powell et al. Anomalist Books. San Antonio, Texas.)  Both phases were directly initiated by Australian physicist Harry Turner.

A third phase is revealed in public documents now available on NAA file series A4090, control symbol 529/1/16 Part 1, which were not detailed in 'UFOs and Government.'

'You asked for an outline of the principles and procedures which govern UFO sightings in Australia.

2. This note outlines briefly JIO understanding of policy and procedures for the investigation of unusual aerial sightings (i.e. UFO reports) in Australia.

3. In the early 1950's, at a time of Public U.S. concern about UFOs, the U S Air Attaché in Australia asked for copies of any Australian UFO sighting reports, but this concern was not sustained.

4. Later, in 1954, parliamentary queries about the defence significance of such sightings led to the Department of Air setting up a formal system of investigation managed within RAAF.

6. By the time the RAAF set up its systems in 1954, the Americans had concluded that there were no grounds for associating unexplained sightings with foreign military - i.e. Soviet activity. We have evidence of continued US scientific interest in unexplained phenomena - much of it classified - but after the direct military interest was judged to be minimal the USAF public attitude became one largely of minimising the importance of unidentified aerial sightings. This also became the general view held in RAAF.

7. In 1971 the matter was examined by DSTO and by JIO Scientific and Technical Intelligence, and some thought was given to transferring the responsibility for examination  of reports from the Department of Air to scientists in the Department of Defence. The transfer did not eventuate, however the then D JIO did not see the investigation of Australian phenomena a JIO responsibility. (Nor do I quite frankly.) However, informal liaison and assistance continues to be provided by JIO when sought by RAAF.

8. Present RAAF practice is to designate an officer at each RAAF base as responsible for the investigation of reports of unidentified aerial sightings which are brought to RAAF attention. The task is additional to the officer's normal duties and can only be described as a marginal responsibility. As a rule the RAAF does not itself take the initiative to pursue sightings, e.g. press reports.

9. The difficulties which RAAF faces in dealing with reports can be readily imagined; many are vague and unsubstantiated, and from witnesses of widely varying reliability. Given the limited military interest, and the other pressures on the investigating officers, there is, as we understand it, no attempt at exhaustive examination, beyond eliminating likelihood of a practical military or aviation interest.

10. Where possible or judged important, the RAAF investigating officer visits the observer at the site of the sighting to complete Part I of the attached Unusual Aerial Sightings report. On returning to the RAAF station the investigating officer completes Part II of the Report and finally makes an evaluation of the possible cause of the sighting in Part 3. This evaluation is conveyed to the observer, and the completed Unusual Aerial Sightings Report is forwarded, to the Directorate of Air Force Intelligence and Security (DAFIS.) DAFIS maintains a chronological file of all Unusual Aerial Sightings Reports but they do not initiate any follow up action unless requested by another division within the Department.

11. The Missiles, Space and Electronics Section in the Defence Scientific and Technical Intelligence Branch JIO maintain a link with DAFIS, and often, we are able to isolate and identify space objects re-entering the earth's atmosphere over Australia. The RAAF's routine procedures for investigating Unusual Aerial Sightings were extremely valuable in the field investigations associated with the Chinese satellite launch failure and subsequent re-entry in July 1979.

12. The press cutting from "People" dated 10 December 1980 was he work of freelance journalist John Pinkney, founder of Australia's UFO Research Society. He also has a column or so in such journals as "Australasian Post" and the recently introduced "Omega." You may recall that "Omega" carried a Brian Toohey article entitled "Nuclear Terror: Australia's Secret Role" featuring a double page coloured photograph of Pine Gap. John Pinkney's thesis, developed along with other "crackpot" theories in his book "Alien Honeycomb" (Pan Paperback, $3.90) published in June 1980, is the existence of a conspiracy between the Australian and American governments (RAAF/Defence - Pentagon etc) for a mass cover-up of Unidentified Flying Objects.

13. I hope that the above meets your requirements.' 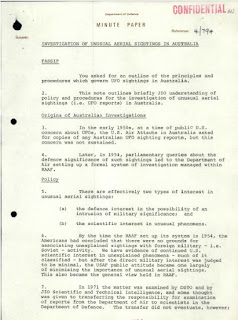 'I asked DJIO recently to give me an outline of the principles and procedures governing the Defence interest in and response to UFO sightings in Australia. I had in mind initiating this enquiry that in all likelihood there would be no response to such sightings - other than by crackpots - unless conducted or at least initiated by this Department.

2. DJIO has responded and I attach a copy of that response dated 12 January 1981.

3. I have to conclude on the limited advice contained in DJIO's minute that the responsibility for examining UFO reports is in fact nowhere near clear in the sense that RAAF do not hold it to be important or binding upon them or upon the officers to whom they delegate.

4. I don't think that the matter falls within the normal spread of SIP responsibilities. It does occur to me, however, that it cannot be entirely without interest to DSTO.

5. May I invite you to read DJIO's minute to me and make your own decision on whether you feel that: 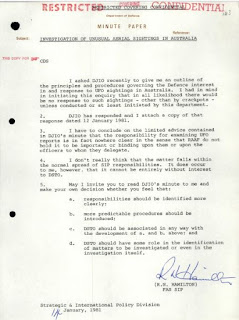 (Source of the above is folio 143. No internal file reference cited.)

'Thank you for the reference, which raise a matter which has been discussed with DSTO from time to time. Two previous Chief Defence Scientists took an interest in the physical bases of the reported phenomena ( Mr H A Wills and Dr J L Farrands) and DSTO was involved with JIO in the design of the form attached to your minute.

2. In culling the forms held by RAAF, there remains a small core of reports which are competently reported, and cannot be readily ascribed to astronomical objects, artificial satellite re-entry or meteorological/optical phenomena.

3. The most interesting of these are those which leave physical evidence, which most frequently consists of burnt or flattened vegetation. In more affluent days, DSTO had proposed one or two 'flying squads' equipped with magnetometers, radiation counters etc. to try and capture some hard-core evidence.

On this minute there is a handwritten note which reads:

'Original held by Ross Thomas. FASSIP commented - What I have established is record of 'studied neglect.' "What the hell do I do?!" Subsequently discussed with Paul Dibb and matter finally left with Ross T. to raise sometime with Military Space Cttee.' (illegible initials) 3/6/81.' 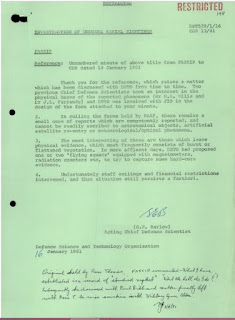 1. None of this 1981 material mentions Harry Turner, whose work lay behind phases 1 and 2. When the Disclosure Australia Project interviewed Turner, he advised the Project, that he left JIO in 1984, hence he was still in the area in 1981.

2. It remains unclear to me, why R N Hamilton, FASSIP, DOD, asked for a report on the subject.

3. Named players in all this were:

When the Disclosure Australia Project interviewed Harry Turner in 2004, Turner advised that George Barlow, of Defence Science and Technology was one of the individuals involved in development of the proposed rapid investigation team. (Source: Newsletter 16 of the Project, dated September 2004.)
'George Barlow was the number two man in Defence Science. He had an intellectual interest in the subject of UFOs and had read on the subject. He thought there was something to it which needed to be investigated.'

On page 397 of 'UFOs and Government,' Bill Chalker notes (in respect to the rapid investigation team concept) 'George Barlow of Defence Science and Technology (DST) had also offered the help of his group.' Barlow passed away in 2005.

Was Director Joint Intelligence Bureau between 1968 and 1969, and Director, JIO between 1978 and 1982. I found very little other information on the Internet about him.

Internet research indicates that the Paul Dibb mentioned is Emeritus Professor Paul Dibb, AM. He was previously Deputy Secretary of the Department of Defence (1989); Director of the Defence Intelligence Organisation, and head of the National Assessments Staff. Also Director JIO between November 1986 and December 1988.

I located Paul Dibb, still alive, at the Australian National University in Canberra. I sent him an email, together with a copy of folio 144 which mentioned his name. I enquired as to his recollections of the UAP events of that era in 1981. His response email was short, and read 'I am now almost 78 years old and I have no recollection at all of the issues you raise.'

An Internet search found some words by him on a school site. In it Thomas writes that he worked in the JIO and later Strategic and International Policy of the Department of Defence. He left Defence in early 2000, and was at the time of writing, in semi-retirement in Brisbane. I am attempting to locate if he is still alive with the purpose of interviewing him about UAP matters.

Was First Assistant Secretary, Strategic & International Policy Division, DOD, in 1981. I have found little information during an Internet search. I am unaware if he is still alive.

Although there are a couple of previously unknown internal file references provided by documents on this file, i.e.

a viewing of the NAA's RecordSearch database, found not trace of any relevant files associated with these numbers. However, a reasonable deduction is that somewhere there is a file (or series of files) used by the Chief Defence Scientist with  copies of correspondence relevant to UAP. In addition, it is possible also, that further files may have been held by the current DIO (renamed from JIO). Whether such files exist today, is not known. ﻿

Now we have internal documents, from both the Intelligence and Science areas of the Department of Defence, which relate to UAP. One question remains, and that is, are there further Australian government UAP documents in existence which we have not previously seen?

Bill Chalker has just published a blog post which reveals that the answer to this is yes. He has held these documents for many years, and has just released images of them.
By Keith Basterfield at July 03, 2017