This post continues my report on the contents of a newly available Australian government UAP file. I am providing a folio by folio description, plus comments to place the documentation into context.

Copies of the Department of Air's annual summaries of explanations for UAS, between 1960 and 1971.

1. This is a reply from DAFI/DOA re the DOS idea.
2. SAIRSS is R Cartwright, DOA.


Inquries in the United Kingdom

Is a letter dated 27 January 1972 to Commodore J W McClure, RAN, DST representative in London, from S T M Johnstone, Attached are folios 107 and 108. It asks about the alleged statements attributed to Dr Fred Hoyle.

Appears to be a sample UK government letter to a witness of a sighting.

Appears to be a sample of a UK government letter to someone who asks about UFOs.

Appears to be a blank UF UFO report form. 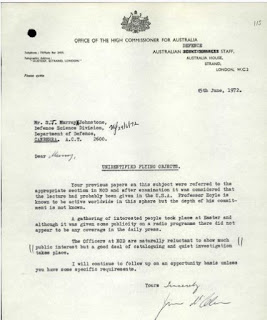 Is a response to folio 109, dated 15 June 1972. It includes the following text. 'The officers at MOD are naturally reluctant to show much public interest but a good deal of cataloguing and quiet investigation takes place.'

Articles from the UFO Subcommittee of the US AIAA organisation.

A two page memo from Commodore J W McClure in London, to S T M Johnstone, dated 16 November 1972. It describes the UK government's UFO process, and this explains why folios 110 to 114 are on this file.

A three page article from the magazine 'New Scientist' dated 17 May 1973 titled 'The man who spoke out on UFOs.' It is an article about Professor J Allen Hynek.

In August 1973 Hynek was in Australia and together with Dr M Duggin and Harry Turner, met with DAFI on 24 August 1973. Was someone gathering background material on Hynek prior to his visit here?

A two page letter from J Allen Hynek, to the Editors of 'Physics Today' dated 15 February 1971.

A two page letter from the Minister assisting the Minister for Defence to a 'Richard' who had asked the DOD for information on UFOs.

Various newspaper clippings about the subject.


Moving into 1981 - UAS and a Chinese satellite

A confidential minute dated 12 June 1981 from A W McMichael, Director of JIO, to FASSIP, DOD. The FASSIP asked for '...an outline of the principles and procedures which govern UFO sightings in Australia.'

Interestingly as part of the minute, JIO stated 'The Missiles, Space and Electronics Section in the Defence Science and Technical Branch JIO maintain a liaison with DAFIS...The RAAF's routine procedures for investigating Unusual Aerial Sightings were extremely valuable in the field investigations associated with the Chinese satellite launch failure and subsequent re-entry in July 1979.'