On 26 May 1981, G A Perske, Group Captain, Directorate of Air Force Intelligence and Security (DAFIS), Department of Defence, wrote a memo to the Directorate of Chief of Air Staff. The title of the memo was 'Investigation of Unusual Aerial Sightings (UAS).'

Paragraph 6 is of interest to me, as it reads:

'6. The only advantage I see in retaining UAS investigation responsibilities are:

a. it allows a security oversight of unusual events which, on the odd occasion, may have some military implication;

b. it provides 'cover' if we wish to investigate some incident, not necessarily related , in more detail; and

c. it provides some minor PR advantages (questionable) to the RAAF.'

I always wondered what paragraph 6b meant. Now I think I know. 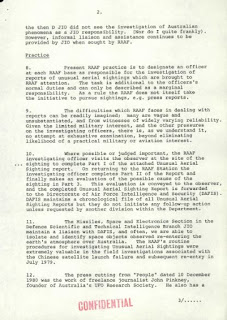 Paragraph 11 of this minute reads:

'The Missiles, Space and Electronic Section of the Defence Scientific and Technical Intelligence Branch JIO, maintain a link with DAFIS, and often, we are able to isolate and identify space objects re-entering the earth's atmosphere over Australia. The RAAF's routine procedures for investigating Unusual Aerial Sightings were extremely valuable in the field investigations associated with the Chinese satellite launch failure and subsequent re-entry in July 1979.'

Here then, we have evidence that JIO conducted field investigations of fallen satellites/rockets, and the implied reason was the possible retrieval, and examination, of such material for intelligence value, similar to the USAF 'Moondust' retrieval system.

If the JIO used UAS observations in July 1979, searching for clues as to where the re-entering debris may have landed (debris from the US Skylab fell, and was retrieved, in Western Australia also, in July 1979) are there any other mentions of similar things in the UAP literature?

On page 400 of the book,'UFOs and Government,' Bill Chalker wrote:

'The JIO maintained a secret 'BOLIDE' file which seemed to be anchored to the premise that UFOs could involve the chance of retrieval of secret hardware and therefore contribute some useful intelligence.

It appeared JIO had a rapid intervention capability, as they were able to institute prompt widespread ground searches in suspected hardware crashes. They did this through special access channels. A specific example occurred in October 1979, when reports of a fireball over the Esperance area of Western Australia had JIO's DSTI Branch investigate "through special access channels a search over a 1,500 nautical miles radius of Esperance and covering the time frame of the reported sightings, but with zero results."'

Unfortunately, we no longer have access to the RAAF's UAS sightings files for 1979. In 2004, an FOI Officer for the Department of Defence advised me that the Department had destroyed (consistent with  Archive regulations) file series AF 529/1/3 and AF 84/3265 part 1. These covered the years 1974 to 1982. Therefore, I have been unable to check UAS sightings for the months of July and October 1979 to see what reports may have been made.

I forwarded a query to Ted Molczan, an amateur expert on satellite re-entries, who lives in Canada, and asked him if he had any information concerning a Chinese launch failure in July 1979. Ted responded:

Jonathan McDowell's launch log reports the launch time as 1979 July 27 21:28 UTC, but over the years he has seen dates of July 27, 28 and 30, and he is not confident that we know the correct date. I am not certain that we can trust the launch time either, because it happens to be the nearly identical to that of the replacement launch on 1981 Sep 19. It's not clear that there was an operational requirement to launch at that time, so the coincidence seems unlikely, leading me to question whether someone mistakenly assigned the time of the replacement launch to the failed launch.

Despite the uncertain date and time, it is plausible for the vehicle to have descended over Australia. The launch was from Jiuquan, near 40.9581 N, 100.2912 E. The intended orbit is unknown; however, it is reasonable assume that it was similar to that of the replacement launch: 59.5 deg, 233 X 1595 km. The launch azimuth would have been approximately 140 deg, which would have passed over the Gulf of Carpentaria, headed toward Queensland and New South Wales, on a track parallel to the NE coast of Australia, roughly 1,000 kilometres in-land.

If any details of the Australian UFO sighting(s) are found, I would be pleased to attempt to verify the correlation with the failed launch.'

Another piece in the puzzle

This information, especially the track over Queensland, may link in to another piece of the puzzle.

Part of his work provided an extract from an Australian government document, which in part read: 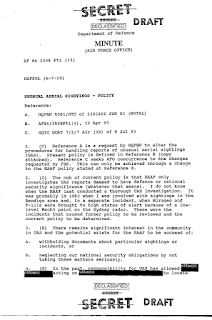 '4 (S) In the past, responsibility for UAS has allowed (redacted words) acting on (redacted words) to locate pieces of space junk of high intelligence interest. The most recent example known to me occurred in the late 1970's/early 80's when a RAAF SQLDR was despatched at short notice to central Queensland on the lookout for pieces of (redacted words) that failed to achieve its correct trajectory. This work may become relatively more important in future if regional nations move to develop and acquire medium and long range SSMs.'

It seems reasonable to conclude that this Queensland recovery attempt, was in fact of the July 1979 failed Chinese launch.

If we acknowledge that there was a search for a failed Chinese launch in Queensland in July 1979, what of Bill Chalker's information about something re-entering over Esperance in October 1979?

I took a look at Ted Molczan's list of 'Visually observed Natural Re-entries of Earth Satellites.'
to see if I could locate any information on an October 1979 event. There was only one listed:

This re-entry however, was not over Australia, but over Canada. So this doesn't match Esperance, Western Australia. Checking further I did find that the very next entry indicated a re-entry over Esperance. The date was 11 June 1980 at 1157UTC, when SSN11828, Russia, Cosmos 1185r, type R, model 15510 was seen over both Esperance and Kalgoorlie, Western Australia. (Source: NAA Bureau of Meteorology file PP956/1/45/38, pp10-13; 40-45.) Could Bill's date be incorrect?

Have we located any JIO files which could be the JIO 'BOLIDE' file?

Researcher Paul Dean came up with one ingenious idea to find such a file. After I located a JIB/JIO NAA file JIO63, control symbol 3092/2 titled 'Scientific Intelligence - General - Unidentified Flying Objects,' date range 1957-1971, Paul approached the Department of Defence and asked them for a listing of files held by the JIO, which had a file number similar to 3092/2. His reasoning was that if they opened a file on UFOs, maybe they opened a file on satellite re-entry retrievals.

After a while, the JIO responded to Paul's query and provided a list of such files. Interestingly, JIO file 3092/3 was titled 'Space Rockets and Earth Satellites' with a date range of 1958-1971. Paul immediately asked that this file be examined and made available to him. That was two years ago, and he is still waiting.

Meanwhile, a search of the NAA revealed another possibility. NAA file series A9737, control symbol 1990/1755 Part 1 is titled 'Outer Space Uncontrolled Re Entry of  Satellites and Other Space vehicles' but originates not with the JIO but with the Department of Foreign Affairs. It contains information about the known re-entry of Cosmos 1402. So, this file was of no real assistance.

So, to date, we can say that no civilian researcher has located the JIO Bolide file.


Did researchers get it wrong?

After reading about the JIO interest in the retrieval of downed satellites, I wondered if UAP researchers had got it wrong about certain UAP cases? Perhaps some JIO retrievals have been written off by UAP researchers as UAP?

Could these have been 'cover' stories about a JIO re-entry retrieval?
By Keith Basterfield at July 05, 2017