One of the reports on the recently obtained Western Australia Police Department file (click here) occurred in October 1974, and caught the eye of Ted Molczan, an amateur astronomer. Ted is particularly interested in artificial satellites, and the observations of satellite re-entries. 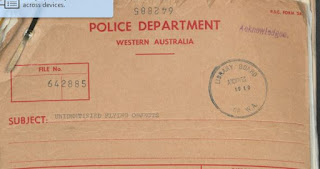 As mentioned above, Ted was specifically interested in the October 1974 sighting, dated 14 Oct 1974 on the file which was "...exactly 24 hours earlier than a re-entry I previously identified that had been reported as a UFO from Fitzroy Crossing, WA and Katherine, NT. The object was the Agena D upper stage (1966-110B/2609)from the launch of ATS1..."

I forwarded Ted a copy of the Police Department file in order that he could read the original documents. He later replied that he found evidence on the file that the 14 October date was incorrect and that the UFO sightings probably happened on 15 October. Ted ended his thorough analysis with "Despite the noted imperfections, the overall agreement with the known re-entry trajectory and the appearance of a re-entry fireball is strong." 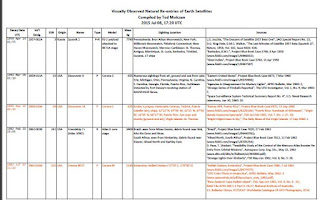 Ted kindly sent me the latest version  (27 pages) of his "Visually observed Natural Re-entries of Earth Satellites" table. The table contains numerous examples of UAP reports caused by satellite re-entries over Australia. I am currently cross checking this table against my catalogues of Australian UAP.

I asked Ted whether or not the following sightings might be of a re-entry?

19 July 2006 Wirrabara Forest to Quorn and Hawker SA 1330hrs DO/IFO?
“So was it a meteorite or space junk falling to earth? No one knows. But at 1.30pm in the afternoon of July 19, many people across the Mid North of South Australia - from to Quorn and Hawker saw a large object moving across the sky. One witness, John Teague was at Hawker in the . He was pumping tyres when something caught his eye. "I thought it was a flare. It was the colour of mercury and had a tail and there were sparks coming from it. Then it seemed to break up and disintegrate." He said it was large, not as large as a full moon, "more like a cricket ball," he said. About four minutes after it disappeared, John heard a "sonic boom". He said, "It was really loud, like thunder". The seismographs at Hawker and Wilpena registered the boom as a disturbance. David Love, seismologist with the Department of Primary Industries and Resources in confirmed that equipment "at Hawker and Wilpena recorded the same thing". "What we've recorded is a soundwave coming somewhere south of Hawker, whether its south west or south east is a bit hard to tell." He said they haven't got enough case studies to compare this sound with a sonic boom from a jet. And this is complicated further because the disturbance detection instruments are in the ground. So will property owners in the area during the weeks and months ahead find space junk or meteorite fragments? From what the seismographs indicated, David Love concluded, "If anything did hit the ground, it wasn't large". So what was it? The United States Space Command in said "there was no scheduled re-entry of any spacecraft or satellite." The CSIRO, the Civil Aviation Authority and the Australian Air Force at the Keswick Barracks, all said they knew nothing about it. The Astronomical Society in is keen to hear from any witnesses so they can determine what it may have been.” (Source: Annette Marner http://www.abc.net.au/sa/stories/s1692314.htm?backyard.) Ted's response was as follows:

"Probably not a re-entry. None were expected at the time and I have yet to find a confirmed credible daylight sighting of a re-entry. Typical objects reach about mag -8 at 100km which might be detectable to the naked eye if the observer knew where to look, but not by chance sighting. A huge object like one of the space stations, would be visible."