In a recent post (click here) about "Unidentified Flying Objects and mysterious happenings in Papua New Guinea," I mentioned that a number of papers on National Archives of Australia (NAA) file series A452 control symbol 1969/4393, were missing according to a count of the folio numbers. These papers amounted to almost 20% of the file I received from the NAA. 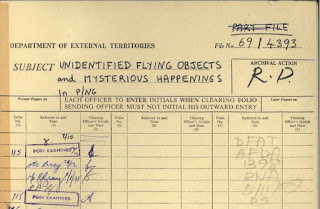 On the track of the missing papers:

I submitted a request to the NAA asking "How I may submit a request to access the "classified" part of file series A452 control symbol 1969/4393?"

On 14 July 2015, William Edwards of the NAA advised me that "The file as it exists in our collection, has been fully opened. No material  on the file has been withheld, so what you see in the digitised copy is the full extent of the material it contains.

"Page two of the digitised copy includes a hand written note stating "confidential part file cancelled 15/2/71." I assume this means that part of the file was destroyed in 1971 while it was in the custody of the controlling agency, the Department of External Territories.

"I will consult the Department's file registration and movement cards for the period to see if I can find any more information about this cancellation of confidential material."

On 15 July 2015 William Edwards advised "I have checked the file movement cards from series A1250 that refers to file 1969/4393. It doesn't really tell us much, but I have attached a scan of the card to this message." 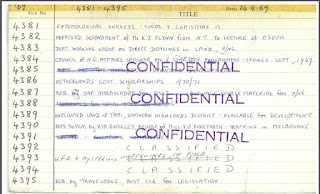 So what happened to the missing pages on 4393?

In short, we do not know. One can speculate that they were correspondence with the USAF, the UK government, or were Australian Security Intelligence Organisation documents, but we will never know.
By Keith Basterfield at July 17, 2015