The 12 June 2015 digital issue of the "Toowoomba Chronicle" newspaper carried an article by Meghan Harris. It read:

"FieldEquip employee Greg Young decided to capture the beauty of the sunrise by taking a photo and it wasn't until he zoomed in on his iPhone that he noticed the strange object.

"Mr Young said he looked back up at the sky and noticed the triangular object flying through the clouds followed by a dark blue trail.

"It was all a bit weird because a few moments earlier me and my co-worker saw some bright flashing lights from the East and we couldn't work out what they were," Mr Young said.

"Then we saw this thing and it just made for a really odd morning. I didm';t believe in aliens or anything like that but it definitely looked like something" he said.

"FieldEquip operations manager Darren Mauger said he did not believe in aliens but he was intrigued by the object. 'I completely disbelieve in aliens and UFOs but I did find it strange," Mr Mauger said. 'Greg came in to show me the photo and by the time I went back outside it was gone.' He said 'it wasn't travelling very fast and was flying silently but it had disappeared within a minute,' he said "

As I could not contact Greg Young to obtain his permission to reproduce his photograph, the best I can do, so blog readers can view the picture, is provide a link to the newspaper article and photograph here:

I would ask that you view the picture, before reading further.

1. I visited the Toowomba Chronicle digital website and viewed the "comments" section which followed the article. Suggestions as to the cause of the image in then photograph included "...probably a dirty smear on his phone camera lens," and "...it's a cloud formation." A person named J. stated "I've got a photo of it and thought it was a cloud too!"

2. Oakey, Queensland is north-west of Toowoomba. Its latitude is 27.45 degrees south. Its longitude is 151.7 east.

5. I revisited the Toowoomba Chronicle website and submitted a "Letter to the editor" seeking contact with anyone who had information about the photograph.

6. On 12 July 2015, I received an email from the individual named J. She advised that she had two photographs which she herself had taken at about 0625hrs on 12 June 2015 from Oakey, Queensland.

J. duely sent me copies of the photographs and I took the opportunity to ask her the questions below. I have added her responses. 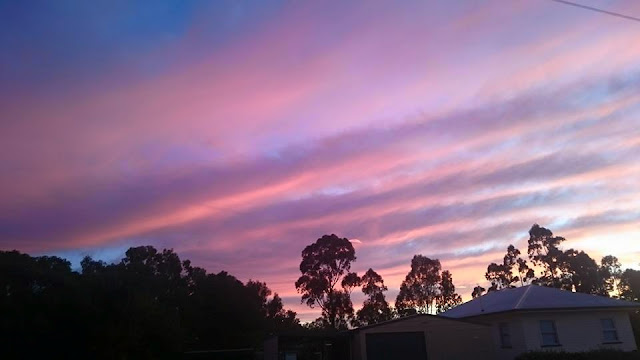 Q1. May I ask the name of the street from which you took the shots?
A1. J. provided this, but I am choosing to keep this confidential.

Q2. Did you notice the object in the sky when you took the 2 photos?
A2. Yes.

Q4. Did you move between taking the pictures?
A4. Taken about a minute apart. Stepped back to take second photo.

Q5. What was the time interval between the photos?
A5. 1 minute.

Q6. How long did the "object" remain in view to you, or did you go indoors/to work and leave it still visible in the sky?
A6. It was there all the time but had dispersed when I saw it on the way to work a couple of minutes later further down the street,

Q7. Was there any sound associated with the "object."
A7. No sound.

Q8. Have you been in contact with Greg Young?
A8. Never met Greg Young. Sorry. 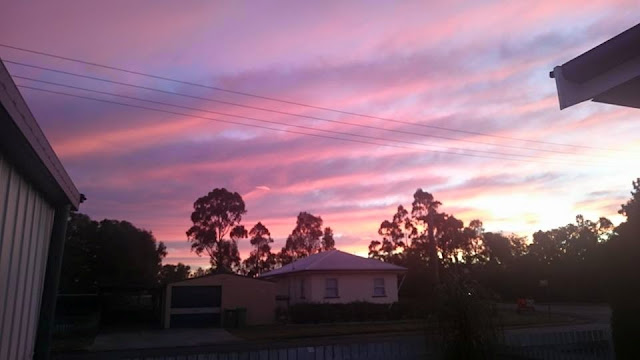 7. I made efforts to contact Greg Young, through his employer FieldEquip; and through the Toowoomba Chronicle. I was unable to do so. He did not respond to the "Letter to the editor," nor to my comment on the digital site. I did not find a Facebook account nor any other social media contact for him.

1. I now believed it to be possible to analyse this report on the data available.

2. I now had the location of both photographers that morning.  J. was to the south-west of Young. Both were looking north-east at the time. J and Young were only about two streets apart. This explained why the  "object" is in the same position in all three photographs relative to the background cloud formations, and patches of blue sky.

3. What about the dark blue trail mentioned by Young? It is not visible in his photograph. However, it is clearly visible in both of J."s photographs. It is to the left of the "object." In the Chronicle article, Young is stated to have said " he noticed the triangular object flying through the clouds followed by a dark blue trail." My impression from this is that the suggestion is, that the trail was behind a flying object.

In J's photographs it extends from the left hand edge of each photograph and ends at the "object."

What is this blue line? The trail behind a flying object? Perhaps not. Another better possibility occurs to me. I noticed that if you extend an imaginary line from the trail, and take this line to the right of the photograph it would cross the exact position of where the Sun was rising, still below the horizon at the time the pictures were taken.

So, what do I propose this blue line is? I think it is the shadow of the "object" which is a cloud, thrown to the left of the cloud by the still to rise Sun. This is, of course, a completely different interpretation to that ascribed to Young.

What is interesting is that although Young is cited as thinking the blue line is a trail caused by the object, he only took one photograph. Why didn't he take several photographs, if the object was moving, which would have shown it in different positions,and hence proved it was moving, we will never know. J. did take two photographs one minute apart and the object is clearly stationary.

1. J's photograph shows that the object was stationary over a minute.
2. J. watched the "object" dispersing, just like a cloud.
3. In J's opinion it was a cloud.
4. My hypothesis is that the "trail" was simply a shadow of a cloud cast by the Sun.
5. Unless additional witnesses or photographs are located, which disprove the above, I conclude that it was a cloud.
6. Naturally, I welcome comments from blog readers, provided they have taken the time to investigate the case.

My Sydney research associate has taken a look at these photographs and offers the following comment:


"I took another look at the photos. I saved J’s UFO 2 photo (which shows more than her other one)
and zoomed it up. Didn’t do any processing with it. I just took another look at GY’s photo as is.
I think what might be considered to be a trail is merely the extension of the sunlit reflected pattern of
the cloud layer above it. The more I looked at K’s photos and particularly GY’s photo the more that’s
what it appeared to be. It’s just the positioning of the ‘object’ in relation to it the cloud pattern above it,which is at higher altitude,  that makes it look like the ‘trail’ is from the object itself. The wavy pattern that seems to indicate it is even more apparent in GY’s photo. Sunlight is falling though at some angle though on the right hand side of the ‘object’ as can be seen in both GY’s and J’s photo(s).
I couldn’t see how the shadow from it could be from the sun considering the low angle the sun was. The shadow if there was one is pointing in the wrong direction, due the very low position of the sun. But it’s true that the appearance and direction of the ‘shadow’ is influenced by the sense of perspective as seen from the ground so that’s a consideration nonetheless.
The only way I can see it being at the downward angle it is as if the sun light was refracted through the cloud (the ‘object’) That might be possible. (?) Alternatively, it’s from sunlight reflection from the base of the cloud above it,but from looking at the photo even that doesn’t look likely. So I think that one  can be eliminated.
On that basis I don’t see how it could be a shadow from the sun directly. The angle looks all wrong. So that leaves the ‘shadow’ must be merely an extension of the sunlit reflection of the cloud above it. It’s just the positioning of the ‘object’ in relation to it that makes it look like it’s from the ‘object’ itself. Note the ‘shadow’ doesn’t extend entirely from the entire length of the base of the ‘object’. It is from the right hand end but stops short of the left hand end. That detail to my mind tends to convince me the trail is merely an extension of the sunlight reflection of the cloud above it, and not related to the ‘object’ itself.
I don’t think there’s any doubt the ‘object’ is a cloud, the same as J thought and you did as well."