A woman, her brother, three friends of the brother, and her mother, were travelling in one vehicle, southwards from Tweed Heads on the main highway.

They spotted "...two very large orb lights in the sky to our right...At first I thought it was Venus and Jupiter, then realised they were too big and moving...They were moving diagonally  down, then started moving horizontally looking like they were flying right towards us. They then moved across the highway and behind Chinderah petrol station.

"Myself and my brother's friend were the only ones who could view them while they hovered and moved slowly behind the trees on our left hand side of the highway. There were several cars who seemed to view it also and they all pulled into the petrol station at once and stopped on the turn off at the highway.

"The orbs then headed south again travelling the way they were and then they were right in view on the left hand side of the car about 100-200 metres above us (mine and my brother's friend's side.)

"They started to cross back over to the right side of the highway and hovered directly above our car whilst we were going about 70km. The first orb manifested itself into a craft that I have randomly found a hand drawn picture that was posted 5 days ago that describes what Dane and I saw exactly. The other people in the car did not see the full craft because it was hovered over the car more on our side.

"It moved very slow, and the second orb light was about 100 metres behind the craft. The craft then manifested into the orb again and both of them continued in the direction they were currently flying."

"We drove to Pottsville (20km) and dropped off one of the kids off and decided to go back to the petrol station on the coast road to ask if anyone else saw what we saw. On the way, I'm Cabarita Beach. I noticed there were many planes in the sky at once and they weren't moving like planes. They were in a triangle shape with blue white and red lights at each point and there were 7 at the sky at once.

"I focused on one in particular, that then disappeared in front of my eyes."

I asked the main witness, the following questions. Her responses are below.

Q1. What colour were the orbs?
A1. "They were the colour of a warm light or torch. The same colour as the orb light in the picture from Byron Bay but much brighter because they were much closer."

Q2. What was the weather like at the time?
A2. "It had been raining on and off, that was also the strange thing. Upon both sightings it seemed that the whole sky cleared up out of nowhere. There appeared to be no clouds when it had just been raining seconds before. This happened both times in Chinderah and Cabarita and we all commented on that at the time. There was absolutely no sound coming off any of the flying objects even when the first  orbs (craft) were only 100-200 metres above our heads which made the weather and stillness even eerier."

Q3. Can you estimate how long it was between the time you first saw them and when they went behind the petrol station?
A3. Around 1 kilometre. The whole sighting went for approximately 3 kilometres. It felt much longer time wise. The orbs were also below tree height at this time."

Q5. Did the driver speed up or slow down from the 70km/hr?
A5. "Mum (Maree) slowed down from 110km to 70km upon first sighting and kept at that speed until we got to the petrol station turn off at the highway. She went to pull in so slowed down to around 30km and then decided there was too many people turning off and stopping on the road and it may be dangerous. She veered back onto the highway and sped back up to 70km, when I realised they were directly to our left of the car. So she was probably actually going slower than that but speeding up to 70km again."

Q6. Can you describe the process by which it changed from orb (light) to craft?
A6. "It didn't really manifest I don't think, the orb lights were still there just on the 3 points of the craft like the picture describes. I think just because it was on the right angle for Dane and I to actually see the craft, we saw the portholes that looked like plane windows but it was too thick to be a plane and wasn't in the same shape ( we also had blimps in the area flying around that day, and that's what I kept referencing to people. It was like a medium 24 seater passenger plane/blimp/drone/small spaceship all of them put together.) It seemed to me to be open on the side, but the hand drawn picture paints a better picture of what it looked like then explaining it as the picture really does look completely identical.

"It was dark but the orb lights gave off enough light to see the middle of it, and the portholes or windows had lights coming out of them too as a plane does, but brighter as they so turn the lights down on planes. These were brighter. All warm lights. If I had to say a colour of the craft itself it would have been white/silver/something but definitely not dark - that's why my brain kept going back to it looking like a plane."

Q7. What compass direction did they leave in?
A7. "When we last saw them they were going in the direction of north-west, or maybe south-west, I'm not exactly sure. But it was in a westerly flight path."

Q8. How did you lose sight of them? What was the last thing you saw?
A8. "I couldn't see the first one (that was the craft) while it was going over our car, was still in view of the second orb that was following it. Was concentrating more on trying to look out the right side window to see the craft once again but once it came into my vision again it was an orb again. Then the highway veers left so we lost view. The last thing I saw was the two orbs travelling slowly west heading towards the Tweed River."

"My mother Maree, said she never saw the craft but distinctly saw the orb lights the whole 3 kilometres. She was the first to actually say what's that although we were all looking at them anyway. Tom on the right hand side of the car in the back seat and Alison in the back back of the car were not looking up much and all us I think were quite frightened and just kept saying its a plane. It must be a plane (they were only 15.) While I explained to them that it defies physics. The only thing I could  come up with was maybe drones but have researched into that and purely by the size of the first one sighted (orb and craft) it was an equivalent of a bomber drone and I'm sure they wouldn't be flying them above civilians so low."


Q9. What was the total time duration from when you first saw them to when  you last saw them?
A9. "Approximately 3 kilometres."

Q10. At its closest approach when you saw the first orb as a craft, how big was it across, say compared to the full Moon?
A10. "The orb when it was at its closest was a lot bigger than a full moon probably three times the size of the moon that is rising. On first seeing it when they were further away, the first one was the size of a full moon then."

Q11. Was there any effect on the vehicle you were travelling in? For example, did you have a radio on?
A11. "No, unfortunately we didn't have the radio on and nobody thought to get their phone out, because we were too busy watching. All I know is outside was dead silent except the cars earlier. There was no sound at all, not even after effect sound."

The main witness mentioned "blimps" in the area at one point in her account. I determined that there is one, and only one, blimp flying in Australia at the moment. I found that the Appliances online blimp transited the area, and actually passed over Chinderah on 10 July 2015.

This airship is 39 metres long and 11 metres wide. It is illuminated from within by two 1000 light globes. It usually travels at 1000 feet altitude, and its maximum speed is approximately 72km/hr, which would mean that if it was flying at this speed above a car travelling at 70km/hr, it would appear to be hovering over that vehicle. It would perhaps seem a contender for the "craft."

I contacted the owners of the airship and asked them if it had been over Chinderah at about 1900 hours on 10 July 2015. Their answer was no! It left Brisbane at 0720hrs; passed over Chinderah at 11226hrs and arrived for the night at Evans head at 1728hrs where it was moored. It did not fly that evening.

This blimp can therefore be excluded from the range of possible conventional explanations for the sighting.

2. Was any part of the sighting due to aircraft?

I visited the Air Services Australia WebTrak website for Coolangatta airport, to the north of Chinderah. It turns out that Coolangatta's secondary radar covers the Chinderah area. Only aircraft (including helicopters) fitted with a transponder, show up on secondary radar.

I ran the program between 1800 and 200 hours on 10 July 2015. The only objects visible on this radar were aircraft arriving and departing Coolangatta (no helicopters) and aircraft transiting the area. 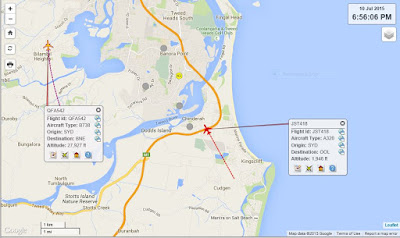 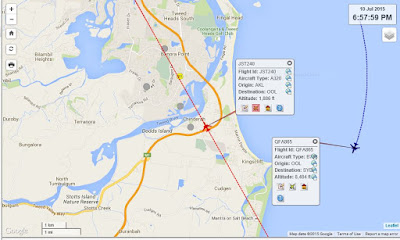 The above two images are screen shots from WebTrak. Two different aircraft passed right over Chinderah at the times shown, at a height of about 2000 feet. These times correspond to the main witness' time of 1850 to 1900 hours.

These aircraft, of course, should have been showing the standard red and green navigation lights plus anti-collision lights. These aircraft colours are different to the colours reported by the main witness.

3. Was any part of the observation due to the planets Venus and Jupiter?

Both planets, during the estimated 3-5 minutes duration of the sighting would have only moved 0.75 degrees across the sky. This does not agree with the main witness' observation of the trajectory of the "orbs" or description of the "craft."

4. Could the sighing have been due to a combination of things?

For example, were Venus and Jupiter initially seen; then aircraft lights were behind the petrol station? Based on the main witness' description of trajectory and appearance, I suspect not.

5. Could it have been a drone?

One of my associates asked "Could it have been a drone?" The close-up observation of the "craft"; even if not as close as the estimated 100-200 metres stated by the main witness,  would suggest not. However, with today's technology one cannot be 100% certain.  I can say that I have not come across anyone claiming to have staged the sighting using a drone.

6. Any other ideas?
We seemed to have ruled out Venus and Jupiter; aircraft (including helicopters) with transponders; the Appliances online airship, and in all probability a drone. This leaves me bereft of suggested conventional explanations which fit the details provided.. Naturally, I would be delighted to hear from anyone who has a proposed mundane explanation, provided they can back it up with evidence.

Based on the information provided by the main  witness, of the objects' trajectory, appearance, and behaviour, I cannot assign a conventional explanation, at the moment, to this sighting.