I'd like to add some further information to a post I published yesterday, which will provide additional background for readers.


Why did these reports come to Australia?

The file I recently found, National Archives of Australia (NAA) file series A452, control symbol 1969/4393, originated with an Australian government Department, namely the "Department of Territories." (DOT) Papua New Guinea (PNG) was an administered external territory of Australia, between 1949 and 1975. Hence this is why sightings occurring in Papua New Guinea, during that time, were forwarded to the Australian Department of Territories.

Dozens of documents referring to UAP sightings in PNG have previously been found by the author, on NAA file series. Most are to be found on file series A703, control symbol 580/1/1 which is the main RAAF sighting reports file series parts 1-35.

I also located copies of such reports, on  NAA files: 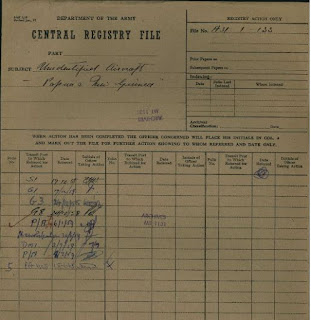 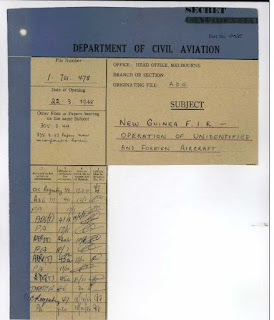 3. In the previous post, I also found that copies of the memos from the Administrator, PNG, were also being sent to the Commonwealth Scientific and Industrial Research Organisation (CSIRO.) I located a CSIRO file in the NAA, file series A8520 control symbol HM1/30 titled "Miscellaneous enquiries - general - UFOs" with a date range of 1959-1990. 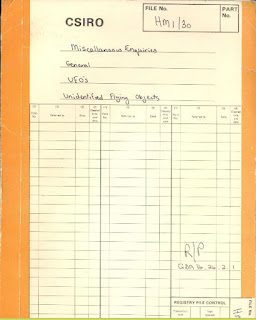 On this file I found copies of correspondence between DOT and the CSIRO. The CSIRO, for its part, simply seemed to file these documents and take no action themselves on the details contained therein. I have written a lengthy piece on the involvement of the CSIRO and UAP (click here.)

Digital copies of all three of the above files may be located and read, via the NAA website at (click here.)

I have also seen hard copies of documents on yet another file, owned by the DOT, with a date range of 1958-1970, titled "Flights by unidentified aircraft over PNG." No digital copy available.

There are probably more such files, if researchers would care to look; get them examined and then pay to have them digitised.

In 2004, in Newsletter 18 of the Disclosure Australia Newsletter (click here), I wrote a detailed article on sightings from PNG,  which includes further details on the involvement of the USAF ATIC in Dayton, Ohio, and their conclusion as to the cause of some of the sightings.

I hope readers will find the above material of interest. It is historical material, but in my opinion, very much of value.
By Keith Basterfield at July 09, 2015