Luis Elizondo on "Yesterday;" "Today;" and "Tomorrow" - the current state of UAP research

Episode 54 of  a recent  "That UFO Podcast"  featured Luis Elizondo answering questions put by listeners to that podcast. During the show he stated "We are probably doing more now behind the scenes than we ever have before." I, like many other podcast listeners wondered just what he meant by that? Now, thanks to the diligent eyes of blog readers Paul Reddington and Steven West, we have further information.

Luis Elizondo presented at the recent International UFO Congress, and as part of his presentation featured the following three slides. 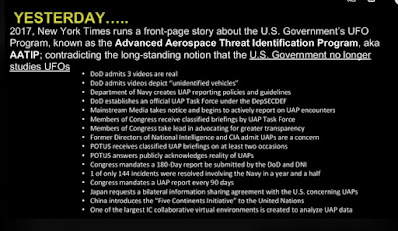 This first slide "yesterday" summarized the actions which have been achieved to date. 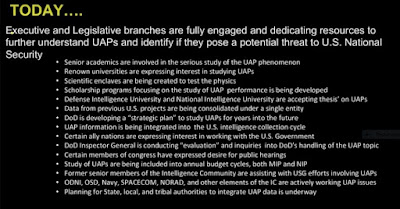 The second slide "Today" summarized some of the activities which are going on right now.

The third slide "Tomorrow" features hoped for, and speculative objectives in the future.

This is the one which most interest me, so I am going to take a closer look at it and see if I can draw out any further information that than the one line summary provides.

1. Senior academics are involved in the serious study of the UAP phenomenon.

The recent formation of "The Galileo Project for the Systematic Scientific Search for Evidence of Extraterrestrial Technological Artifacts" has brought a number of leading academics into our research field. There are many others associated with such organizations as the National Aviation Reporting Center on Anomalous Phenomena and The Scientific Coalition for UAP Studies. Of course, there have always been a small number of academics interested in the topic of UAP ever since the 1950's, but there are now more than ever being willing to be publicly identified with studying UAP.

The Galileo Project is housed at Harvard University in the U.S. It would be interesting to hear of any other university which is looking to get involved with UAP studies. I have not heard of any to date.

3. Scientific enclaves are being created to study the physics.

I haven't heard any more about this aspect.

4. Scholarship programs focusing on the study of UAP performance is being developed.

Nothing further has come to light from my perspective. Which scholarly institution(s) are interested?

The National Intelligence University is an institution for higher learning in intelligence and national security. As part of the process for education qualifications, students prepare a thesis on a selected topic. I deduce from Elizondo's statement that the two Universities has not previously been allowing students to prepare a thesis dealing with UAP, but now are prepared to?

Over the years a variety of higher education institutions have allowed students to write about UAP. Indeed there is a long list of "University UFO Theses and Dissertations - 1948-2016" compiled by Paolo Toselli." I scrolled through the lengthy list but was not able to find any from the two Universities named by Elizondo.

6. Data from previous U.S. projects are being consolidated under a a single entity.

The obvious question here is who is this single entity? The DNI report to Congress advised that copies of UAP reports will go to both the UAP Task Force/new entity under consideration and the U.S.A.F's National Air and Space Intelligence Center.

Civilian UAP researchers have been commenting on the fact that the recent UAP report from the Office of the Director of National Intelligence only went back to 2004. There are some 13,000 UAP reports with around 700 "unknowns" in the Project Bluebook archives alone. Note the use of the plural "projects." What else besides Bluebook?

7. DoD is developing a "strategic plan" to study UAPs for years into the future.

As part of the DoD response to the report on UAP to Congress, the Deputy Secretary of Defense, Kathleen Hicks issued a memorandum to the Department. In it she directs the Under Secretary of Defense for Intelligence and Security (OUSDI) to develop a plan  which includes procedures for collection of data, analysis of this data, staffing and associated budget for a long term study of UAP.

8. UAP information is being integrated into the U.S. Intelligence collection cycle.

As part of the OUSDI process it would make sense that in order to collect data on UAP, procedures would need to be put into place so that various U.S. Intelligence agencies each have a process to undertake that collection, and analysis.

9. Certain allies are expressing interest in working with the U.S. government.

In April 2021 media reports stated that the Japan Self Defense force was to draft UFO  protocols following the release of US UAP videos.

"Minister Kono confirmed at the Japan-US Defense Ministers meeting last month that the SDF and US Forces had agreed to cooperate on UFOs."

The Five Eyes agreement, is an intelligence sharing agreement between the U.S.; Canada, the United Kingdom; Australia and New Zealand. These countries would be a logical place for an extended global study of UAP. In the case of Australia, the Australian Department of Defense have indicated that they have no protocols concerning UAP.

We also know from media reporting that the British Parliament discussed UAP, after the release of the Office of the Director of National Intelligence report was released. The British Defense Minister stated that the United Kingdom would not be instituting any new research on UAP.

I have not come across any interest being expressed by either Canada or New Zealand, in working with the U.S. on new UAP studies. Canada, of course is part of North American Aerospace Defense Command (NORAD), which maintains sensor systems capable of detecting UAP.

10. DoD Inspector General is conducting "evaluation" and inquiries into DoD's handling of the UAP topic.

On 3 May 2021, the U.S. Department of Defense Office of the Inspector General announced it was conducting a new study related to UAP, titled "Evaluation of the DoD's Actions Regarding the Unidentified Aerial Phenomena." No date has been given for the completion of the project or the release of a public report.

11. Certain members of Congress have expressed desire for public hearings.

A number of members of the U.S. Congress have called for classified hearings on UAP, with a few indicating they would like to see public hearings. For a history of such hearings please click here.

12. Study of UAPs are being included in annual budget cycles both MIP and NIP.

Organizations will not have funds for studying UAP unless such funding is appropriated through their normal agency processes. I believe MIP stands for Military Intelligence Programs and NIP is National Intelligence Programs, though I stand to be corrected if any blog reader has information on these.

Former senior intelligence community members such as former ODNI John Ratcliffe have commented about UAP, so it is great to see that some of them are actively involved in the process.

14. ODNI, OSD, Navy, SPACECOM, NORAD and other elements of the IC are actively working up UAP issues.

It will be interesting to see if we ever hear any detail of what is going on with agencies other than ODNI, OSD and Navy.

15. Planning for state, local and tribal authorities to integrate UAP data is underway.

Although I have heard Luis mention this before, I have not come across any detail. Has any blog reader?