With all the current talk about the possible holdings of Congressional Hearings on the topic of UAP, I thought it might be useful to revisit some history. 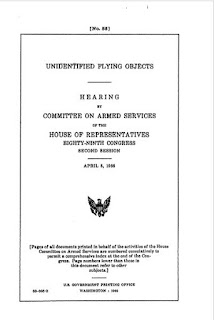 The House Armed Services Committee convened a Hearing. At this Hearing, the Hon. L. Mendel Rivers, Chair of the Committee  introduced the session. This was followed by a statement from the Hon. Harold Brown, Secretary of the Air Force. Professor J. Allen Hynek, then a scientific consultant to the Air Force then spoke. Various statistics re sightings were discussed; there was mention of the USAF Project Bluebook; and discussion of selected sightings, with a focus on recent U.S. cases.

C. Richard D'Amato was the counsel for International and National Security of the U.S. Senate Appropriations Committee. He was also active in UAP research in the 1990's.

UAP researcher Jacques Vallee, in one of the "Forbidden Science" volumes, in a diary entry dated 21 June 1990, wrote the following about a meeting with D'Amato:

"Are you thinking of new congressional hearings? I asked him."

"Not in the sense ufologists talk about Hearings as if they were a panacea. You can't set up such a process to find out the truth. In this town you must find out the truth first, and THEN you hold the Hearings." 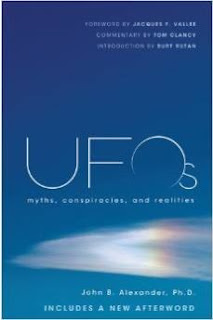 In his 2011 book titled "UFOs: Myths, Conspiracies and Realities" John B. Alexander wrote:

"The ultimate god for many UFO disclosure enthusiasts is to have Congress hold hearings. There it is assumed the truth will suddenly pour forth and...unfortunately, this is a very naïve position, as most investigative Congress hearings go nowhere..."

Alexander then went on to describe attempts to hold Congressional hearings, which he was involved in, in 1999 and again in 2005. Neither managed to succeed. If you haven't read this portion of his book, I would highly recommend you find a copy and do so.

"Former Nevada Senator Harry Reid thinks it might be time to hold Congressional Hearings into the mystery surrounding UFOs."

On 12 April 2018 Bryan Bender and Jacqueline Klimas of Politico hosted a panel discussion, which included Congressional Representatives Ami Bera and Randy Huleren, both members of the House Space subcommittee of the Science, Space and Technology Committee. The topics covered UAP.

Ami Bera stated that he talked with Chairman of the sub-committee Brian Babin as well as Lamar Smith. "I said we ought to have a hearing on this."

In a 4 July 2021 article in "The Hill" titled "Dem Lawmaker calls for hearings on UFOs" journalist Celine Castronuovo writes about a call for Congressional Hearings.

"Rep. Andre Carson (D-Ind), Chairman of the House Intelligence sub-committee on Counterterrorism, Counterintelligence and Counter proliferation, is calling on Congress to hold a "series of Hearings" on reported UFOs following last month's highly anticipated intelligence report on the subject. "My hope ...is that we will have a series of Hearings and possibly a public Hearing in the very near future..."

"If it is off-worldly, we have to take into account our advancements in terms of cellphone technology and why aren't these images being captured? Carson said. "We have to think about the nearly 4,000 satellites that are orbiting the Earth right now. Most of these satellites have cameras attached to them. Why hasn't any of that information been released?"

Were there any hearings prior to the above dates? One piece of documentation appears on page 21 of Gross, Loren. 2005. "The Fifth Horseman of the Apocalypse: UFOs: A History."  July-December 1963.

The relevant portions are:

"There have been two Congressional briefings on the Program, one in the summer of 1958 and the other in the Summer of 1960."

"I believe that the letter to AFNIN from Congressman Carl Vinson requires your personal attention since it suggests the possibility of a Congressional hearing."

I have found nothing further on the possible hearing.