Luis Elizondo speaks out on SAPs; other possible "hidden" UAP programs and much more

Episode 54 of "That UFO Podcast" is part one of listener questions, put to Luis Elizondo by podcasters Andy McGrillen and Dan. The following blog post presents some summary notes and quotations I have prepared after listening to the podcast. It is by no means a comprehensive transcription of the entire program, simply parts of it which I found the most interesting to me.

Question: According to Ross Coulthart's book "In Plain Sight" you worked at DOD SAP Central office. What can you say about your time and responsibilities at SAPCO?

Answer: SAPCO is actually subordinate to the Office of the Under Secretary of Defense for Intelligence. I managed SAPs myself.

"There were several meetings where I would go in with new information regarding AATIP and say, hey, does anyone know what's going on? And the response was no big goose egg, nothing.

Furthermore, what I will share with you, that I haven't publicly, is that the former USDI, before he became the DNI, Director of National Intelligence, whose name is Jim Clapper, General Clapper, who was also the director of several organizations before. A very good man.

Politics aide. You know, I don't take sides politically. I don't care if you are liberal or conservative, or anything in between. The bottom line, he was a very, very good intelligence officer and a very good leader when he was in.

And what I will say is that he was, he was, without a whole lot of detail, he expressed to me,, and it's something if you ever get a chance to talk to him; in front of my wife, he said, look he said, I'm really glad you are doing this. I'm really glad we had a UFO program. It's something that we should have done.

So, regarding SAPs, yeh, I would not have, not necessarily been managing all these SAPs, yet, I would have access , because of my 'need to know.'"

SAPs are compartmented and sensitive. "There are master lists of all SAPs, that certain people have access to. There are also oversight committees. Chris Mellon was SAPCO -when he was Deputy Secretary of Defense.

"These UFO programs, if they existed, beside AATIP, were probably been run rogue. There was no oversight. They were being run in a way that was out of minds, out of sight. So to speak. And that's problematic because we are an organization that's built on rules and regulations, and doctrine, and we have oversight for a reason. And so when the people who are responsible for knowing that information, are deliberately kept out of the loop. And then that's a significant (-). A legal issue. People can go to jail for that. So, I don't know how to emphasis enough that, if someone was running a rogue operation, you know, its a big no no.

I mean, I had, at least I had people in the chain or command and, at the secretary of Defense level and his echelons below that. They knew what I was doing. And I had that blessing to continue doing it. It wasn't that Lue Elizondo was just running some rogue operation. Anytime I asked, and had the authority, hey, I need to know what you guys are working on. People were shrugging their shoulders. We have no idea what you are talking about. That's true, not just with Chris Mellon. He'd tell you the same thing. So will Jim Clapper, who was eventually the Director of National Intelligence."

1. Clapper served as Director of National Intelligence between 9 August 2010 and 20 January 2017.  Prior to that he served for three years as the USDI.

2. Note the specific wording on the question of other than ATTIP UFO programs. Many UAP researchers seem to simply state that there were 4 other UAP programs, without citing any direct evidence. Here, Elizondo, qualifies his answer with "...if they existed..."

Are UAP a threat?

Question: You said on another podcast, that slide 9 could be related to Havana Syndrome. Wouldn't that mean that the phenomenon is an active threat? Secondly, are we in danger, as a species, from the phenomena? 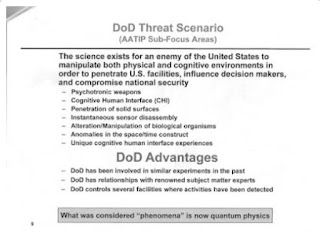 Answer: A signature is a signature. Havana Syndrome is not my thing. "Myself and several colleagues perceive some interesting correlations there. I'm not prepared to elaborate right now. I simply cannot."

"Potential threat is not the same as hostile intent." We have an intelligence gap - meaning only that anything goes. We have seen some capabilities but we don't know the intent.

"Biological effects are real. I'm not going to go into much detail in that. There's a reason why we has a DIRD by Dr. Kit Green - which by the way I highly respect - he's an incredible human being. There is a reason why we had a DIRD looking at biological effects. Right. You might think that it's all great and cumbyar, but then talk to someone who maybe had a little bit different experience and who is suffering from it."

Ways in which UAP have come to our notice

Question: Radar updates and nuclear assets have revealed UAP. What other things may have exposed the phenomena, to your knowledge?

Answer: "On another podcast I was asked where I would place sensors to detect UAP? "I said you only need one and I meant that. I'm not going to go into a whole lot of details right now. because we are in the process of looking at that as an option. There are some very intriguing signatures that if you knew what to look for, and how to look for them, you know, you should have a really, really, really good chance of being able to collect data. And the data in a way which gives a lot more fidelity than we are getting now. Possibly to be able to predict. So, that's what we are doing right now. It's a bit in its planning stages and nascence stage. So, I don't want to tip my hand too much...Obviously the big connection is the nuclear connection. That is concerning.

We are planning on executing this, in a phase one approach probably within the next six months...There's lots of things happening behind the scenes."

Question: If you were the Galileo Project team, what sensors would be needed? Infrasound?

Answer: Infrasound is one certainly interesting potential. We use it for other things as well. There's another way, that is even simpler. In fact, its absolutely simple...we are developing some high performing teams, the academic side, the scientific side, the technological side, governmental side. Again, there is a lot of things happening behind the scenes. I think the public's going to be very surprised and probably pretty excited once some of this information starts getting into the public realm because it means real results...We are probably doing more now behind the scenes than we ever have before."

Question: Given the facts, what is the current leading hypothesis?

Answer: It isn't ours. It isn't foreign adversaries. "Option C right now. Meaning something or someone else other than us." Beyond that I don't know. Need more data. Don't have the final story yet.

Question: Lue said that the three videos released so far are the least impressive. What makes a video considered for release?

Answer: Fidelity. Proximity. Telemetry, which can get you capabilities. If these are different from yours or an adversaries then that's good.

"As far as the 23 minute video. I've said for the record before, that I cannot elaborate. But there are people in the Pentagon that are aware of that video. That have seen that video, because they have corresponded with me about that video, when I was with AATIP. So, it has not gone and been lost forever. It's absolutely there. And at some point, if people are asked to testify, you know, Congress. They are going to have to tell the truth, that they've seen it too. 23 minutes is an awful lot of time...it's a lot of time to collect data."

Question: On another podcast, purpose of different UAP, e.g. are Tic Tacs different to triangles?

Answer: "No, we think they're using the same technology....just used for different applications...There's going to be some information on that in the near term, some more data...It's an assumption based on observation..."

Question: Have your views about death changed since AATIP?

Answer: "...things that occurred under Bigelow's watch and the previous director that, frankly, cannot be explained under modern day science...my focus was more on the UAP piece, even though I was tangentially involved with the AASAP stuff. I'll let the AAWSAP people talk about that..."

Question: The sixth observable is known to be biological effects. Have you personally been impacted?

Answer: "Yes. Impacted by them, because of friends."

Question: Did AATIP have interactions with the Department of Energy?

Question: Can you speak about the Vatican's involvement with UAP?