Undigitized UAP files in the National Archives of Australia

Over the years, the National Archives of Australia (NAA) have made available, and digitized, close to 150 Australian government files dealing with UAP. For a list, click here.

A recent inspection of the NAA's database, RecordSearch, reveals that there are currently four relevant UAP files, undigitized. I will provide the details below, in case any reader wishes to pay the NAA to place them online for us all to read. 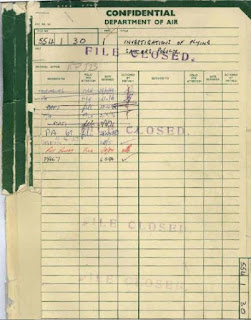 What is particularly interesting about this file, is that the date range commences in 1951. When the Disclosure Australia project ran between 2003-2008, seeking UAP files in the NAA, the earliest date range found was 1950-1955. This was NAA file series B5758, control symbol 5/6/Air Part 1, titled "Training Command HQ -report of unusual activity and aerial phenomenon." Status - open. Barcode 3083715. The NAA has a digitized online copy of this file.

So, given the scarcity of documents from 1951 it would be interesting to see just what early records are on this particular file.