The SIGMA2 technical commission of L'Association Aeronautique et Astronautique de France, (3AF for short) is a learned body of the aerospace industry in France. It recently published an important report on UAP, which the French refer to as Unidentified Aerospace Phenomena. This French publication was largely overlooked by the global UAP research community, due to the release of the U.S. Office of the Director of National intelligence report to the U.S. Congress. 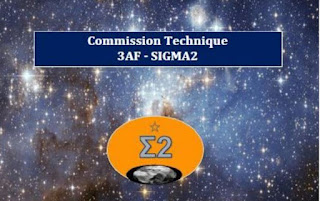 "1. Undertake desk research and the creation of a database for investigators of data and documents whose authenticity has been established and quality assessed.

2. Build a scientific and technical network with first, building links with recognized institutions in the field of UAP, starting with CNES-GEIPAN.

3. Establish a selection of case studies from available databases to conduct technical investigations.

4. Initiate a reflection on the physical manifestations of these phenomena and their links with the physical sciences.

5. Establish an inventory of the means and techniques of observations and, starting from a physical analysis, make recommendations on the improvement of observation techniques."

What's in the report?

"Regarding French data, SIGMA2 identified the origin of the surveys of UAP in France. They date back to 1951 with the opening of the MOC (Mysterious celestial objects) file by the Air Force Scientific Research Office, followed in 1954 by Ministerial Directive 267/EMFA/A/BS/ DR on MOC."

The report summary then provides details of recent U.S. initiatives, and the pre-release discussion of what would be in the UAOP Task Force report to Congress.

"However, at the end of 2017, SIGMA2 questioned itself on the 3AF/SIGMA2 site about this shift in American communications  policy and its purpose. Was it the work of private groups?...Are these completely unknown phenomena, are they foreign incursions?"

Referring to the U.K. Department of Defence report, Project Condign, the French report summarizes the U.K. report's conclusion as:

"The work concludes that there are no proven risks, particularly for air traffic and defense,  by emphasizing the possible origins of these phenomena in connection with atmospheric plasmas of natural origin."

SIGMA2 notes that the People's Republic of China (PRC) responded to the Pentagon's report, by describing "...a similar observations of regular incursions into Chinese airspace..."

SIGMA2 has established links with CNES-GEIPAN; French Air and Space Force; the Service Historique de la Defense; the Institute of Celestial Mechanics and Ephemeris Calculation of the Paris Observatory (who have a network of cameras networked with HF receivers); the Chilean CEFAA; and private U.S. groups NARCAP and the SCU; plus the Argentinian CEFAE.

SIGMA2 is particularly interested in cases with physical data; and selected cases from the GEIPAN database; the U.K. Ministry of Defense files, and American archives.

"...we were unable to conduct a study due to lack of data, as the IR video is insufficient without context data, or distance measurements. We have made an inventory of technologies studied by the U.S. Navy to explain, according to some, the IR and radar video recordings of objects moving at high speeds. These are, for example, filament plasma lasers or UAVs carrying jammers. According to the available data and our analyses, these advanced technologies cannot explain the observed nature of the kinematics and radiation observed at great distances."

Part of the SIGMA2 study in this area concluded:

"...a summary was drawn up by a doctor, part of the SIGMA2 commission in order to establish a parallel between certain cases of UAP identified and knowledge on the effects of ionizing radiation or not on living beings. The inventory includes, for example, the effects of microwaves on tissues, heart rate, memory etc depending on the types and level of radiation."

"We also conclude to the possibility of buoying plasmas that exist in the atmosphere, similar to certain types of ball lightning or Earthlights related to seismic activity...However, according to our analyses the displacement of these plasmas cannot explain the cases of UAP observed with high speeds and accelerations..."

"...in the documents identifying the analysis of supposedly recovered materials raise several  questions. What are the ejecta of metals in the liquid state? What would their function be? Would they play a role in the propulsion system using nuclear energy?"

SIGMA2 took a look at systems that monitor air traffic and space.

"Observations of UAP is not a taboo for the French Air and Space Force, which has proceeded to identify cases and provide the data to GEIPAN, when saved...The Air and Space Force is open to provide data but many missions to complete and case UAP observed are almost non-existent..."

"...new technologies and means of observation are gradually being deployed and giving rise to hope for new data collection."

"Likewise, it is necessary to involve physicists in order to compare the analytical data and the physical hypotheses..."

"Assuming increase scientific interest and a willingness to share data, holding an international scientific workshop on type D PAN cases would be desirable."

"It seems that some cases are beyond known science and may prompt research into extensions of known laws or lead to other discoveries, confirming alternative theories now qualified as speculation."

I received an email from blog reader Jerome Huck, who suggested we look at a particular website, click here.

Background Oke Shannon's name came to prominence with the unveiling of the document titled "EWD notes" , aka "The Wils...