The Australian Department of Defence - what assets might detect UAP?

On 16 June 2021, I submitted a Freedom of Information Act (FOIA) request to the Australian Department of Defence (DOD.) My request asked:

My rationale for submitting the above FOIA request was that, earlier in June 2021, I had submitted a series of UAP related questions to the media section of the Australian Department of Defence. Their response was:

"Defence does not have a protocol that covers recording or reporting of unidentified aerial phenomena/unidentified flying object sightings."

My FOIA request, simply aimed to see if there were indeed internal communications about such phenomena, which the media section had been unable to obtain.

Taking a closer look at some of the above is illuminating, and provides detail of Australian RAAF surveillance capacities, over land, over sea, and in space.

No. 1 Remote Sensor Unit (IRSU) is based at RAAF base Edinburgh in South Australia. Its role is radar surveillance and Space Situational Awareness. It does this via a range of sensors;

1. JORN is  collection of three over-the-horizon radar systems, proving a coverage of between 1,000 and 3,000 kilometres from each radar site. It monitors the air and sea to the north of Australia. It is designed to detect air targets equal in size to a BAE Hawk - 127 aircraft, and a sea surface object 56 metres, or longer. The three transmission stations are located near Longreach, Queensland; near Laverton, Western Australia; and near Alice Springs in the Northern territory. 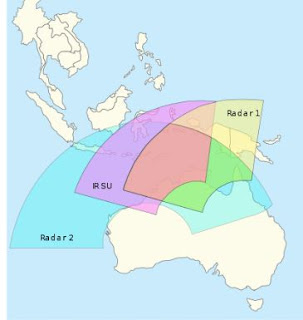 2. C-band radar.  This is located at the Harold E. Holt Naval Communications Station, in Exmouth, Western Australia. It commenced operation in 2017, and is the first southern hemisphere low earth orbit sensor system as part of the U.S. Space Surveillance Network. It is a joint Australian, U.S.A.F. initiative. It operates in the microwave frequency of 4-8 GHz. In 2017 the Australian Minister of Defence stated that the C-band system "...can accurately track several hundred objects a day and identify space debris and satellites."

The SST became operational in July 2021, and is also located at the Harold E. Holt Naval Communication Station, Exmouth, Western Australia. It is designed to look at any objects in earth orbit up to geosynchronous orbit. It has an aperture of 3.6 metres. It is a joint initiative of Australia and the U.S. Space Force.

In 2020, the Chief of the RAAF, Air Marshall Leo Davies, "...said the telescope would increase the capacity to detect and track objects in order to manage threats, including space debris and predict and avoid potential collisions."

As can be seen from the above, the Australian Department of Defence has a variety of very sophisticated sensors which can reach out to long distances to Australia's north; and into Earth orbit up to geosynchronous distances, 36,000 kilometres above the Earth.

"1RSU is the only operation unit charged with enhancing the ADFs Space presence and Space Situational Awareness (SSA). This is achieved with the C-band radar, Space Based Infrared System - Australian Mission Processor (SBIRS-AMP) and in future, Space Surveillance Telescope (SST)

Later, the fact sheet elaborates on the SBIRS-AMP.

The Department of Defence FOIA response

On 13 July 2021 I received a two page response from Group Captain, M. A. Kelton. Part of the response described the efforts that they went to to respond to my request. I quote from the DOD FOIA response.

"7. To ensure that all reasonable steps have been taken in this request, every practical avenue of locating the documents have been exhausted. Searches were conducted by 41 Wing (3CRU and 1RSU), 42 Wing, 44 Wing (452 and 453 Squadrons), and 92 Wing personnel who performed electronic searches for information matching the scope of this request, and no records were found.

8. Searches were made for emails bearing the words and/or phrases "Unidentified drone;" "Unidentified aircraft;" "Unidentified object" and "Unidentified aerial phenomena" for the period 1 January 2021 and 16 June 2021. Email record searches on the Protected and Secret networks included those of Flight Commanders, Operations staff, Wing and Unit Air Safety Officers, Air Traffic Control (ATC) Tower staff, and Air Battle Managers on duty during this period. Particular emphasis was made in searching email databases at RAAF bases Darwin, Tindal, Amberley, Oakey, Edinburgh, Williamtown, East Sale and Richmond. Searches for emails matching the criteria were also made within the Defence electronic filing system (Objective) of Surveillance & Response Group. The search criteria was also entered into the Defence Aviation Safety System and the Defence Aviation Hazard Reporting and Tracking System."

For anyone wishing to examine the results of earlier (from 2015) FOIA requests made to the Australia DOD, I would strongly recommend you take a look at: 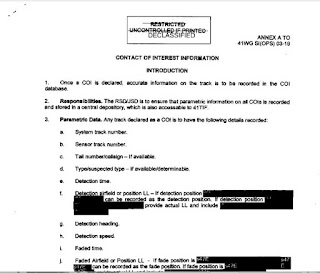 Paul Dean's work showed that the JORN system picks up what the DOD label as "contacts of interest." Naturally, most of these will turn out, upon investigation, to be tracks of illegal aircraft bringing in drugs, or being used by people smugglers, or for other illegal activities. Aircraft entering Australian airspace for illegal purposes go from being "contacts of interest" to "Unauthorised aircraft movements" (UAM.)

It is possible that other, more anomalous targets might be picked up from time to time. However, for the moment, there is no direct evidence that the DOD has any interest in these.