UAP research has been well funded in the past

Three individuals provided funds for UAP research projects in the 1990's. These were Las Vegas businessman Robert Bigelow; American financier Laurance Rockefeller; and Prince Hans-Adam Liechtenstein. Between them, they funded projects running into the several of millions of dollars.

In a post dated 24 July 2017, I explored what I then knew about Prince Hans-Adam's interest in the phenomenon; which gave some insight into his well informed views.

With the recent publication of Jacques Vallee's fourth volume of "Forbidden Science" [2019. Documatica Research, LLC. San Francisco] more information has surfaced, relating to Hans-Adam's interests, within the decade 1990-1999. Here then, are relevant entries from Vallee's diaries for that time period, with commentary by myself. 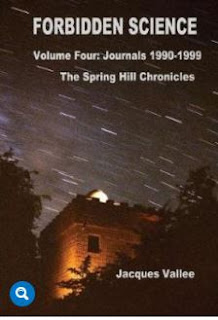 "At the SSE I met again with sociologist David Swift and with Brendan O'Regan, who I hadn't seen in years. We discussed Lazar and Hans-Adam Leichtenstein. "I went to Vaduz and the Prince told me about your conversation," Brendan said: "I'm getting used to visiting the same places as you, trailing you by a few months..."

Rima Laibow told me a surprising anecdote. At the dinner following the first Abduction Trauma meeting, the Prince reportedly said that he'd been briefed by the KGB, the CIA and NATO Intelligence. They told him people were being "taken" from every country.

"Yesterday, during the long drive from Ojai, psychologist and abduction researcher Maralyn Teare told me that Prince Hans-Adam and Robert Bigelow, a Las Vegas developer, had joined forces to provide Hopkins and Jacobs with a $200,000 grant to determine 'how many Americans have been abducted.' The result is chaotic, with the prospect of a bundle of dollars, anger rises among ufologists, egos are bruised, data gets corrupted or covered up."

Maralyn Teare, MA, was on the board of directors of the Academy of Clinical Close Encounter Therapists.

"Janine phones me about a letter from Prince Hans-Adam, a clever restatement of the first order 'Alien visitation' hypothesis, in a style both relaxed and precise. He seems certain that the truth will soon be found. Yet I hear that Hopkins and Jacobs are over their heads in their survey. Unable to spend the funds given to them by the Prince and Robert Bigelow, they allocated $125,000 of that money to their pet projects, only $75,000 being allocated to the survey."

This is the famous "Roper Poll."

"Prince Hans-Adam funds Hal's energy research but when it comes time to invest another $1.25 million he stalled, telling Hal that he was afraid of the consequences. Is the earth a jail planet? Are extraterrestrials prepared to ruin anyone who helps humanity get into space? He believe Aliens will make sure we don't get out of line.

Mike Swords tells me that Bob Bigelow and Prince Hans-Adam funded John Mack's survey of abductions because they're certain it will sway intellectual opinion. The similarities among cases will be overwhelming, he assures me.

The questions, "Is the earth a jail planet? Are extraterrestrials prepared to ruin anyone who helps humanity get into space?" seem very odd without some context.

In a conversation between Vallee and George Hathaway on 26 June 1989, quoted in Vallee's "Forbidden Science: Volume three," Hathaway provided Vallee with insight into Hathaway's and the Princes theory. They both held the view that "there is an extraterrestrial force that is monitoring and controlling men's drive into space: 'It's a question of how far we'll be allowed to go before some other entities put the lid on what we can do with our little rocket firecrackers..."

"The largely biased Roper poll sponsored by Bigelow and Leichtenstein has been mailed to 86,000 psychologists."

"Among recent letters was an elegant one from Leichtenstein responding to my article critiquing abduction research..."

"John Alexander called tonight...this led to a friendly chat about the recently concluded "MIT conference" organised by John Mack and paid for by Bigelow and Prince Hans-Adam...'You didn't miss much,' he said. 'There was zero independent thinking.'"

"In the last few years UFO advocates and abduction researchers have had large sums at their disposal: Grants for digs at Roswell, funding by Mr Bigelow and Prince Hans-Adam for the Roper survey, financing of conferences, the meeting at Cambridge, and current abduction studies, reaching well over half a million dollars."

"In the evening George Hathaway, consultant to Prince Hans-Adam, demonstrated his spectroscopic camera in the hotel garage. Thunderstorms cracked outside, shaking the hot Texas sky."

"Fred Beckman tells me that Prince Hans-Adam has assured Fred Alzofon (who visited him recently in Vaduz) that Perez de Cuellar, now running for the presidency of Chile had been taken even before the notorious "Linda" case, based on documents received by Hopkins, who believes all this. The documents, of course, are anonymous."

1. Dr Frederick Alzofon (1919-2012) was a physicist, who, among other things explored the control of gravity. His book, "Gravity Control with present technology" is available through Amazon Books.

2. For a summary of the famous New York "Linda" case investigated by Budd Hopkins which is said to have involved Perez de Cuellar, click here.

"SSE Council meeting. "Funding is in the hands of Bob Jahn, in touch with Rockefeller and Prince Hans-Adam, but I stressed that going through wealthy men would not necessarily open any doors among scientific institutions, it might have the opposite effect; political pressure is a double-edged sword."

"Hal was just back from London where he'd met a mysterious VIP, possibly Prince Hans-Adam. Hal is increasingly involved in ufological research."
By Keith Basterfield at April 15, 2019