I recently published a 52 page document titled "A Preliminary Catalogue of Alleged 'Fragments' Reportedly Associated with Sightings of Unidentified Aerial Phenomena where Analysis(es) was/were Conducted."  I am currently working on a similar catalogue, but this time focusing on analyses of "implants." It was therefore of interest to me, to see that there are references to similar items in Jacques Vallee's latest book "Forbidden Science: Volume 4," which has been recently released, of which I was not previously aware. This blog post captures these pieces of data. 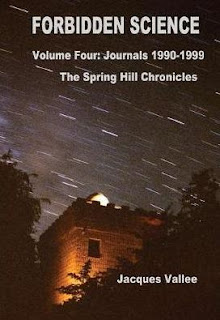 "At the Perfect Recipe Ron Blackburn confirmed Major Ed Dames was arranging to meet us in New Mexico for a night drive to hunt for Aliens. I asked Ron about his involvement with  Roswell. He assured me he knew a man who did radiation tests on the crashed material: 'It was amazing. He had a piece as large as this room, and he could lift it with one hand! The fellow is afraid to talk about it!

'Where do you think that material is now?' Blackburn shrugged" 'It could be anywhere since the Iran-Contra affair the folks in Washington don't take any chances that a Congressional staffer might stumble on the truth. It's all been farmed out.'"

"An intelligence agent, a contact of Bill Moore, has assured Whitley that the crashes really happened: 'Why is their story always so bad?' Whitley asked me with humor. 'They've been telling the same stupid Roswell tale for so long they need to update it periodically!'

Yet when he asked Brigadier General Arthur Exon about his tenure at Wright Patterson, the old man confirmed the Air Force had indeed dragged in some material that had fallen from the sky over Roswell. 'It was titanium and some other metal they knew about, but the manufacturing process was completely different,' he said.

The other metal was nickel, forming an alloy called Nitinol, the first 'memory metal' developed at Battelle by the team of Howard Cross in the late 40's. Another general George Schulgen, who led Air Force Intelligence, penned a secret memo on October 30, 1947 about 'unusual formation methods to achieve extreme extreme lightweight.'"

"Chinese ufologists gave him some metal filings from an object, which turned out to be an aluminum alloy, like several of the samples I have recovered. They made no claims about bodies."

"New debunkers have appeared in Russia, while Scott Jones brings back physical samples of UFOs from the Soviet Union with great fan fare 'to have them analyzed by the CIA.'"

"Roger Remy came over today with Jean-Luc Combier...Remy also met Marcel Vogel of IBM...Vogel had been asked to examine bits of supposed Alien hardware and tissue samples 'by someone in Intelligence circles who didn't want to go to a university for such work.' It showed evidence of frittage, he told me, where molecules are squeezed, but not fused over large sections in a way reportedly impossible for the time...The frittage technique is used to meld certain structures with other materials."

"She also told me about the 'Gateau Case.' This fellow saw a dark object take off from a field, after which he found some slag-like material at the spot. He was asked to give it all to CNES, but wisely kept one piece for himself. Velasco later told him it was ordinary slag, but Marie-Therese is having the last sample analyzed. (Note.)

(Note.) In the midst of much controversy I obtained fragments of that last sample in December 2017 and analyzed it in Silicon Valley.

1. I searched my "fragments" catalogue and cannot find any details of Vallee's analysis results.

2. Please see the comments section, for a link to a Youtube video where Gateau is interviewed.

"I asked him about the Gateau sample, which he remembered well. 'We did analyze it,' he said 'It turned out to be a combination of metals. The result of an odd series of heatings and coolings. But what good is a case like that? No piece of the actual propulsion system is available."

I searched the Internet and the GEIPAN database but couldn't find any reference to the "Gateau case." Can any blog readers assist with further information?

Meeting of the National Institute of Discovery Science (NIDS.)

"In the afternoon Dr Roger Leir came over. He had operated on the foot of a woman who had two implants and on the hand of a man who had one. Derryl Sims and Leir brought us the samples in question - tiny, wire-like objects - as well as half a dozen other samples removed from abductees. Our Board finds it hard to believe that the implants were anything but accidental bits of metal that had entered the victims' bodies..."

The main implants removed from the woman's foot turned out to be made of boron nitrite, a common industrial material."

"The implants from the last session have now been analyzed at Las Alamos. All five turned out to be made of common elements, aluminum and iron with calcium, copper and other components of the soil. 'Dirty metal wires' is the best way to characterize them, with nothing more than accidental transition through the body."
By Keith Basterfield at April 16, 2019