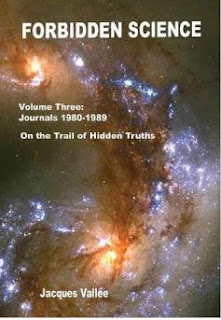 Blackburn first surfaced in 1986, and I have documented what Vallee said about Blackburn's UAP interests in the period 1986-1989, in a previous post.  You may wish to read this former post before proceeding further. This post, also provided some information about Blackburn's activities during 2000-2005, where he appeared to fall from the UAP landscape.

Now, with the publication of "Forbidden Science: Volume Four" we can learn what Blackburn was up to in the decade 1990-1999. So, the following are quotes from Vallee's latest diaries, plus some comments by myself.

"Now an Army officer named Ed Dames, one of Hal Puthoff's remote viewers, calls me from Maryland. He says he's a friend of Ron Blackburn and John Alexander. He 'has been psychically monitoring a site of paranormal activity' and wants my involvement."

"At four o'clock Ed Dames came to my office for a quiet talk...the data points to a mesa outside Los Alamos, so Ed Dames wants us to go there in May with Dr Ron Blackburn, a  senior Lockheed scientist."

"Over lunch today the enigmatic Colonel Ron Blackburn decided to come clean with me in anticipation of our trip to New Mexico. Ron gave me an impressive biography, with sanitized entries entitled 'Achievements in the field of national security.' He'd co-founded what I jokingly nicknamed the 'secret onion' group and co-organised a national panel on UFOs. In the first case, his co-founder was John Alexander; in the second case, it was none other than Kit Green, who never told me about this."

I wasn't aware that Blackburn co-founded the Advanced Theoretical Physics project. Based on my previous reading, I believe it had been started by John B Alexander.

"At the Perfect Recipe Ron Blackburn confirmed Major Ed Dames was arranging to meet us in New Mexico for a night drive to hunt for Aliens. I asked Ron about his involvement with Roswell. he assured me he knew a man who did radiation tests on the crashed material. 'It was amazing. He had a piece as big as this room, and he could lift it with one hand. The fellow is afraid to talk about it.'

'Where do you think the material is now?' Blackburn shrugged.

'It could be anywhere, since the Iran-Contra affair the folks in Washington don't take any chances that a Congressional staffer might stumble on the truth. It's all been farmed out.'"

"Over lunch again with Colonel Ron Blackburn at the Gatehouse in Palo Alto he revealed that the 'secret onion' group started in 1985 in the classified tank located in his basement at the Lockheed Skunk Works. Colonel John Alexander had brought him a list of the people for the inner circle. They divided the world into layers of concentric trust and ability. John introduced Blackburn to Ed Dames. Blackburn and I have firmed up our plans to travel to New Mexico on May 4th up to the high mesa - supposedly to meet some Aliens."

"Ron Blackburn is as tall as I am, younger by a couple of years. He walks stiffly and expresses himself hesitatingly without moving his head, his lizard eyes scanning in a subtle, disquieting way. We established a base of operations near Los Alamos. 'I am convinced the government is working on UFOs,' he told me.'What are the chances some witnesses are being fooled by special effects developed for psychological warfare?... 'They're pretty good,' he admitted.

Ron once developed magnetic UFO detectors at Kirkland Air Force base. They were stolen when he moved...In the evening Ron and I drove to Abiquiu, home of artist George O'Keefe...Eventually our leaders gave up the attempt to reach the top [of the mesa-KB.]

Vallee attends a meeting of the 'secret onion' core group. Blackburn is present.

"Ron Blackburn gave the Lockheed viewpoint. When he joined the Skunk Works at Burbank he worked with a scientist named Paul Tyler who encouraged him to investigate UFOs from the point of view of 'energy, consciousness and form - where form is negotiable.' Ron believes that Roswell was a true crash, with bodies."

"This morning, as we had just packed our suitcases, Ron Blackburn reached out dramatically to the telephone in his room, carefully took it apart 'in case someone had an infinity device plugged into the line.'...As out plane took off on the way back, Ron Blackburn pointed to a series of tall towers under the airplane. 'Those are the electro-magnetic pulse testing facility I built for the Air Force,' he said. 'Thousands of volts flow between those towers.'"

"Colonel Blackburn was striding across the parking lot when I arrived at the Perfect Recipe in Palo Alto this afternoon. He handed me a historic paper from the second meeting of his group, dated 1985. It proposed a compartmentalized scientific approach, with a small research team composed of Peter Sturrock, Allen Hynek and myself receiving funding (some $150,000 for my own part of the research, although I was never consulted about what I would do) for specific phases of activity. But it also, contained an absurd map of alleged UFO centers, bases and hypothetical 'entry points' at Mount Shasta.'

"He dismissed the 1987 report by Howard Blum about a secret group. Blum's book simply alluded to John Alexander and Ron Blackburn's proposed project I have nicknamed the secret onion. It went nowhere."

"Over lunch at Orchids today Fred related a new rumour spread by Ron Blackburn, about the death of Ron Johnson at the SSE meeting. Blackburn claims that Johnson was losing vast amounts of blood by his nostrils, eyes and ears. I told Fred that none of this happened, but he would rather believe a lurid story spread by Blackburn, who wasn't there, than my testimony as an eye witness.

I've checked with a doctor who gave me his own data about Johnson's death, putting Blackburn's irresponsible claims in perspective. The doctor was in the room and saw Ron die. He even gave me photographic documents and confirmed Ron only lost a few drops of blood from his nose. So why should I trust Blackburn again when he tells me he's handled the hardware from Roswell?"

News that Ron Pandolfi was the source of the leaks about the National Institute for Discovery Science (NIDS.)

"In my dismay I was glad to hear that Blackburn had commented 'With Vallee in there, it may come to something good...'

Robert Bigelow was looking to recruit for NIDS.

Bigelow: "I've also spoken to a fellow named Ron Blackburn, who's resume came through John Alexander, d'you know Blackburn? He's a technician, not a manager.' Here, I could only agree..."

"I continue to worry about confidentiality of cases and witnesses. Hal talks to Ron Blackburn expecting his confidence but Blackburn brags freely to Beckman and McCampbell..."

Blackburn's UAP interests, seem to have started out as a classic "nuts and bolts" perspective; and then, over time, veered towards information obtained through remote viewing; and later into the more controversial debate about the existence of a hypothetical companion to the Sun and its effects upon Earth. By 2005, he was attending a crash retrieval conference, back to the physical.

For my detailed blog post on the work of Dr Richard Charles Niemtzow who was researching the medical effects of close encounter, years before Christopher (Kit) Green, click here.

For my detailed post on the work of Dr Richard M Neal, who was interested in the abduction area of missing embryos, click here.
By Keith Basterfield at April 20, 2019