Those Pentagon UAP videos - just how were they obtained?

Todate, the To the Stars Academy of Arts & Sciences  (TTSA) has uploaded copies of three videos to its website, showing US Navy pilots encountering UAP. Just how these videos, dubbed "FLIR1;" "Gimbal;" and "Go fast" by the TTSA, were obtained has not, until today, been supported by documentation. Prior to today, perhaps the best source of information about the usual process, is a blog post dated 3 March 2018 written by my Melbourne colleague, Paul Dean. I would suggest you read it via the provided link, before resuming reading the rest of this post.

Just to be certain, I listened again to the interview which Paul cites, dated 25 February 2018, between Las Vegas journalist George Knapp, and former manager of the Advanced Aerospace Threat Identification Program (AATIP), Luis Elizondo. In part of that interview, Elizondo says:

"..very briefly go through the DoD process of how these things work. So, in essence, lets take the videos for example. There's a collective decision within the office that these videos should be placed on a community of interest, unclassified community of interest, with Defense industry partners and anybody and everybody to look at and figure out if this is something that they've seen before.

So, basically there's an approval process that goes through the Defense Office of Prepublication and Security Review, that we refer to as DOPSR. That is the one stop shop for the release of information that has to be reviewed to make sure its no longer classified. There's an internal mechanism within that office where they go back to the original classification authority, and validate whether or not, that information is indeed classified, and if it is, is it still classified and should it be released?

There are, as you could imagine with an organization like DoD there are lots of policies you have to follow. But two policies in particular are the DoD directives and instructions, in this particular case DoD directive 5230.09 and DoD instruction 5230.29. In there it gives you, if you will, the prescription of what you are supposed to do to get the information released. To include by the way a Department of Defense form 1910 which was indeed executed for the purposes of creating a community of interest for these videos. So that process was followed, and what most people aren't aware of, there were also emails. It wasn't just a form that was submitted.  And a week later the DoD officially came back and said this is allowed,  these videos are allowed to go out for unrestricted release."

Last night, Las Vegas time, George Knapp presented an item about the actual release process. Firstly, he opened the piece by referring to the recent US Navy statement about promulgating guidelines to its personnel to report unusual sightings, then he went on to say that there had been conflicting statements from the Pentagon "...about secret UFO research...and that the three videos weren't really released by the Department of Defense. Suffice to say we know know these Pentagon statements are not accurate..."

Knapp then revealed that he had secured a copy of the relevant DD1910 form "...the final step in a multi-step process issued by the Department of Defense Office of Prepublication and Security Review. The request specifies the three videos, Gofast, Gimbal and FLIR...the document shows that authorization for release, was granted on August 24, 2017..." Knapp then stated he had also obtained a copy of the relevant directive, "...this form shows the videos were released by the book...after the I-Team obtained the paperwork, we asked Elizondo if this is the form he filed with the Pentagon? He said he is not authorized to comment, that it's up to the Department of Defense..."

Here is an image of the page displayed on the news item: 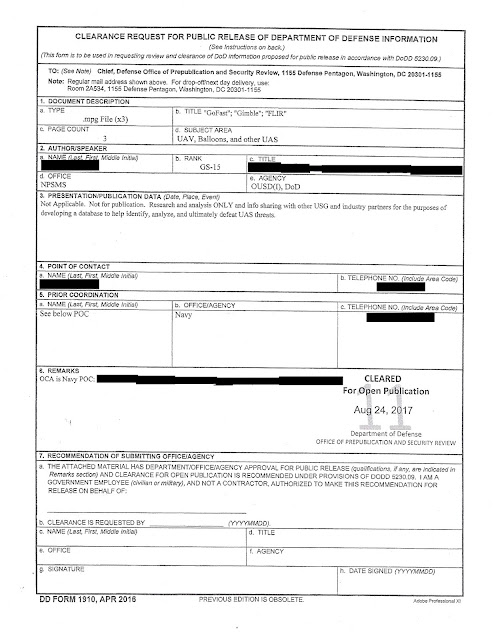 In a blog post dated 15 December 2019, researcher Tim McMillan reports on correspondence between himself and Pentagon spokesperson Susan L Gough. One section of her response read:

"The two 2015 videos appeared in the New York Times in December 2017. At that time, AFOSI conducted an investigation, focussing on the classification of the information in the video. The investigation determined the videos were not classified. That in itself (being unclassified) does not automatically approve material for public release."

The US Department of Defense issued a media releas.

The Department of Defense has authorized the release of three unclassified Navy videos, one taken in November 2004 and the other two in January 2015, which have been circulating in the public domain after unauthorized releases in 2007 and 2017.  The U.S. Navy previously acknowledged that these videos circulating in the public domain were indeed Navy videos.   After a thorough review, the department has determined that the authorized release of these unclassified videos does not reveal any sensitive capabilities or systems, and does not impinge on any subsequent investigations of military air space incursions by unidentified aerial phenomena. DOD is releasing the videos in order to clear up any misconceptions by the public on whether or not the footage that has been circulating was real, or whether or not there is more to the videos. The aerial phenomena observed in the videos remain characterized as "unidentified."  The released videos can be found at the Naval Air Systems Command FOIA Reading Room: https://www.navair.navy.mil/foia/documents.
https://www.defense.gov/Newsroom/Releases/Release/Article/2165713/statement-by-the-department-of-defense-on-the-release-of-historical-navy-videos/