UFO photographs from a B-52 aircraft over Australia

Boston researcher Barry Greenwood recently returned from a two week visit to the archives of the J Allen Hynek Center for UFO Studies in Chicago, in the USA. Barry kindly forwarded copies of scans of documents relating to Australia, to both myself and also to Melbourne researcher Paul Dean. Paul and I are spending time looking through all of these documents to determine if there is previously unknown material in them. I wish to thank Barry for his untiring efforts in the preservation of these invaluable historical records. 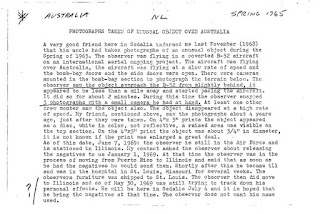 Looking through the contents of one file folder I noticed an uncited Newsletter article, titled "Photographs taken of an unusual object over Australia." Handwritten above the typed text, were the words "Australia," "NL'" and "Spring 1965." I have never come across this sighting. A search via the Internet and also a search of the NICAP 1965 chronologies failed to find anything about this sighting.  So if any blog readers can add further details I would be most appreciative. The text of the article reads as follows:

There were cameras mounted in the bomb-bay section to photograph the terrain below. The observer saw the object approach the B-52 from slightly behind. It appeared less than a mile away and started pacing the aircraft. It did so for about 2 minutes.

During this time the observer snapped 3 photographs with a small camera he had to hand. At least one other crew member saw the object also. The object disappeared at a high rate of speed.

My friend, mentioned above, saw the photographs about 4 years ago, just after they were taken.

As of this date, June 7, 1969: the observer is still in the Air Force and is stationed in Illinois. My contact asked the observer about releasing the negatives to us January 1, 1969. At that time the observer was still in the process of moving from Puerto Rico to Illinois and said that as soon as he had the negatives he would send them. Shortly after this he became ill and was in hospital in St Lois, Missouri for several weeks. The observer's furniture was shipped to St Lois. The observer then did move to Illinois and as of May 30, 1969 was still trying to track down his personal effects. He will be here in Sedalia July 4 and it is hoped that he brings the negatives at that time. The observer does not want his name used."
By Keith Basterfield at December 08, 2018