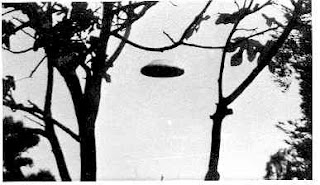 Since the late 1960's I have been aware of a series of four UFO photographs (three of which I have images of) said to have been taken in Adelaide in 1969. I also recall seeing a completed UFO report form, compiled by the photographer; in  the collection of the now defunct Australian Flying Saucer Research Society, although a search of my computer files failed to find a copy of this form.

Imagine my surprise upon going through copies of documents scanned by US researcher Barry Greenwood, to find a copy of the original report form, from Barry's recent visit to the archives of the J. Allen Hynek Center for UFO Studies in Chicago. 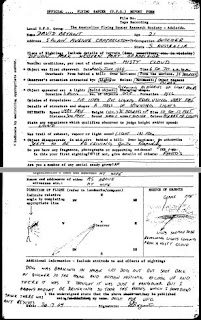 On the form, the photographer David Bryant,  gave his age as "21;" his occupation as "butcher;" and his then address as "5 Alan Avenue, Campbelltown" in Adelaide, South Australia. However, he stated that the place of the sighting was "Devon Park, Western part of Adelaide." Weather conditions at the time were given as "misty cloud." The date of the sighting is given as "Early June 1969" and time as "6 to 7am."

The object was first seen at an angular elevation of 35 degrees. It's light attracted his attention;  as well as its movement. The object appeared as a "solid object - glowing as a series of light bulbs." It was in view for three minutes. Asked for an "opinion on propulsion,"  he wrote, "No idea but lights revolving very fast." To "Details of structure and shape" he wrote "A mass of spinning lights." 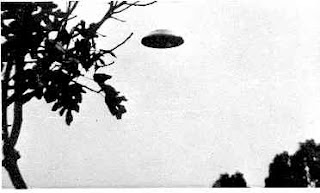 Speed was described as "very fast." Height "35 degrees up" and size "10 to 12 feet." Distance "300 feet." Sound: "None what so ever." Colour "A glare of lights." Object disappeared: "seem to be receiving (sic) rapidly." Do you have any fragments, photographs? "Photos." Name and address of any witnesses: "As above. My wife." A sketch shows the object was to the south-west of the observer. 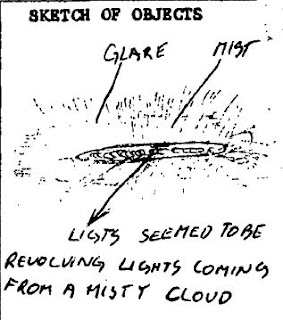 Under additional information: "Dog was barking in house. Let dog out but shot back in quickly to the house and turn in instinct to look up and there it was. I thought it was just a hangover but I had not been drinking so took the photos which I didn't think there was any results." 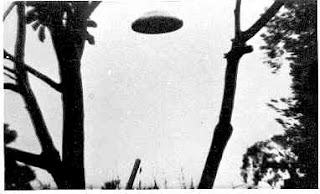 I am not aware of any detailed investigation report on either the series of photographs, or the sighting.
By Keith Basterfield at December 09, 2018