The classic Canberra Airport sighting of 1965 - UFO or Venus?

I am continuing my examination of the scanned copies of material, arising from Boston, USA, researcher Barry Greenwood's recent visit to the archives of the J. Allen Hynek Center for UFO Studies in Chicago.

One Australian case from 1965, which features time and time again in the UFO literature, happened on 15 July 1965, where a number of staff at the Canberra Airport reported watching an unidentified light in the sky during broad daylight.

In a series of blog posts dated 29 September 2011; 11 December 2011; 9 January 2013; and 15 December 2013, I reported on the information on this sighting gathered from a number of sources; both from Australian government files and newspapers.

Within Barry's CUFOS material I located items which I had not seen before. Firstly, there was a Sydney Morning Herald article dated 18 July 1965 and titled "I talk with the men who saw "that thing," by reporter Graham Gambie. I will quote from this article: 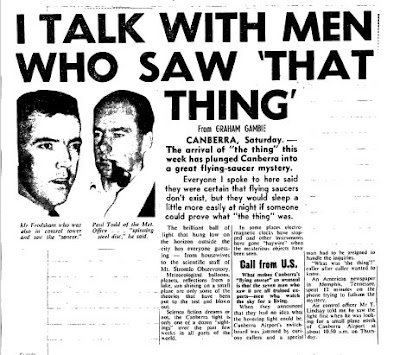 "Everyone I spoke to here said they were certain that flying saucers don't exist, but they would sleep a little more easily at night if someone could prove what "the thing" was."

"The officer-in-charge of Civil Aviation in Canberra, Mr A B Lindeman, said: 'I wish Mt Stromlo would tell us it was a planet. I don't like something in the back of my mind I can't understand.'"

"Dr D B E Westerlund of Mt Stromlo's observatory said that if the light was coming from the north-east it would almost certainly be the planet Venus."

"Mr Lindsay said: 'I've been in the job for two and a half years and I've never seen anything like it before...It wasn't Venus as has been suggested. I'm sure of that from the position..."

A large range of international and  newspaper also carried reports of the sighting. It must be recalled, that in 1965 there was a wave of sightings in Australia, so interest in the topic was already high. 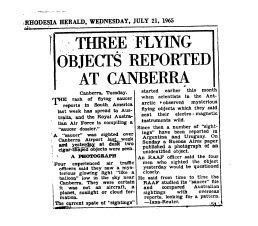 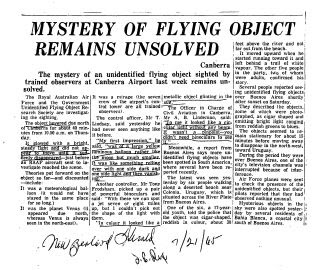 Barry's work shows that literally dozens of articles about the sighting appeared in other international newspapers.

After the initial wave of newspaper articles, only a few carried the results of the official RAAF investigation of the sighting. I will quote two newspaper articles below, which feature opposite and contradictory view points. In one, the object is identified; in the other there is failure to identity the origin of the object.

Canberra - An unidentified flying object seen high in the sky near Canberra on July 15 is understood to have been identified as a large weather balloon. An investigation by a security team from the Royal Australian Air Force is believed to have dismissed the likelihood that it was an intruding aircraft."

The RAAF report released today, suggested it was probably  a high altitude meteorological balloon of a type periodically released at Wogga in NSW. The balloons could be seen from a considerable distance, often had a halo like appearance and sometimes appeared  to change colour. Other explanations offered by the investigation team are that the object was a brief condensation trail from a high flying jet, or the planet Venus."

I checked with the National Archives of Australia and on file series A703, control symbol 554/1/30 Part 2, page 72 I found that the RAAF report was in the form of a press release from the Minister For Air and dated 30 July 1965, which I image below: 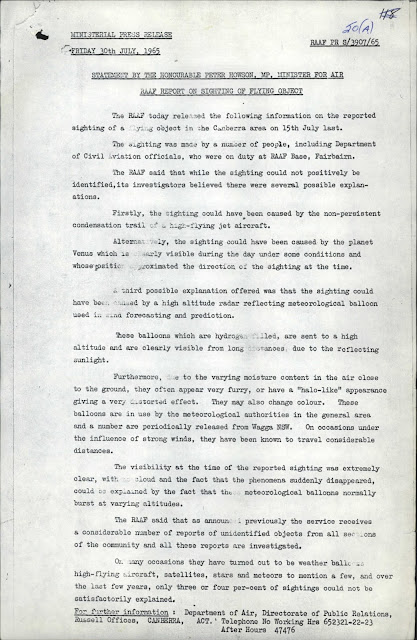 Thank you again to Barry and CUFOS for this historically invaluable material.