I was recently re-reading John B Alexander's book "Reality Denied." (2017. Anomalist Books, San Antonio, Texas.) In chapter one he relates his experiences working for Robert Bigelow's National Institute for Discovery Science (NIDS.) On page four, Alexander writes of Bigelow "...NIDS was not his first foray into supporting PSI research. For a time, Angela Thompson had done work at the Bigelow Foundation..." I wondered just who Angela Thompson was, so conducted some research.

Dr Thompson Smith is listed as a member of the advisory board of the Exopolitics Institute.  Here, I found:

"Dr Angela Thompson Smith's primary qualifications were in nursing and social work in the U.K. She gained her BSc in Psychology at the University of Wales, in Cardiff; her M.S. at the Facility of medicine of Manchester University, England and later, her PhD. in Psychology with Saybrook University, San Fransisco, CA. Dr Smith continued her education with united Way of Southern Nevada/UNLV where she completed the certificate in Non-profit management.

Dr Smith has a wide experience of research and management having worked as a research analyst at the University of Medicine and Dentistry of New Jersey (UMDNJ) and, later as a staff member with the Princeton Engineering Anomalies Research (PEAR) Laboratory, at Princeton University, New jersey. In the southwest, Dr Smith became Research Coordinator with the Bigelow Foundation and taught professional; development courses through the University of Nevada, Adult Continuing Education program.

Following five years as a staff member of PEAR (1987-1992) Dr Smith was employed as Research Coordinator with the Bigelow Foundation (1992-1994.) Prior to The Bigelow Chair in Consciousness Studies at The University of Nevada Las Vegas (UNLV), before the Consciousness Research laboratory at UNLV, and before the National Institute for Discovery Science (NIDS) in Las Vegas, there was the Bigelow Foundation. Incidentally, according to the Secretary of Nevada business name search,  NIDS is still listed as an active business name as of 2018. 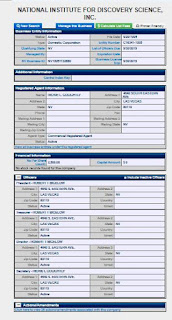 In the past ten years she has worked as a private contractor for industry, businesses around the United States and abroad. Dr Smith was ordained as a shamanic practitioner in 2010 following decades of training and experience.

Dr Smith was also trained in remote viewing (RV) by two of the ex Stargate remote viewers, Paul Smith and Lyn Buchanan. She now works through Mindwise Consulting as an RV trainer, consultant and researcher.

As well as publishing scientific articles in peer- reviewed scientific journals such as Cortex and the Journal of  Humanistic Psychology, Dr Smith has published four books and is working on three more including Voices from the Cosmos that she is co-authoring with C B Scott-Jones. Voices from the Cosmos is based on Scott's PEACE Initiatives plus as series of interviews with selected on-Earth and off-Earth ET races that were commissioned in 2006 which give important insights into ET sociology, psychology and society."

On another site, I found the following:

Angela M Thompson Smith was born 30 April 1946 in Bristol, England and her maiden name was Tanzell. She married, then later divorced, Ralph Thompson, then remarried to David A Smith in 1997.

- "Diary of an Abduction: A scientist probes the enigma of her alien contact." Hampton Road Publishing. Charlottesville, VA. 2001. Here she explores the story of her own encounter with the paranormal.

Thompson, A M and Smart, J L (1993.) "A prospective study of the development of laterality: Neonatal laterality in relation to perineatal factors and maternal behavor." " Cortex 26, 649-649.

Other books of hers, are:

What was the Bigelow Foundation and what did it do?

"The Foundation carried out multiple projects including follow-ups to the Bigelow funded Roper Report on Unusual Personal Experience; seminars on alternative health and collaborative research in Las Vegas, central Nevada and Alabama; research assistance to researchers such as Budd Hopkins in New York, and a radio show Area 2000: the fore runner to Art Bell's Coast to Coast program. Area 2000 featured many experts from the fields of ufology, alternative health, alternative energy and parapsychology and ran through early 1994." [Source click here ]

In a Mysterious Universe article dated 13 January 2010 Amelia Crater detailed Robert Bigelow's interests and activities regarding UFOs and the paranormal. In part the article read:

"One person who had an early glimpse of Bigelow's anomalous career is Dr Angela Thompson Smith. She has written about her experience at the Bigelow Foundation in 1992 after she was hired as a liaison between the PEAR Institute at Princeton and the Bigelow Foundation. She ended up moving to Nevada and was on hand at the inception of many of the Bigelow projects discussed in this article..." Unfortunately, the link given to her writing on the Foundation no longer works, and a check through the Wayback machine website, failed to find the piece.

On another site I found a PDF file which listed a comprehensive bibliography of eight decades of consciousness research. Among the bibliography, I found:

I went to the Nevada business search website and found that there was an entity, Nevada business ID number 19921073542 listed there, with the name of "The Bigelow Foundation Inc." Its status is listed as "Active" and its "Type" is a "Domestic corporation." The filing date with the Nevada Secretary of State was shown as 12 April 1992. Like many of Robert Bigelow's companies, the registered agent shown was one Rickie L Golightly. Robert T Bigelow is President, Treasurer and Director. Here is an image of the relevant form: 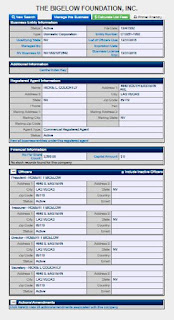 Like all of Bigelow's business name registrations, there is nothing to tell you the nature of "The Bigelow Foundation, Inc."

Dean Radin is a parapsychologist who holds degrees in Electrical Engineering and a PhD in Psychology. On a website it mentions that he investigated PSI phenomena at Princeton University; the University of Edinburgh and the University of Nevada, Boundary Institute and Internal Research Corporation. The website states that one of the sources of his funding was the Bigelow Foundation of Las Vegas.

In 2004 Radin published a paper, titled "Electrodermal Presentiments of Future Emotions" in the Journal of Scientific Exploration Volume 18, volume 2 pp 253-273. The paper was based on a series of experiments which he conducted between 1996 and 2000. In its acknowledgement it states that "Experiment 1 was supported by the Bigelow Foundation of Las Vegas, Nevada." Part of the early work was published in a 1997 paper titled "Unconscious perceptions of future emotions. An experiment in presentiment." Journal of Scientific Exploration Volume 11, pp 163-180.

I also found a website where there is a CV for Radin.  Under the term "Research grants" it states that between "1993-1996 Bigelow Foundation, Las Vegas, Nevada. Research area: Mind-matter interaction."

On the website of the "Anomaly Archives" I found part of the story of the UFO Research Coalition. Here it states that in 1993 The Fund for UFO Research joined MUFON and CUFOS to form the Coalition to conduct major projects, "...at the suggestion of Las Vegas builder Robert Bigelow who promised major funding."

It continues that in 1994 "...disagreement over control of the UFO Research Coalition lead to a complete break with Robert Bigelow."

On the Hathaway Research International website, there appears, under the area of "our past research projects" two interesting statements:

1. "Field investigations of anomalous aerial phenomena for private research institute." The dates given for this are 1992-1994. This was exactly the time frame when the Bigelow Foundation was active in this area.

Angela Thompson Smith (ATS) appeared as a guest on a May 2020 edition of Erica Luke's "UFO Classified." Part of the discussion was about her association with Robert Bigelow. The following are my notes from that appearance.

ATS - In 1992 I went to Las Vegas and was dating a man named David Smith, who turned out to be the brother of Paul Smith - the remote viewer. Still at PEAR but this was winding up. Doing my PhD at the time. I wrote letters to various people looking for my next employment. Stanley Krippner knew someone who knew Bigelow. Brenda Dunne got a phone call from Bigelow who was sounding Brenda out about me. I went to California - PhD - was at a school party and a guy said he was a head hunter. Said he'd fill me in on the job. So my job interview was conducted on the steps outside the party.

Then I went to Las Veags in the summer of 1992. Met Robert Bigelow at a conference - he showed me around and told me of his ideas. When people learned I was talking to Robert Bigelow I became the golden girl - people looked to Bigelow for funding. Moved to Las Vegas in the fall of 1992 - Research Coordinator for Bigelow. It was an adventure and new. Really good move.

Erica asked ATS what were ATS' impressions of Bigelow?

ATS - My perception was that he was highly intelligent; but had a short attention span. When he came to my office, he would jump from one concept to another. Very fascinating individual. Very focussed. When he got an idea he ran with it. I was there pre NIDS. He was kind hearted.

I met a lot of people who came to talk to Robert Bigelow. He did fund some people, crop circle research and UFOs. I was there two years. When I left his employee I didn't see him for years. It was at a joint conference SSE/IRVA [2018? - KB] and he offered group tour of his facility. I went up to him and he remembered me. He always reminded me of Tesla, similar kind of personality.

EL - Who was he involved with pre NIDS?

ATS - Group of 8-9 folks. John Alexander and Hal Puthoff were the two I was mainly involved with.

EL - Did you ever meet Kit Green?

ATS - No, I never did. Saw him once at a conference but did not speak to him.

One of my main jobs was fielding inquiries. Assembling a library. Preparing a database of reprints and projects. We also had a radio program. Linda Moulton Howe and George Knapp read the news. Summer, June 19993 , show called "Area 2000." Every two weeks for 1.5-2 hours. My job was to find material for Linda and George to read on air. After six months Robert Bigelow lost interest and the show closed. The very first show was John Alexander speaking about his interests. July 4th.

Robert Bigelow once sent me to Lake Gunderson, supposedly a hot bed of UFO activity. Told me to go find a policeman and interviuew him about cattle mutilations. Fiff )phonetic) Alabama police officer. Ted Oliphant.

Cattle mutliations was one area which Robert Bigelow and I disagreed on. I found information about new laser research and thought cattle mutilations was human related. He disagreed. I did write this upm in one of my books "Diary of an Abduction." 2001, but now out of print.

Also with Robert Bigelow, I had a paper filing system. Large collection of papers. Set up a library on anomalous topics for Robert Bigelow. Topics of interest included parapsychology; the after-life, reincarnation, UFOs.
By Keith Basterfield at November 22, 2018

Email ThisBlogThis!Share to TwitterShare to FacebookShare to Pinterest
Labels: Bigelow