The "UFO" in the picture/video frequently turns out to be an out of focus bird/insect; a sun dog; searchlights on clouds; internal lens reflections of such sources as the Sun and Moon; and of course, fake, computer generated images.

I was in my garage searching for some information about my car when I heard the local bird life in an uproar. I went outside to see what was disturbing the birds, thinking it was the resident sea eagles or maybe a falcon flying about.

The majority of birds were magpies, 10-20 in all, crows and a couple of curruwongs with a few silver eyes.

What struck me as being unusual is the number of magpies. Usually you see them in a family group of 2 adult birds with 2-3 young ones flying around them.

On further investigation to see what had made them become so distressed I saw an object drifting away from me at about 60-80 metres above the ground travelling at about 1-2 metres a second. It was travelling in an easterly direction and did not change course or alter its height above the ground. There was no noise. Thinking it was a drone no change of direction. When I first saw it, it was probably 200 metres away. It was a dark colour with a round appearance in the top half with a ridge around this section and the lower section looked like a hoop hanging below it with some sort of grey object attached to the lower section of the loop. I managed to get some pictures of it and the best one is attached to this report. Do you think this is a UFO?"

Immediately upon seeing the pictures I thought that I knew what it was. Anthony spoke to the witness and emails were exchanged between the two of them. Here are the pictures. 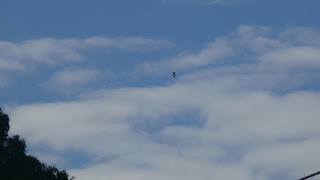 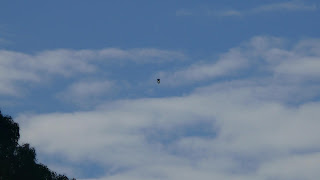 Do you know what it was?

It was a Mylar, helium filled party balloon! The witness himself arrived at the same conclusion.

Another IFO (in this case an Inflated Flying Object) to add to our list.

P.S. A check of the weather for the location from where the photographs were taken, revealed that on that day, at that time, the wind was blowing at 9km/hr from the West, which would naturally cause the balloon to drift gently to the east.

I would like to thank the individual who took this latest photograph, for their permission to reproduce the photos and the text of their report to UFO Research (NSW) Inc.