In a previous blog, I reported on the contents of a Defense Intelligence Agency (DIA)  "Solicitation" dated 20 August 2008, which sought bids from outside bodies for work that the DIA wished to undertake for the Advanced Aerospace Weapon System Applications (AAWSA) program, which later became the Advanced Aerospace Threat Identification Program (AATIP), which its second program manager, Luis Elizondo, acknowledged worked on studying UFOs.

We now know that Bigelow Aerospace was awarded the contract to work on the AAWSA program, and that this occurred after the "solicitation" closed on 5 September 2008.

Before moving on to the main thrust of this blog post, I wish to point out four aspects of the "Solicitation" which have a direct bearing on what I have just found. These are:

1. "It is expected that numerous experts with extensive experience (minimum of 10 years) in breakthrough aerospace research and development will be required to meet the demands of the above program."

2. "Contractor company and personnel proposed shall be clearable and able to obtain a security and facility clearance upon award of the contract. All requirements specified in this SOO may be based on materials classified at or below Top Secret with access to Sensitive Compartmented Information...The contractor shall ensure that each individual assigned to this contract shall be identified, cleared, and approved through DIA/DAC-3 PRIOR to granting that individual access to, or authority to generate classified material in association with this effort."

3. "It is anticipated that travel will be required for this contract."

4. "At least one member of each analytical team must have a PhD."

Keep these requirements in mind as you read on.

We also already know that Bigelow Aerospace created a subsidiary company to operate the AAWSA contract, which was called Bigelow Advanced Aerospace Space Studies (BAASS) in 2008.

I can now reveal that by September 2008 BAASS were advertising that:

"Bigelow Aerospace Advanced Space Studies (BAASS), a sister company to Bigelow Aerospace, is a newly formed research organization that focuses on the identification, evaluation, and acquisition of novel and emerging future technologies worldwide as this specifically relates to spacecraft. BAASS is headquartered in Las Vegas, Nevada.

"We are seeking experienced scientists to join our research teams. If you are an inquisitive outside of the circle thinker, who is detail oriented and who is looking for a challenge, this is a unique and exciting opportunity to advance your career and to be a part of cutting edge research.

"Impressive candidates will need to have 10 or more years of research and hands on experience in the disciplines related to aerospace sciences specified including:

"Several positions are also available for research scientists in the disciplines of:

"A Masters or PhD in a relevant  field is a plus. Candidates must qualify for secret and top secret clearances and must be willing to submit to a thorough background check.

" For all positions, some travel - both nationally and internationally - may be required. 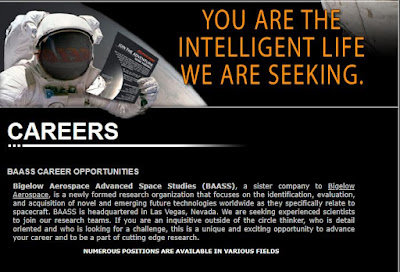 I note that the same positions, minus those of Forensic pathology, Psychology, Social Psychology and Sociology (which do not appear in ads dated 18 December 2008) were on offer throughout 2009 and as late as early 2010.

Looking at the phrase "...identification, evaluation, and acquisition of novel and emerging future technologies..." which appears in the BAASS advert, certainly also fits in with the theme of the AAWSA "solicitation." However, what are we to make of the use of "as this specifically relates to spacecraft."? What spacecraft? Earth made ones or someone else's? Perhaps it is just a poor usage of the word "spacecraft."

The fourteen areas of expertise are an interesting compilation of areas you would expect ( e.g. physics, propulsion, stealth technology) and ones you would perhaps not expect (e.g. Biological Cognitive Interaction) and what to make of the "Forensic Pathology"? Curiously, this area of "Forensic Pathology" had disappeared from the BAASS advert by 18 December 2008, suggesting that the position had been filled. In addition, readers should note that "forensic pathology" was the specialist area of former Central Intelligence Agency employee, Christopher (Kit) Canfield Green. For a detailed look at Green's work, take a look at a series of earlier blog posts, by my former blog co-author Pauline Wilson, here,  here, here, and here.

At this point, readers may like to take a look at the statement from a a senior manager at BAASS which appeared on the LasVegasnow website updated on  9 May 2018. This includes the words "One of the major successes of BAASS was in adopting the novel approach of utlizing the human body as a readout system for dissecting interactions with the UFO phenomenon." It would appear that George Knapp and his team have been able to locate a senior BAASS manager, and secure a statement from that (unnamed individual.)

The locating of both the DIA AAWSA program "solicitation" and now this BAASS call for individuals to undertake the AAWSA program work, fills in some previously unknown details about this program.

Hopefully, individuals who have additional information, will share this with us in the immediate future.
By Keith Basterfield at May 10, 2018