When did Bigelow Aerospace Advanced Space Studies start and where is the AAWSA contract?

In a previous post, I established that former Marine Corps aviator, Douglas Kurth, one of the witnesses to the 2004 USS Nimitz, "tic tac" UFO, commenced working for Bigelow Aerospace Advanced Space Studies (BAASS) in December 2007, some nine months before that company is said to have been awarded a Defense Intelligence Agency (DIA) contract under the Advanced Aerospace Weapon System Applications (AAWSA) program.

Part of Kurth's LinkedIn profile page stated that he was "Program lead - novel and emerging space technologies targeting operational deployment in 2040" and that he "Directed and managed a team of 40 scientists, engineers, analysts and researchers" and that he was a "Technical expert in advanced aerospace concepts and aerodynamics."


When did BAASS start?

I went looking through official records of the US state of Nevada, for clues as to when BAASS came into being. 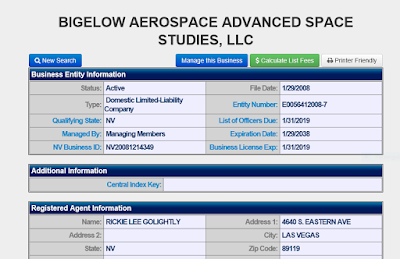 It can be seen from this, that BAASS commenced on 29 January 2008, some eight months before being awarded the AAWSA contract, and up to two months after Douglas Kurth commenced work.

What is also of interest is the section labelled "Officers." here, where you would expect to find the name of an individual, instead it reads " Managing member - International Space Hardware Services LLC."

I looked up International Space Hardware Services LLC. I found that the file date for this business was 31 October 2007. 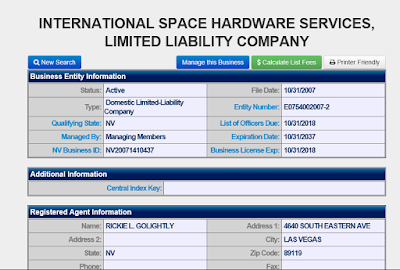 Who were the officers of this entity? "Managing member - Bigelow Aerospace SPC, In."

You guessed it, I looked up "Bigelow Aerospace SPC, Inc." The file date for this entity was 18 January 2005. 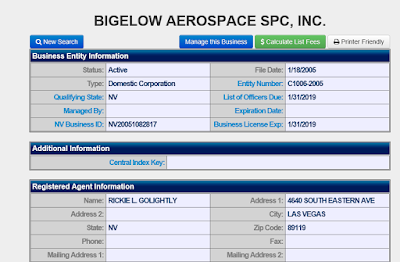 When I looked at who the officers were for this third entity, I found the names were: Having failed to locate any documentation that the AAWSA DIA contract was awarded to  Bigelow Aerospace Advanced Space Studies as suggested by numerous Internet sources; in such places as usaspending or the Department of Defense's contract awarded site; of on the Federal Business Opportunities 2008 archive website, I wondered if the contract had been awarded to International Space Hardware Services LLC or Bigelow Aerospace SPC, Inc?

However, a search of all the above websites for any contract awarded to any of these entities, failed to find any such documentation.

I thought that the next step was a request under the Freedom of Information Act (FOIA) to the US Department of Defense. I realize that this is likely to be a lengthy process, and that dozens of other researchers have already bombarded the DID through the DoD. I even know that some have asked for a copy of the DIA Bigelow contract, which is the same thing I am searching for. However, it is worth the effort, so today I submitted the following request:
A copy of the contract resulting from solicitation number HHM402-08-R-0211, dated 18 August 2008, issued by the Virginia Contracting Activity, on  behalf of the Defense Intelligence Agency, for the Advanced Aerospace Weapon System Applications program.

Now for the wait. Or do we need to wait?

On 4 May 2018, KLAS TV in Las Vegas carried a news item, and written report by George Knapp.
Among various documents flashed across the screen was the image below:

This partial document would appear to show that Bigelow Aerospace Advanced Space Studies LLC was the "Contractor/Offeror." However, it is possible that this is a copy of part of the submission for Bigelow for the AAWSA contract, and not part of the contract they were awarded. However, seconds later another part image appears as below:

As you can see, section 26 of this form "Total Award Amount (For Govt. Use only) shows a figure of $10,000,000.00 which seems to indicate that this is indeed an image of part of the awarded contract.

So, does KLAS TV have a copy of the actual contract? Perhaps a concerted campaign of emails to the station might release a copy? Over to blog readers to see if they consider whether this approach is worthwhile.
By Keith Basterfield at May 27, 2018