I previously reported that I had located a copy of the 2008 Defense Intelligence Agency (DIA) Advanced Aerospace Weapon System Applications (AAWSA) program "solicitation" which called for bids to undertake the work in this area for the DIA. My blog post reported some of the details contained in this "solicitation." Since then, I have continued to look for further "solicitation" documents. I can now report that I have located a fuller version.

This 32 page document titled "Solicitation/Contract/Order for Commercial Items" is a 32 page document calling for bids for the AAWSA program work, and was issued by the Virginia Contracting Activity, the contract arm of the DIA, on 18 August 2008. Later, in this post, I will provide a link to the document so that blog readers may examine it, in its entirety. Others may well pick up important points that I have so far missed.

On 4 May 2018, KLAS TV Channel 8, posted a story to the LasVegasNow website, titled "I-Team: Documents prove secret UFO study based in Nevada." Embedded in the story was a video of the story going to air. During that five minute news segment, a number of documents were flashed onto the screen. I can now say, that some of these snapshots, came from the document I have just found, for example: 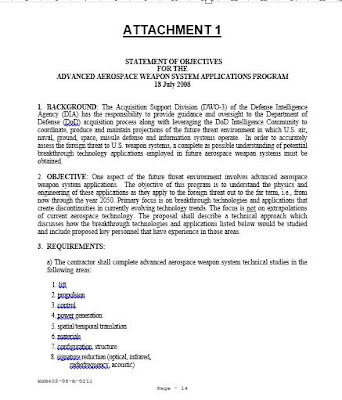 The source of some of the other KLAS TV item documents, is still to be determined.