I have been continuing my examination of the electronic files of former US researcher Dr. Michael Swords, who kindly provided me with a copy of these extensive files. There are numerous Australian cases amongst this material, which I have slowly been going through.

This post examines an apparent abduction experience, one of the reported earliest for this country. For a comprehensive catalogue of Australian abduction accounts, take a look here.

The source for this particular early Australian abduction account comes from Sydney researcher Bill Chalker, who included it in a piece he wrote for Australian "Penthouse" magazine of November 1989, page 37.

The event took place near Hughenden in Queensland, see the Google map below.

It involved a then twelve year old girl, given the alias of Miss L. She was crossing a paddock on the family farm when she felt a strange force upon her, and she heard a "humming" sound. She felt as if she was being lifted off the ground and fainted.

She awoke to find herself in a large, strange room. The room was not furnished. She noticed an arched doorway leading into a corridor; that there were porthole-like windows along one wall, and that the room had no joins or seams.

After surveying the room, which featured a coloured galaxy display on one wall, the girl felt enormous pressure and again lost consciousness.

She found herself back on the farm, but in a different paddock, with a huge saucer shaped object j=hovering above her, before it rapidly ascended to the west. The girl believed that two hours had elapsed since she initially lost consciousness.

It was therefore with some surprise that I found that amongst the Swords' material were three pages of documents related to this case.

Document one was headed "UFO 1956 Cressy Station, Hughenden, Australia" and a signature which looks like "F Jedlicko." This appears to be a plan of the object as seen from above. 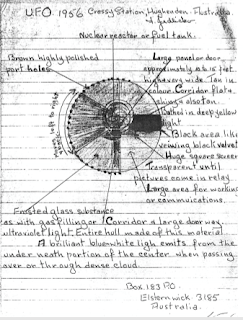 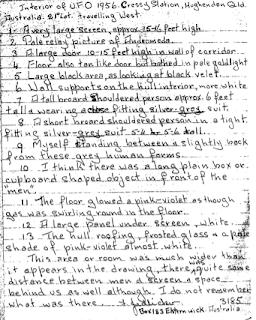 It is signed in the same name as document one shows, but provides the address Box 183, Elsternwick, Australia 3185. I assume this is the postal address of the witness, who at this stage, post 1956, lived in Victoria and this is why the Victorian UFO Research Society looked into the report.

Document three is a sketch with numbers, showing the girl and the two entities and various features of the room she was in. 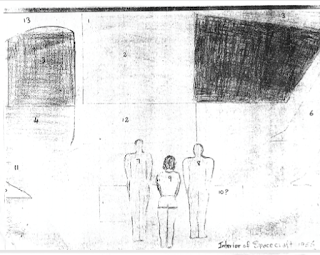 A fascinating insight into this very early Australian abduction account. It is a pity that most of the VUFORS archives were lost with the passing of VUFORS researchers, Paul Norman and Judith Magee.

1. A search of 163 graziers listed for the Hughenden, area of Queensland, listed in the current Telstra yellow pages failed to locate a current station named "Cressy Station", or any owner whose name was similar to F Jedlicko or F Fedlicko.

3. An Internet search for a "Cressy Station" located a 1963 paper concerning a Cressy Station in the Great Artisian Basin, Queensland located at latitude 21.8 deg S; longitude 143.8 deg E. This location is SW of Hughenden.

4. Further search turned up an R S Blacket, Cressy Station, Corfield, Qld 4733. This is apparently Rob and Roslyn Blacket Corfield is to the SW of Hughenden.

5. This Cressy Station is located near Winton, to the SW of Hughenden 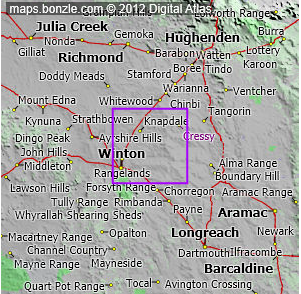 A more detailed map is shown below: 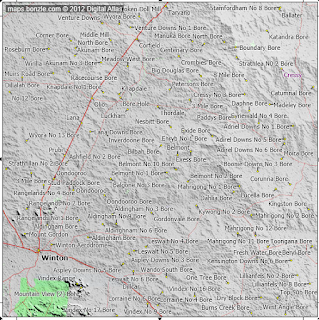 6. In my search for Cressy Station,  I then turned to the National Library of Australia's TROVE digitised newspaper collection . I searched for "Cressy Station" and found:

a. "Telegraph" (Brisbane.) Wednesday 13 September 1939, page 17. Owners of Cressy Station, Corfield are a Mr and Mrs R Logan, and son Alan Beaufort Logan who was then marrying Lucy Beryl Wedgwood.

7. The My Heritage website records the fact that Alan and Beryl had four children. I had my genealogy expert take a look for details of the four children.

We were only able to establish that one was a Brian Charles Logan; who was born in 1942 and died in 1946. We couldn't find any details on any of the other three children.

8. However, it would seem reasonable to me, that if Alan Logan married Beryl Wedgwood in 1939 then it is possible that they had a daughter who was 12 years old in 1956, a Miss Logan, our "Miss L." of the VUFORS report.

9. The name on the VUFORS held paperwork, F Jedlicko or F Fedlicko, or some similar combination of letters, could potentially be Miss L's married name, at the time she was interviewed by investigators from the VUFORs.

10. Can any blog readers throw any more light on Miss L's identity?

Email ThisBlogThis!Share to TwitterShare to FacebookShare to Pinterest
Labels: Abductions