The late Dr. James E McDonald visited the former USAF's Project Blue Book on a number of occasions and gathered together a collection of sightings, which interested him. I published a blog back in February 2017,  about this aspect of his UAP work. As one of my 2018 projects, I am revisiting my earlier work on these selected Blue Book files.

This blog post concerns one of the cases McDonald saw some value in, namely an observation by a weather observer, at a place called Pueblo, Colorado in the USA, which is near Colorado Springs.

Why bother re-examining these old cases? Well, they generally provide  me with data based observations, as opposed to sightings mentioned on Face Book pages, which provide hardly any data points. Secondly, it is always good to revisit/reanalyse cases, to see if a potential mundane explanation has been missed.

At 10:46am Mountain Standard Time (1746UTC), on 14 June 1958, a Pueblo, Colorado [latitude 38.28 deg N; longitude 104.6 deg W], airport weather observer, Orville R. Foster, aged 51 years, was observing a pilot balloon through a theodolite. He noticed an object enter the field of view at elevation 24.2 degrees,and azimuth 67 degrees (ENE.) He tracked the object across the northern sky (maximum elevation estimated as 50 degrees) on into the SW sky. Here he lost it in atmospheric haze at elevation 8.1 degrees, azimuth 237.2 degrees. The duration of the event was between 4-6 minutes.


The shape of the object at highest elevation was circular, with an apparently flat ring around the object, and a rounded dome in the middle. It appeared white to silvery white in colour. No metallic lustre was noticed. There was no smoke, no noise,no exhaust, and no vapour trail. There were cirrus clouds present at an estimated 30,000 feet and at times it went behind these.

The upper air winds during that day were from the SW - which is opposite to the direction that the object was travelling in, therefore it was going against the wind.

The observer noted that he had seen high altitude balloons through a theodolite before and this didn't look like them. On the USAF proforma Foster estimates its speed as a minimum 540 mph and, provides an estimate of its diameter as 30 feet.

The PBB file which I obtained a copy of, courtesy of Melbourne based researcher Paul Dean, showed two trains of thought about the nature of the object:

1. In a letter to the observer dated 14 July 1958 PBB made the statement that many qualified observers had mistaken a high altitude balloon for a UFO. It also stated "Routine checks and research disclosed that an upper-atmosphere balloon, flight No 161, was tracked continuously by the facilities of the AACS and last reported in the vicinity west of Pueblo between the 14th and 15th of June." Here, PBB was suggesting it might have been a high altitude balloon.

2. PBB "Routing slip" on the file stated "This is a toughie. I have approached it from every scientific and logical angle..after performing checks of a/c schedules (both military and civil), radar units, tests and operations, GCC, and others all showed negative..If no resolution, this will be one I must place in the category of 'unknown.'"

The "Project 10073 Record Card" conclusion is shown as "unidentified", "unknown."

1. If we assume that the object was at a minimum altitude of 30,000 feet, then we can calculate its range at three points.

a. Initial position of ENE sky at 24.2 degrees elevation.

b. Intermediate position in northern sky at 50 degrees elevation.

If its actual altitude was above 30,000 feet, then these ranges would be greater than the figures shown.

2. We can calculate an average angular velocity across the sky.

190 degrees of arc traversed. Time taken, between 240 and 360 seconds.
Therefore average angular velocity was between 0.53 and 0.79 degrees per second.

3. In order to calculate an actual speed, we would need to know an actual figure for its angular velocity at one of the three known distances. We do not have this data.

However, Foster does provide a figure of a minimum speed of 540 miles per hour on the USAF profroma. This suggests that he used some form of average distance and angular speed to calculate this figure.

a. At the surface - as stated by the observer. 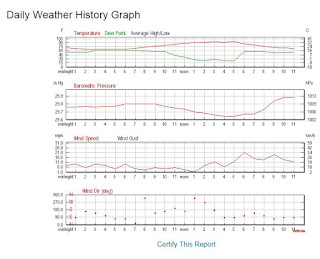 The observer stated "Upper air winds during the day were from the south west quadrant."

I checked the University of Wyoming's global upper air readings database for Colorado Springs for that date. Unfortunately their records do not go that far back.

US researcher Barry Greenwood located and forwarded three documents from his archives, which show that McDonald followed up the sighting in June 1970. 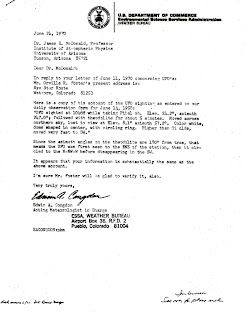 He contacted the US Weather Bureau in Pueblo, Colorado and asked them to check their logs for the sighting. The response stated that their observation log for 14 June 1958 contained the following entry: 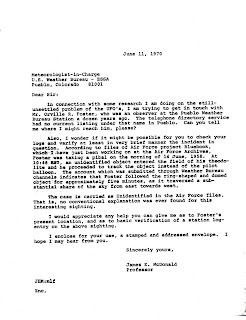 There is a note that these azimuth readings are 180 degrees from true. Weather theodolites had South as 0 degrees azimuth.

With an address supplied by the Weather Bureau, McDonald wrote to Foster proposing a date for a telephone interview. We have no records of this interview, if it occurred. 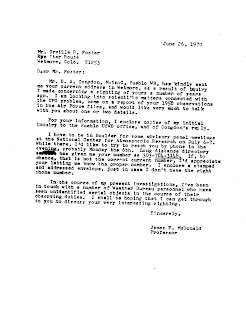 An unusual object travelled against the upper air winds, at a speed which the observer estimates as at least 540mph, and was described as circular, with an apparently flat ring around the object, and a rounded dome in the middle, with an estimated diameter of 30 feet.  It appeared white to silvery white in colour. No metallic lustre was noticed. There was no smoke, no noise,no exhaust, and no vapour trail. The observer was adamant it was not a high altitude balloon.

I can see why PBB allocated it to the "unknown" category.

I wish to thank Robert Powell, and other members of the NICAP forum for their kind comments on my initial data analysis, which has been amended above based on their comments.

I also wish to thank Barry Greenwood for locating the documents which show James E McDonald's follow up of the sighting.
By Keith Basterfield at April 17, 2018