When Melbourne based researcher Paul Dean, and I, ceased compiling the Australian national level sighting listings, we said that we hoped to bring you details of any future significant Australian sightings. Here is such a report.

It was lodged with UFO Research (NSW) Incorporated, and followed up by Anthony Clarke (with some specific questions from myself to the witness). Anthony has integrated the original report and the responses he received from the witness. The witness also kindly provided a sketch of what he saw. I welcome comments about this sighting, from blog readers. Thank you to UFO Research (NSW) Incorporated for permission to reproduce the report.

Sighting of Boomerang Shaped Object at Collarenebri, NSW, Australia at 9 pm on 4 February 2016

My Uncle and I were on a road trip to the outback of NSW to paint on a property just to the North of Broken Hill, NSW Australia.  We had driven from Maroochydore, Sunshine Coast, Queensland and had decided to camp for the night at the football oval camping area near the Barwon River at Collarenebri NSW.  The football oval is on the opposite side of the Barwon River to the township of Collarenebri.

At about 9 pm we had retired for the evening, my Uncle was sleeping in the rooftop tent on my 2005 Hyundai Terracan, 4WD vehicle and I was sleeping on a mattress inside the rear of the vehicle, with the windows and rear door open and covered in fly-screen, my head towards the front of the vehicle.
I was laying down and looking at the stars to the North East, when I saw a thin, light blue and grey smoky coloured object appear, about 20 metres above the treetops.  I think it would have been about the size of the full moon, with the foggy part extending each side, to make it appear bigger.  The object could have risen from the ground, when I first noticed the object it was above the trees a couple of hundred metres to the North East of my position.


The object rose in the night sky and moved closer towards our position.  It appeared to be a flock of Corellas at first, as I had mistaken the movement of the lights to be white wings of birds.  As it came closer I could see that it resembled a Boomerang shape and had multiple revolving white lights on its underside.
As the object got closer, and higher in the sky, I could see that it was a translucent, cloudy, fog like, and boomerang shaped, with multiple white revolving lights underneath, about as bright as stars.  No noise was heard when this object moved overhead about 30 metres above the treetops.  I pushed my head out of the flyscreen which was covering the gap of the open, rear, passenger side window and I watched it go over the top of the vehicle until I could no longer see it.


The lights on the underside were about as bright as stars in the Milky Way, which were surrounding it, maybe that is why I say that it appeared translucent because the intensity of those lights were not dissimilar to the stars.
The object was about 30 metres across and about 8 to 10 metres thick in the middle of the Boomerang V shape.  It moved very quickly and smoothly, I observed the object for about five seconds while it silently and quickly headed in a Westerly direction.  It appeared to accelerate and kept accelerating as I was watching it, over a period of about five seconds from the time I first saw it.  I could definitely see the underside at this point in time, which was covered in about 20 revolving white lights, which were brighter in the middle.  I could see that it was a Boomerang shape and it was translucent, in that I could see through it, although it had lost its cloudiness by this time.


The area where the sighting occurred was completely dark, the lights of the toilet block were not on and we were some distance from town.  I wear glasses for reading and was not wearing them during the sighting.
There had been a shower earlier in the afternoon, but at the time of this sighting, there were no clouds in my field of vision, the wind was a slight breeze coming from the West.

The next day, before first light, my Uncle and I were awake and up, it was the first opportunity I had to tell anybody about what I had seen the previous evening, so I told my Uncle this exact account. Also, when we arrived in Broken Hill later on the 5 February 2016, I again told this exact account to my friend.
Personally, I was an agnostic towards the existence of these types of objects, but am now convinced that there are other intelligent life forms in this Universe.  Whatever or whoever was responsible for building and operating this ‘craft’; is not terrestrial, as it was not something we humans are capable of manufacturing at the present time.


I have painted three views of the object: 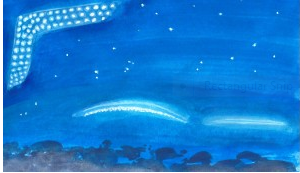