Apart from sightings which I have posted about, namely Roebourne in 2007; Broome in 2012; and Exmouth in 1992/1993, I have received details of other sightings from the same general area. Unless otherwise indicated I have been in direct touch with the witness.


Exmouth. Late 60's or early 70's
"My father and his friend travelled around Australia in his early years. He was in his late 20's I think. He was able to get work at Exmouth setting up the communications, this is where he and about another 200 people witnessed a craft directly above them. The Americans would set up an outdoor picture theatre for the staff, every weekend, and whilst they were watching the film a craft appeared above them. Left at an unbelievable pace. This is the story my father told me as a child. Would have been in the late 60's I guess or early 70's."
(Report from daughter to Mariana Flynn, UFO Research NSW Inc.)

One night, a woman was advised of a family member who had died. She left home about 11pm and was driving alone on the main road to Exmouth. She noticed a bright, single,  light approaching her vehicle. She flashed the lights of her vehicle at it. By now it was 1am. She switched on the spotlights of her vehicle. The approaching bright light went out at a distance of about 50 metres. Passing the spot where it had been she swung round and checked the road. She thought she may have run another vehicle off the road. However, nothing was to be seen. She travelled on in to Exmouth and stopped to report the incident to police there. They merely said, no problems, they knew of other reports of this mystery light.

Two girls were on a station, when during the early morning hours they need to go to the bathroom. They heard a sound - a magnified high pitched noise. They walked on to the patio and as they did so, noticed an unusual blue beam over the station's rubbish dump. Both of them saw this light and heard the noise. They were scared and cried. The "thing engulfed the sky." It was massive in size. Both screamed and ran into dad but they couldn't wake either him,  or the brother of one of them. The noise and beam scared them so they took a sleeping bag into a cupboard to hide. The noise went on. They told dad in the morning and he said "They won't hurt you."

"In office at work talking to secretary at about 10am (?) when we both looked out and saw a disc shaped UFO - brown and white alternating stripes (alternately radiating from centre of UFO, not many, say 4-8 stripes.)

Above the LIA flipping back and forth in the sky on about a 2 or 3 degree arc. I went out of the building to investigate and when I got to the bottom of the stairs and came out past the edge of the building next door it was gone...It looked like one of those discus's we threw for sports at school. When I got back upstairs I said to the secretary "Where did it go?" She said it just disappeared.

"Going to 8 ball one night I was at a lady's place in Karratha....Just walked out of the house with two 8 ball friends when I looked into the sky and there was a very brightly lit light doing spirals in the sky to the north but quite close.

"My friends were in front and had peeled off to the left to walk to their car just up the road. I didn't say anything but was strangely at peace and glad to see the light. Initially, my logical brain thought it was a helicopter but knew it couldn't be. Maneuvers were too extreme. It then just disappeared.


Barrow Island. 2015(?)
I received the following photograph from a man, who told me that the Chef on his Oil Rig tender boat took this photograph, while the boat was at anchor off Barrow Island. 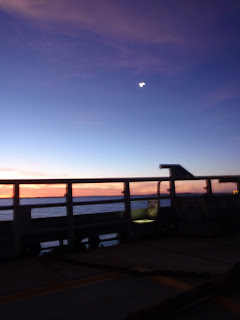