The sighting was initially reported by email directly to Keith Basterfield, shortly after it happened. The email read:

"I was driving along Sneydes Road, Point Cook towards my local IGA supermarket when I noticed a strange object moving south to north just below the cloud line. It was a shiny, silver 'ring' or doughnut for lack of a better word, and it was flying about the same speed as a commercial airliner. It made no sound and had no vapour trail.

I quickly pulled over and stopped in a quiet side street, got my phone out of the car and began filming it. As I was filming I realised I could see the object by naked eye but it wasn't shown up in my view finder.

The 'ring' was flying vertically at a consistent speed and at first I thought it might be a balloon but quickly realised the wind was blowing in the opposite direction this object was flying in.

The object also began to rotate on an angle so that at times it appeared as a ring and then as a straight vertical line then rotate back to a 'ring.'

Paul Dean telephoned the witness within two days and spoke to her to gather additional information. The witness was most co-operative at all times with our investigation, being very puzzled as to what she had observed.

Additional information secured by interview was:

- The first person she told about the sighting was her husband and she told him "I think I just saw a UFO."
- The object was below clouds, not in them.
- Total duration of the sighting was 5-6 minutes.
- She has excellent eyesight.
- After the object had disappeared from view, she stayed around for a while in case it returned.
- She turned off Sneydes into Florey.

Over the course of the next few days both authors communicated with the witness by email and asked a series of questions, to which the witness promptly responded. These questions and answers are listed below.

Q1 Which direction were you travelling in?
A1 Travelling east.

Q5 Did its brightness change?
A5 Never changed brightness. But stood out very clearly against the clouds.

Q6 How did you lose sight of it?
A6 It disappeared behind a thick bank of clouds.

The witness also advised that a more accurate track for the object was from south-east to north-west.

Investigation
1. WebTrak
The Air Services Australia WebTrak secondary radar website was consulted for that day and time. The program was run between 1500 and 1600 hours on Sunday 23 August 2015, and the area around Point Cook was examined. The following screen shot is for 1530 hours. 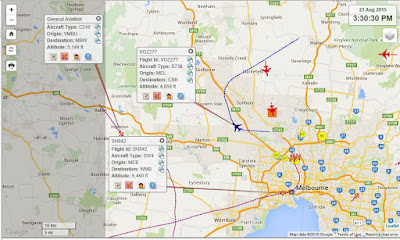 Between 1500 and 1600 hours, only three aircraft passed near Point Cook:

3. At 1548 hrs another light aircraft flew north-east to south-west, almost directly over Point Cook at 3100 feet.

We secured weather details from the Bureau of Meteorology. The closest weather station listed is at RAAF Laverton, 5.9km from Point Cook. Station number 087031.

At 9am the temperature was 10.9 deg C; 91% relative humidity, cloud cover was total; and the surface wind was from the north-west at 9km/hr ; pressure was 1020.ohPa. 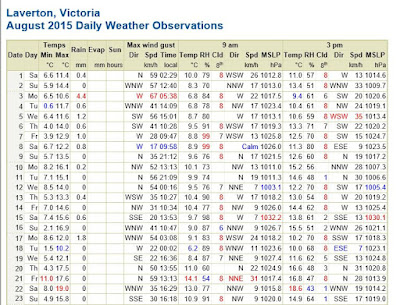 As we checked within three days of the event, we were also able to obtain weather details at half hour intervals for Laverton that day.

Laverton details for the time of the sighting, 1530hrs were:

We located a website which provides twice daily upper air soundings, measured at Melbourne airport. Here we find details which include the wind speed and wind direction for various heights above the ground. These are taken at 0000hrs UTC (1000hrs Melbourne time) and 1200hrs UTC (2200hrs Melbourne time.)

The following screenshot shows this data for 1000hrs 23 August 2015. Surface wind is from the north at 5 knots. Compare this to Laverton at 9am where wind is coming from the north-west at 5 knots, very similar data. 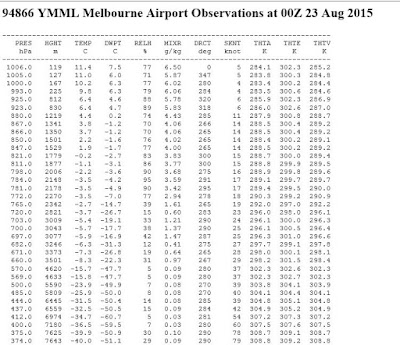 The next screenshot shows the data for 2200hrs that night, 6.5hrs after the Point Cook sighting. The surface wind is from 170 deg, almost south at 9 knots. Compare this with Laverton at 1530hrs wind from the south-east at 19kms/hr, similar data. 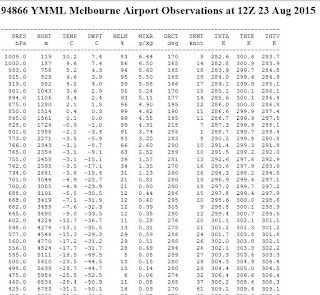 Primary radar
Paul Dean has submitted a request to Air Services Australia for primary radar data for the area on that day. It will take up to 30 days to process.﻿

An observation was made at 1530hrs Sunday 23 August 2015 from Sneydes Road, Point Cook, a suburb of Melbourne, Victoria. Initially it was seen at about 30 degrees elevation to the south-east. The object travelled south-east to north-west. The object, according to the witness was at all times below clouds and seen against the clouds. The object never changed size, colour or brightness. After a total duration of 5-6 minutes it was lost to sight behind a thick band of clouds to the north-west. Angular size was tiny compared to the full Moon. In appearance it looked at times to be a shiny silver 'ring' or doughnut shape. At other times it appeared to be a straight vertical line. The witness stated that it was travelling against the prevailing surface winds.


Analysis
The initial impression gained from all this data, is that the object was probably wind borne debris of some kind. The weather data, contrary to the witness' assertion, indicates that the object was moving with the surface wind direction. The small angular size, no change in size, colour or brightness, but changing geometry from 'ring' to vertical straight line, also, in our opinion supports this hypothesis.
Comments by Keith Basterfield
1. Recently, I was at a local shopping centre, when my attention was drawn to an object in the sky. It seemed to be reflecting the sun in a cloudless sky. I watched it for a while and had time to photograph it twice before I lost sight of it. When examining the photographs on my computer, I could make out an apparently round, small angular sized, white/silver light. However, there was no way from the photograph that I could have determined what I already knew it was. I had initially seen it at a closer range, and saw that it was a transparent plastic bag of some kind. Below are my two photographs I took. 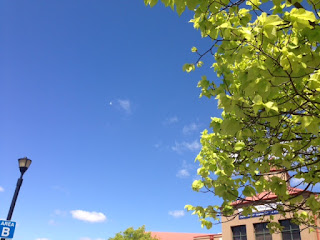 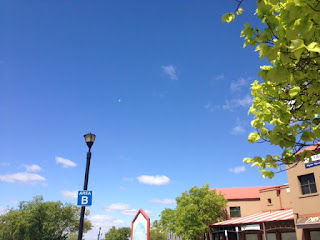 2. An excellent video, shot by Brad Morris of Melbourne appears on the Facebook page for "Melbourne UFO sightings." It captures an object at 1240hrs on 30 August 2015. It shows a silver/white semi transparent object heading north at high altitude. Brad's thoughts as to what it was were "I think it is safe to assume its a balloon."
3. My impression, from watching a number of videos of this kind, is that there is far more wind borne debris around in the sky than you would think. I have in the past, also seen cardboard boxes and plastic dry cleaning bags drifting through the air for several minutes. You can only be certain of what they are, by either having seen them at one point from a relatively close distance; or by the use of binoculars.
In conclusion
We welcome comments from blog readers on our analysis, and hypothesis that this sighting was of wind borne debris. Naturally, if there is radar confirmation of the object by Air Services primary radar, this may well change our preliminary conclusion.
By Keith Basterfield at September 02, 2015