It is not very often that I mention a non UAP book on this blog. I am about to make an exception.

A while ago, along with Melbourne colleague Paul Dean, I conducted some "cold case" research on an incident which occurred way back in October 1973, at a remote locality in Western Australia named North West Cape. I posted a series of articles describing what we knew of this incident; and some new original research, which included the details of one of the witnesses, who turned out to be an Australian citizen. These posts will be found at:

As you will gather from the number of posts on the incident, this was an impressive event.


New book
The subject of today's post is a new book titled "A Little America in Western Australia," authored by Anthony J Barker and Michael L Ondaatje, in 2015. It is published by University of Western Australia Publishing, Crawley, Western Australia. The ISBN if you are looking for a copy is 978-1-7425-86854. 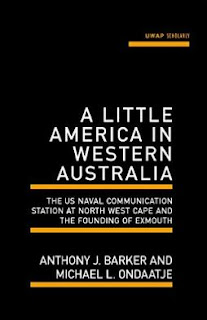 Anthony J Barker is an Associate Professor, and Senior Research Fellow in the History Department of the University of Western Australia, while Michael J Ondaatje is an Associate Professor, and Head of the School of Arts at the Australian Catholic University.
The topic of the book is what was initially called the United States Navy communications station at North West Cape, when it was first established in 1963. Later the station was renamed the US NAVCOMSTA Harold E Holt. The book tells the story from both political and social perspectives. We learn about both the construction of the base and the nearby town of Exmouth, which was created to service personnel at the base.
Source of information utilised included files from the National Archives of Australia; items in the media, and numerous oral interviews. It paints an excellent picture of life at the base and in Exmouth; against the political scene at that time.
Although there is no mention of the 1973 UAP incident in this book, for those wishing to set the incident in a broader context, this is a must read.