Today's post is about another new book. This one is titled "Unidentified: the UFO Phenomenon" subtitled "How world government have conspired to conceal humanity's biggest secret." The author is Robert Salas. The book is published by New Page Books; Pompton Plains, NJ. 2015. ISBN 978-1-60163-342-2. 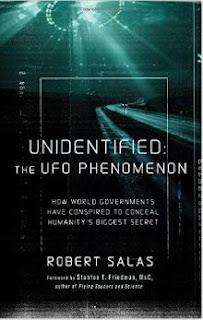 Who is Robert Salas?

In 1960 Salas attended the USAF Academy, in Colorado in the US (p.27.)  In 1967 he was stationed at the Malmstrom Air Force Base in Montana. In June 1969 he transferred from Malmstrom Air Force Base, to Wright Patterson Air Force Base in Ohio (p.37.)  After this he went to the Space and Missile System Organization at the Los Angeles Air Force Station. (p.39.) In 1971 he resigned from the Air Force (p.39.) In 1973, he went to work for the Federal Aviation Administration and was there for more than 20 years until he retired from government service in 1995 (p.40.)

He is best known for his involvement in an incident, while being part of a missile combat crew:

"It was one of those quiet evenings when the event occurred that would eventually precipitate my deep interest in the UFO phenomenon and become a part of my life for many years to come. Most of the details of that event of March 24, 1967, are in my book Faded Giant (Salas and Klotz). (p.45.) 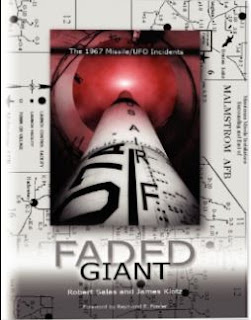 In short, during the observation of UAP, "I had the distinct feeling that something was about to happen to the missile systems... All of our missiles were indicating NO-GO; they were all disabled...Our equipment had somehow been tampered with from outside the capsule!" (p.46-47.)

Later, "I must emphasize here that in my own incident in Montana, just before my missiles were disabled and the UFO was still above the front gate to our Launch Control Center, I vividly recall pausing to look at my status board. I remember getting the distinct communication: We are going to shut down your nuclear weapons. I am convinced I, too, received that direct communication from an ET..." (p.206.)


What is the aim of the book?

"My objectives for this book are to review the secrecy - the distortion of the truth by governments - about the extra-terrestrial life that is visiting our planet and us." (p.21.)


What are Salas' views?

"Having accepted these realities, other possible realities present themselves. Not the least of these is that secret groups must exist within world governments, including our own, that are also well aware of these truths. And because there has been no official public declaration by any of them of the UFO reality, they are all effectively in collusion with each other in hiding these facts from the general populace." (p.16.)

"Therefore, I, without reservation, accuse the U.S. Department of the Air Force of a blatant, pervasive, and continuing cover-up of the facts; deception; distortion; and lying to the public about the reality of the UFO phenomenon." (p.75.)

From the aggregate of reliably reported incidents, I am convinced that our government and other governments have access to the physical evidence of extra-terrestrial craft and beings." (p.125.)

"The principal method by which government protects its secrets about the UFO phenomenon is by the simple claim that there is no "proof" of its existence." (p.132.)

"My thinking about the UFO phenomenon has evolved to where I now don't immediately discount any story that I hear." (p.142.)

As this post is about the book, and not researching the 24 March 1967 incident , I must say that I found new details about Salas and his experiences, of which I was previously unaware. I can now see how he comes to arrive at the position he holds on the phenomenon.
By Keith Basterfield at September 10, 2015