The National Library of Australia (NLA) undertook a major project, a few years ago, to digitise a large number of Australian newspapers. These are now available to view and search at their TROVE digitised newspapers site. The project ended up digitising many of Australia's current and past newspapers, up to the end of the year 1954. A few newspapers are available up to around 1990, but most are not.

If you go to the TROVE search area and type in the keywords "flying saucer;" "UFO;" or "unidentified flying objects" you will get a return of many thousands of entries. This blog has reported on the contents of many of these items, e.g. Australian pilot in Korea reporting UAP.

Recently, however, I came across a digitised copy of a newspaper from Papua New Guinea in the collection. Why is this of interest to Australian researchers? Well up till 1975, Papua New Guinea was administered by Australia. During that time, sightings of UAP were referred to Australia for investigation and recording.

During the period 2003-2008 when the Australian UFO Network (AUFORN) ran the Disclosure Australia project, members of the team were searching the Australian government's UAP files for sighting reports. Three relevant files were about Papua New Guinea: 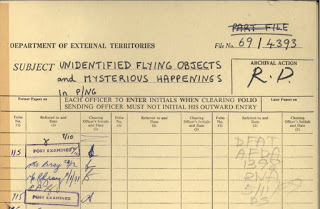 For the benefit of readers I thought I would present a representative sample of what was appearing in the main Papua New Guinea newspaper during its publication period of 1969-1981.

There have been frequent sightings of Unidentified Flying Objects in Papua New Guinea in recent months, Parliament was told yesterday. These sightings were confusing and worrying village people in the Central and Western Provinces and the Gusu Dumpu area of the Madang Province, the former transport minister Mr Jephcott (Madang) and Mr Kala Swokin (Western)  said during question time.

Mr Jephcott said that five UFO sightings were tracked on radar in the Gusap area by Air Niugini in December, and several others were reported in September...

Mr Swokin said the Defence Force should investigate recent sightings in the Central and Western provinces. The Defence minister Mr Duwabane told Parliament that his department will investigate and make a report..."

Sightings over Gaire village in Central province about a month ago are probably explained. Between 0315 and 0430 hrs on September 24, a group, led by National Capital police commander, Assistant Commisioner Mr David Tasion reported the UFO. However, a Qantas jumbo 747 flying between Tokyo and Sydney was at that time diverted to Port Moresby for re-fuelling. The Civil Aviation Authority believe this to be the cause of the sighting.

Two sisters at Angau Memorial Hospital, Sr. Bennan and Sr. Glynn viewed an unusual object at 0215 hrs on 18 March 1979. It appeared as a bright golden coloured, star-like object. It travelled across the sky; stopped, then continued, and made a U turn and went back the way it had come. The women called the police, but by the time the police arrived the UAP had gone.

A seven year old boy, Noel Bossiri of Baruru village reported seeing a big, bright light above a hill, at Kanudi at 2230hrs on 30 September 1980. He said that he woke to see the light and as he watched it, it landed on a hill and two human-like figures were seen. Noel said "the first to come out appeared silvery and the second was brown in colour." He was frightened by the experience and later told his parents of the sighting.

On 2 May 1974 a "50 yard strip of Bougainvillea and other plants were 'burned' by something and began to die off beside Mr Arthur Strachan's house in Sturt Street...his gardener reported seeing a strange object in the sky around dusk, on Thursday night. An area of grass near the plants has also turned yellow..."

'My overall purpose in coming to Papua New guinea is to see whether there is any difference in the UFOs reported in this part of the world and those elsewhere...'"

On 19 April 1974, a Mr and Mrs J W Wheeler reported seeing a bright, globular shaped light in the sky approaching them from the south side of the airstrip, at about 0600hrs. The light then departed in the direction of Lae. Half an hour earlier, a man at the airstrip reported seeing a globular light hover overhead for 25 minutes. It then split into two. One part was bright blue and moved off towards the mountains. The other part headed off towards Bene.

1. As can be seen from the representative sampling of newspaper accounts, the phenomenon being reported from Papua New Guinea was very similar to other parts of the world.

2. Item 6 from 1973 refers to the famous Boianai, Milne Bay District cluster of sightings in 1959 which included at least one CE3.

3. The reported radar sightings from December 1978 are not previously known to me. There was a classic observation reported in RAAF files [file series A703, control symbol 580/1/1 part 13, page 53] as follows:

The pilot of an F27 aircraft, VH-FNK, reported radar observations. On descent from 12,500 feet he noted echoes on his radar 60 degrees abeam to his plane. The radar was set to scan 180nm, and showed echoes at the 60nm range, from the aircraft and keeping station with him. There were five cigar shaped objects. With the radar scanner on maximum depression, the echoes disappeared. The Department of Civil Aviation advised that there were no other aircraft in that area.

I could find no record of a report by the PNG Defence Force about UAP.
By Keith Basterfield at January 09, 2020