In a Coast to Coast radio interview on 28 January 2018, between journalist George Knapp and Eric W Davis, Davis outlined his sub-contractor role within the Bigelow Aerospace Advanced Space Studies (BAASS)  program for the Advanced Aerospace Threat Identification Program (AATIP.) At the Institute for Advanced Studies, based in Austin, Texas, his job was to provide broad scientific advice, and recommendations. He did not get into any data analysis, video analysis or witness interviews.

He was tasked with looking into the future - around 2050 - to set up a series of expert studies - and produce a series of Defense Intelligence Reference Documents (DIRDs.) To look at a variety of topics and get experts to write a DIRD on that subject. Authors were asked to imagine our earthly technology, extrapolate it to 2050 and compare what we might have by then against what we see of the phenomenon today. Davis stated that 38 such papers were produced, with two being classified.

In another 28 January 2018 Coast to Coast interview by George Knapp, this time with Hal Puthoff, Puthoff stated that his role within the AATIP was mainly to look at the physics. He had had 38 papers written

On the Earth Tech International Inc. website there is a list of six DIRDs prepared by Eric W Davis. These are: 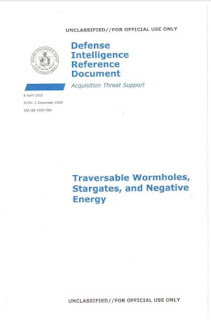 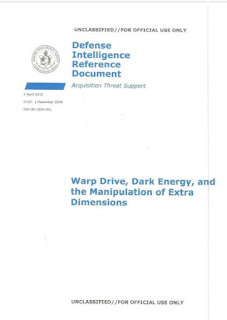 How do we know these are copies of the real, original documents? Isaac Koi posed this question to Eric W Davis by email; together with a copy of the two documents. Davis confirmed they were his documents.

The third DIRD, this one written by Hal Puthoff surfaced on 5 May 2018 as a link within a report by George Knapp and Matt Adams  It was DIA-08-1003-015 titled "Advanced Space Propulsion Based on Vacuum (Spacetime Metric) Engineering" and dated 29 March 2010. 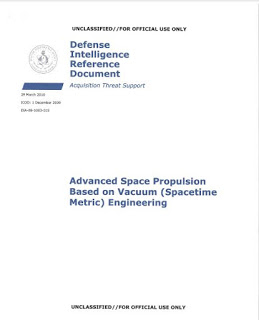 How do we know this is one of the 38 prepared DIRD's? I emailed Hal Puthoff; sent him a copy of the document, and he confirmed by return email that it was his original DIRD..

In summary, we know there were 38 DIRD's prepared. We have the titles of seven of these, and a full copy of three.

Have we knowledge of any other information on these DIRD's?

1.On his website Corey Goode stated that at one point he had the two Davis DIRD's above, plus three others (not described) but these three others had been stolen from him (no others details given.)

3. Hal Puthoff published a paper with the same title as his DIRD, "Advanced Space Propulsion Based on Vacuum (Spacetime Metric) Engineering" in 2010 in the Journal of the British Interplanetary Society.

4. In a talk entitled "Empty Space: The Multilayered, Multicolored Superconductor," by Eric W Davis at a conference titled "Modern Topics in Energy and Power", US Army Research Laboratory, in August 2016, referenced two DIRDs, namely DIA-08-1004-007 and DIA-08-1102-007, both of which we were already aware of, from Davis' Earth Tech DIRD list.

5. I searched the US website for the Defense Technical Information Centre for any of these DIRDs. There were two documents, dated 2004,  by Eric W Davis concerning "Teleportation Physics Study" and "Advanced Propulsion Study." However, I was unable to locate any of the six 2010/2011 Davis DIRDs or the one by Puthoff on this website.

A correspondent asked me what questions I would like answered about these DIRDs? My reply was:

1. Where did the funding come from for the work on the DIRDs? Was it directly from the DIA? From BAASS? From some other source?

2. When was the request received for the DIRD work to commence? Who asked for the work to be undertaken?

3. How many DIRDs were completed? How many were classified?

4. Who gave a number of DIRDs to Corey Goode? Why?

5. Who gave a copy of one DIRD to George Knapp? Why?

6. Who has a complete set of the DIRDs? Hal Puthoff? Eric Davis? Anyone else?

7. Has anyone obtained copies of all the DIRDs via an FOIA request?

8. Who are the authors of the non Puthoff, non Davis DIRDs?

Dr Eric Davis was interviewed by George Knapp on the "Coast to Coast" US radio show on 24 June 2018. During that interview, Davis mentioned that he and Hal Puthoff had arranged for 38 papers to be prepared.

The subject areas included, materials; metamaterials; warp drive; medical aspects; advanced nuclear fusion for aerospace propulsion (undertaken by colleagues at Lockheed Martin); and alternative nuclear fusion techniques. He went on to say that 2 or 3 of these papers had been "leaked" onto the Internet, by "someone on the beltway." The beltway is a highway that encircles Washington. A reference to "inside the beltway" means matters of importance to US government officials; lobbyists; and government contractors.

'In the 28 January 2018 interview on Coast to Coast, Davis says the following about the DIRDs: 'a colleague of ours, who was a former PhD student at (of-KB?) Werner Heisenberg, ah, did a paper on advanced nuclear propulsion..." This could be Friedwardt Winterberg. Here he is (http://www.icarusinterstellar.org/team/) along with Eric Davis and Richard Obousy (who authored one of the DIRD's with Davis.'

As my anonymous commentator stated, Winterberg was indeed a PhD student of Heisenberg's. I therefore located a list of Winterberg's published papers. The three known DIRDs were all published in 2010, and we know that Puthoff published an open source version of his DIRD, "Advanced Space Propulsion Based on Vacuum (Spacetime Metric) Engineering" in 2010 in the Journal of the British Interplanetary Society. Both Puthoff and Davis stated that 36 of the DIRDs were 'unclassified' and therefore there seemed to be no reason why DIRD authors should not also publish that work undertaken for the DIRD, in open source publications.

Therefore, I looked for any papers which Winterberg published in 2010, in the mainstream literature, that matched Davis' comments. There was only one, namely 'Deuterium microbomb rocket propulsion,' published in Acta Astronautica 66 (1-2), 40-44. I would suggest this may well have been the subject of another of the DIRDs.