A constant part of the message, that Luis Elizondo has been spreading about what he refers to as the Advanced Aerospace Threat Identification Program (AATIP) is that, if the phenomena itself is not a threat; then a threat might exist if the Russians or Chinese learn the secrets of the phenomena, in terms of military applications that might follow this discovery.

This theme of a threat from the Russians was repeated in the recent speech by Dr Hal Puthoff at the  Society for Scientific Exploration's recent conference, in Las Vegas, Dr Hal Puthoff mentioned that "...the Soviet Union had a massive program also trying to get to the root of all this...of course they had the same concerns we did. Is there a threat from the phenomena or might the Americans make headway before us and that be a threat?" In his talk, Puthoff referred to a document about a Soviet research program named "Thread-3." I searched around to see what I could find out about this Project.


The October 1993 edition of the MUFON Journal carried an article titled 'Soviet UFO Secrets' authored by one Bryan Gresh (The English Flying Saucer Review, volume 39, number 2, Summer 1994 also carried a reprint of the MUFON Journal article.) It is a report based on a trip, undertaken in March 1993, to Russia with a view to seek out 'a new layer of information about Russian research into the phenomenon.'

They interviewed a retired Russian Colonel, Boris Sokolov, who between 1980 and 1990 ran a UFO study program. 'Solokov says the military was interested in UFOs for a number of reasons, including the belief if the secrets of the UFO could be discovered, the Soviets would be able to win the competition against prospective enemies by incorporating what extraterrestrials knew of velocity, materials - and stealth. Sokolov told us the search for stealth technology was prompted by the capabilities of UFOs.'

Gresh's article then moves on to 'The Ministry of Defense official who is in charge of the current program...we can give the name of the study 'Thred-3...' In the documents obtained by Gresh and Knapp, there is mention of sightings by Cosmonauts.

I reached out to the UFO community to see if anyone had a scanned copy of any 'Thread-3' documents. Researcher Mikhail Gershtein responded that in the 1994 MUFON Symposium Proceedings, there were three relevant pages, which he provided to me. I reproduce these below: 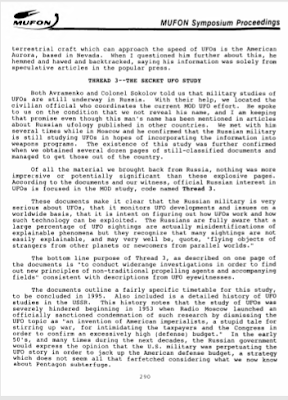 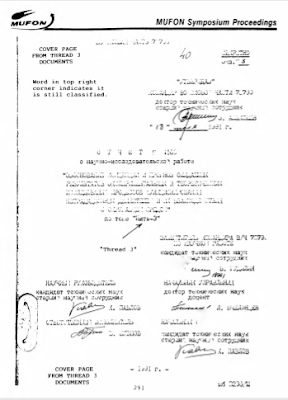 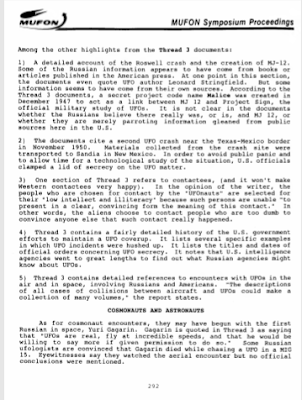 '...we obtained several dozen pages of still-classified documents and managed to get these out of the country..'

'The documents outline a fairly specific timetable for the study to be concluded in 1995.'

Other highlights of the 'Thread-3' documents were:

* Information on the Roswell crash
* Another UFO crash in Nov 1950 on the Texas/Mexico border
* Contactees
* US government efforts to maintain a UFO cover up
* Sightings by cosmonauts and astronauts.

A few of the "Thread-3" documents discuss some cosmonaut sightings, although it must be clarified that they are based on public statements by Marina Popovich and other Russian ufologists, and not on internal data obtained by the Ministry of Defense…Back to the "Thread-3" documents, it mentions an audio tape of the conversations at 0.14am on June 17 1978 between cosmonauts Vladimir Kovalenok and Alexander Ivanchenko on the Salyut-6 space station and Mission  Control outside Moscow..."

'The last category of documents obtained by Knapp are not part of the old Soviet Ministry records kept by Col. Sokolov, but part of the "Thread-3" project undertaken since 1991 by the current Ministry of Defense.

These documents were actually smuggled out of Russia by Knapp, and their style and contents are quite different from the previous project. They consist of a number of reports not so much on individual UFO cases, but on a variety of topics such as the history of UFO research in the USSR and Russia; propulsion and "non-traditional" engines and "the possible application for the creation of military and industrial technical devices;" a brief review of American documents and popular Western ufological research; analysis of the messages and philosophical outlook of some Russian contactees; reports and rumours of UFO sightings by Russian cosmonauts; and so on...'