An Australian witness to a 1926 sighting in the UK

I was re-reading a set of hand written notes by US researcher James E McDonald, which he wrote while in Australia in 1967. This material was obtained many years ago when a group of US researchers, including Dr Michael Swords, reviewed the McDonald collection at the University of Arizona.

Some of the notes were made at the same time that McDonald was interviewing witnesses to selected Australian sightings. 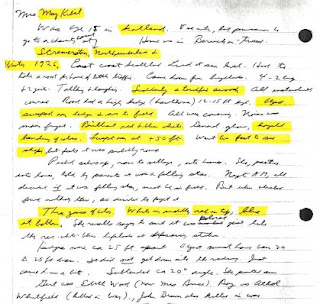 One of the sightings documented was from the UK in 1926! I thought it would be of interest to provide the details which McDonald recorded. McDonald's handwriting is very difficult to read at times, so in the following text, the use of (-) indicates that a word is illegible to me.

The individual whom McDonald interviewed was Mrs Mary Kibel of Melbourne.

'Was age 15 in Scotland. One (-) but permission to a charity concert at Scremerston, Northumberland. Home was in Berwick on Tweed.

Three zones of color. White in middle, red on top, blue at bottom. She recalls saying to aunt it was colored just like the red-white-blue lifeboats at (-) station.