The late Professor James E McDonald often debated the issue of whether or not there was a UAP "cover-up" or a "foul-up." By this, he meant was there an orchestrated campaign by officialdom to withhold information from the general public? Or, was there simply lack of care within government administrative processes? Put simply, "their left hand did not know what their right hand was doing."


Australian examples
﻿
Since the days of McDonald, many other researchers, including myself, have pondered the same question. I'll provide some Australian examples, from my own experience. Are they deliberate actions of the cover-up of events; or just bureaucratic errors?

(1) In 2004, I was informed by the Australian government Department of Transport that their file on the disappearance of pilot Frederick Valentich had been destroyed. In actual fact, the file turned up in October 2011, during a routine search of the holdings of the National Archives of Australia.
(2) Later in the 2000's, I supplied the Australian Security Intelligence Organisation (ASIO), through the National Archives of Australia (NAA), with a list of certain Australian UAP groups (including the Queensland Flying Saucer Research Society (QFSRS)). I sought any files ASIO held, on any of these groups. ASIO advised they held no such files. About a year later, an ASIO file on the QFSRS turned up in the NAA.
A new anomaly
Today, another such example was found. In 2004, I submitted an FOI request to the Australian Department of Defence (DOD) for a series of UAP files, for which I provided a list of file numbers.

Included in this list was a file numbered AF 84/3508. The DOD advised that they were unable to locate this file.

Paul Dean
Today, Melbourne researcher Paul Dean forwarded me the results of a recent FOI Act request which he had submitted to the DOD. Among a series of back and forth internal DOD emails, I noted a reference to 84/3508! Apparently, lost since 2004.
Here, in an email dated 16 November 2015 it clearly states that file 84/3508 is held by the DOD archives, having been renumbered as file 2007/1008750. 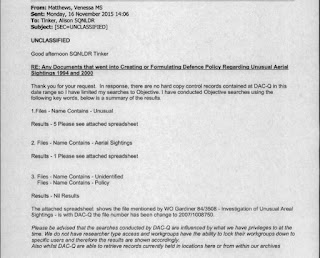 I have just submitted an FOI Act request to the DOD, for a copy of this Royal Australian Air Force file, citing their own 2015 email as evidence of the file's existence and location.
﻿
By Keith Basterfield at September 01, 2016