I recently presented this talk to UFO Research (NSW) Incorporated. They have uploaded it to Yotube. You will find it at:

UFOs: A VARIETY OF APPROCHES TO INVESTIGATION


I am going to start my talk by taking a look at four approaches to investigation. Those undertaken by governments; by science; by private enterprise and by civilian UFO groups.


A1: Firstly that of Governments


Over the years, many world governments have taken a look at the UFO phenomenon. Perhaps the most well known explorations are those of the United States, the United Kingdom and France. However, many other countries, such as Spain, Brazil, New Zealand, and of course, Australia, have, at times taken a look at the subject.

﻿
The term Government, is of course, very broad. It has, in fact, been very specific areas of Governments which have been the lead body. In some countries, such as Australia and New Zealand and the USA, the task was delegated to that country’s Air Force. In other countries, the task fell to the broader Defence Organisation. In the United Kingdom, Defence Intelligence Units assisted with both active field investigations and specialist knowledge. In yet other countries, such as Chile, civil aviation authorities have been the lead agency.


On the theme of investigations, I would now like to take a brief look at a number of cases which were investigated by various Governments.


Japan Airline flight 1628, was a cargo flight with a crew of three, and north of Anchorage, Alaska about 1700hrs local time. All three crew members described seeing unusual lights, which at times illuminated the cockpit.

The captain manoeuvred the aircraft but the object also turned. At various stages the object was level with the aircraft; appeared to jump from one area of the sky to another; was visible on the aircraft’s radar, and could not be identified by the crew.


Federal Aviation Authority officials, including the Division Chief of the Accidents, Evaluations and Investigations Division of the FAA, looked into the incident. The relevant radar data from the ground was obtained. John Callahan, the FAA Division Chief, found there were primary targets on the radar, which were in roughly the same time and place as the visual observations.


What did Callahan conclude? “During the playback of the event I clearly observed a primary radar target in the position reported by the Japanese pilot. But the radar signals were intermittent because the UFO was painted as an extremely large primary target and so the FAA computer system tracked the UFO radar return as weather. Regardless, the target could be seen near the 747 on and off for thirty one minutes.”


So that was Callahan’s viewpoint. However, what was the official US FAA conclusion? “The final FAA report concluded that the radar returns from Anchorage were simply a split image due to a malfunction in the radar equipment, which showed occasional second blips that had been mistaken for a UFO…it was just coincidence that the split image matched the UFOs position.”


A film crew aboard a New Zealand freighter aircraft, and its crew, observed and filmed a number of apparently anomalous lights in the sky. Unusual radar returns were also reported. US UFO researcher Bruce Maccabee visited New Zealand, interviewed visual observation witnesses; obtained radar and weather details and then published a detailed research report about the case. However, it is the response of the New Zealand government that I wish to draw attention to here.


Both the New Zealand Air Force and the Department of Scientific and Industrial Research looked into the events; interviewing primary witnesses and examining the radar data.
The NZAF stated “The unidentified radar and visual sightings reported by aircraft and the Air Traffic Control radars of the north east coast of the south island recently, are the result of natural but unusual atmospheric phenomena.”


The DSIR prepared a number of reports by various areas, bearing such impressive titles as “Optical quality of the windows of Argosy aircraft in relation to photographs with lenses of large aperture.”

This examined photographs of a bright object taken by the Australian film crew. The DSIR concluded that the object was most likely due to imperfections in the aircraft window causing natural external light sources to appear abnormal.


A second report “Photometric properties of an unidentified bright object seen off the coast of New Zealand” concluded that the most likely source of the bright light was a number of squid boats on the ocean surface. Their analysis disputed that of Maccabee and suggested that the observation are not inconsistent with a near stationary surface object.


In Trans-en-Provence, France, a man watched an unusual object rapidly descending with a whistling sound and land in his yard.


The object whistled again and took off. Immediately after its departure a circular ground imprint was noted.


The gendarmerie interviewed the witness, and collected soil and vegetation samples. The samples were examined by various government owned laboratories. Analysis of the soil indicated that strong mechanical pressure had been applied to the soil. Analysis of vegetation revealed changes to chlorophyll levels and other signs which seemed to suggest accelerated ageing of plants.


On 5 March 2004, a surveillance aircraft of the Mexican Department of Defence was conducting operations, when the crew observed “invisible” targets on their infra-red equipment and also viewed radar targets.


The best documented investigation was conducted by US researcher Bruce Maccabee. His research indicated that the first object detected by radar remained unexplained.


However, other radar targets seem to have been reflective objects on the ground. Many of the forward looking infra-red sightings were of objects much further away than the aircraft crew believed.


Some of these may have been distant oil field, gas burn off flames. 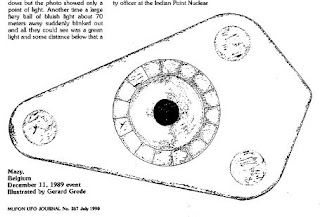 
Did the Belgium Air Force investigate the sightings? The answer is no. Brouwer stated “Although the defence minister insisted on a transparent approach, especially to show the public that there was no cover up, the Air Force was not authorized to establish a dedicated office for conducting its own inquiries.”


These five examples show the diverse responses by national governments to reported UFO events. The US government was dismissive; the New Zealand government suggested mundane causes; the French government conducted a serious investigation; the Belgium government cooperated with a civilian UFO group, and the Mexican government was embarrassed.

Section A2 – Secondly, the approach of science


Science as a field of human endeavour had its big chance to contribute to our knowledge of the UFO phenomenon, back in the 1960’s. It blew the opportunity.


I doubt if many of you in the audience have read the full report of the University of Colorado’s multi year, and multi hundred thousand dollar study of UFOs.


The United States Air Force paid for what was supposed to be a scientific review of the subject, but specifically whether or not UFOs were a threat to national security, and whether the further study of UFOs would contribute anything to scientific knowledge? The report concluded “no” and “no” to these questions. However, the study report was flawed as the overall conclusion did not reflect the rest of the content. About one third of the cases studied remained unidentified after analysis.


Since then, science as a field of study, has not undertaken another detailed look at the topic. There are however, individual scientists who have privately studied the subject, and many of these who do, find the phenomenon has unexplained aspects. I’d like to briefly mention two such individual scientists of whom you may not be aware.


Harley D Rutledge was the Chairman of the Physics Department of the Southeast Missouri State University. He became aware of a number of UFO reports coming in from the Piedmont area of his state. There were reports of stalled cars, television signal interference, and crowds of people were swarming to that area every night to see the UFOs.

As a scientist at a university, and thinking of his career, Rutledge debated whether or not to investigate personally. But he and others at the university ultimately decided they would investigate. They made an initial trip to the area and saw some unusual lights for themselves. They observed anomalous lights both from the ground and from an aircraft. Over the next several months, some 35 scientists, engineers, students and others associated with the university studied the phenomenon using a variety of scientific equipment. They were able to measure angular size, angular velocity and calculate the height of some of these lights.


This Project demonstrated that a scientific team with equipment could see, photograph and obtain data on numerous anomalous lights and a lesser number of structured objects, some seen during the day.


Another scientist, Frank B Salisbury was a US researcher in botany and biochemistry at the University of Utah. There were a series of both daytime and nocturnal observations of both lights and structured objects, some at close range. As a scientist, he decided to go to the area concerned and conduct personal interviews and research.  He later wrote “I could not think of any reasonable explanation to account for the objects sighted in the Unitah basin except for extra-terrestrial machinery.”

He also stated “The UFOs in the Unitah basin wanted to be seen. They performed for their witnesses. They put on a display. When we examine UFO accounts, however, we encounter events that just don’t seem to fit within our understanding of natural laws.”


In summary, individual scientists have undertaken field investigations and found there are indeed anomalies to investigate.

I gave this talk to UFO Research (NSW) Incorporated in 2016 and you may watch it at:
https://www.youtube.com/watch?v=S2kt0_gPZkc